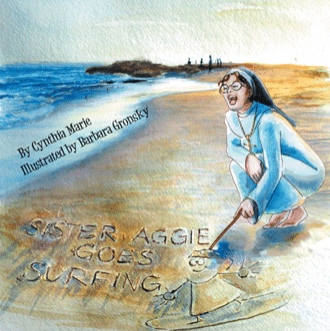 Early one morning as she watched the surfers, she saw someone struggling in the water. She jumped up to get a closer look. It was her student Billy Paul! He was gasping for air as the powerful waves crashed down upon him.  Without thinking, Sister Aggie dove into the ocean.

Swimming frantically to get to Billy, one of her shoes flipped off, her habit expanded like a giant balloon and her glasses fell to the bottom of the sea.

When Billy saw her swimming towards him, his eyes grew big in disbelief. He was amazed that a nun could swim through such powerful surf!

“Sister Aggie Goes Surfing” is an inspirational story about a fun loving athletic nun who helps a young boy have faith in himself and God while learning to surf along the way. Desperate to show his dad he can surf, Billy accepts Sister Aggie’s offer to teach him and prepare him for a surfing competition. Will Billy learn how to Surf? Can she help Billy go after his dream, have faith and never give up?

I am a cancer survivor.  At some time during my journey, I wrote this story to share the important message of faith and determination.  I want to thank my family and friends who helped assist and guide me in writing this book.

A special note of thanks to Agnes, who was the inspiration behind the character I named Sister Aggie.