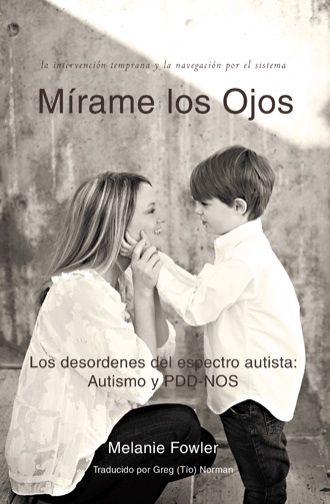 Melanie and Seth Fowler are parents of a six-year-old boy who has autism.  Melanie is not only a concerned parent, but is schooled in speech therapy, deaf education, and special education.  When the Fowlers found out their son was on the autism spectrum, they were like so many other young parents out there—scared, angry, confused, helpless. They felt like they were on an island.

While many books were given to them regarding autism, none was able to console the Fowlers in their time of grief and desperation.  Immediately they realized they needed to write a book that deals with immediate steps when dealing with a child on the autism spectrum.  Look at My Eyes is an insight not only into their lives but tells how to battle for insurance coverage, explains helpful, scientifically based therapies, and deals with quackery and harmful treatments.  The Fowlers discuss talking with relatives about a child who is autistic, they provide helpful websites and in-home training exercises, and encourage readers to be strong in their faith and rest upon the Lord for strength, grace and mercy.

Look at My Eyes has now been translated into Spanish.  Both English and Spanish versions can be found at www.lookatmyeyes.com.

The Fowlers live in Fort Worth, Texas, with their two children, William and Margaret and their new golden doodle, Charley Bear.  For more information: info@thefowler4group.com