A Guide for Fathers and Sons and Family Businesses 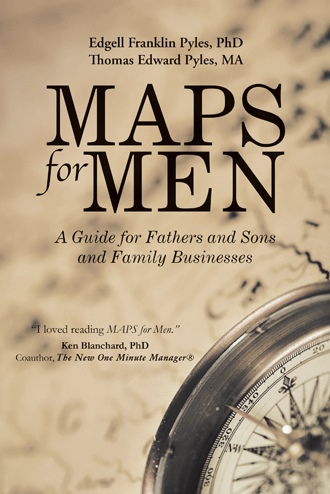 MAPS for Men, written by a father-son team, is a guide for fathers and sons as they create, manage, and preserve value in a family business. The father-son relationship follows predictable, evolutionary life cycles that can either produce significant advantage or create extensive discord. The authors apply psychological and theological models to interpersonal and economic activity. The organizing principle is that a positive relationship between a father and son will have a multiplying effect on the family, business, and community.

Most family businesses are an extension of the values and exchanges that started first in the family, and fathers and sons who work in the business are the day-to-day models. They need a psychological strategy for addressing their interactions, maintaining balance in their personal and professional roles, and overcoming emotional and economic challenges during intense situations. MAPS is a guide for these times. It is best practice to have an appreciation and understanding of the navigational basics before encountering the rough topography.

In 2011, there were five and one half million family-owned businesses in North America. That year, family businesses comprised more that 80 percent of all companies, contributed 57 percent to the Gross Domestic Product ($8.3 trillion), employed 63 percent of the workforce, and created 78 percent of new jobs. Non-family executives managed only 10 to 15 percent of the family firms. Male family members lead or will lead more than 75 percent of these businesses.

The tools in MAPS will help fathers and sons grow a family business, share authority, and pursue long-term cohesion and profitability. From a small construction company to a large manufacturing business, family firms are the pillars of our economic culture. If fathers and sons can address and appreciate their differences, create a strategy for handling difficult situations, and commit to a shared vision, this will have a reciprocal benefit for family members, and company employees and customers.

To show the correlation between father and son income opportunities, Dr. Alan Krueger, Princeton University economist and former Chairman of the Council of Economic Advisors, introduced the concept of the “Great Gatsby Curve” in his January 12, 2012 report, “The Rise and Consequences of Inequality” presented to the Center for American Progress. The data for the report came from labor economist Miles Corak of the University of Ottawa, who outlined income inequality, equality of opportunity, and intergenerational mobility from several countries in a study funded by The Pew Charitable Trusts in 2009.

The “Great Gatsby Curve” is a summary of all the processes that shape monetary earning in adulthood. The core concept is the inverse relationship between income inequality and intergenerational mobility and the reality that sons are very likely as adults to end up in the same place on the income and status ladder as their fathers. The social anchors required for wealth creation and preservation are financial, interpersonal, spiritual, and human capital investments. The opportunities and commitments in one generation amplify the possibilities of similar status in the next generation, but the advantages are not guaranteed or without risks.

An economic adage, “Shirtsleeves to Shirtsleeves,” predicts the loss of wealth in three generations. It is found in every culture, regardless of the fiscal cycles or tax structure. James E. Hughes, Jr., attorney, family business consultant, and author of Family Wealth: Keeping It in the Family, outlines a three-stage process of wealth creation, stabilization, and alteration over three or four generations. He advocates that the top reason for this failure is that family leaders concentrate on the family’s financial capital to the exclusion of its human and intellectual capital.

The transfer of family wealth has always been problematic, and the primary reasons for failure are psychological. In an effort to understand the issues, Roy Williams and Vic Preisser, authors of Preparing Heirs: Five Steps to a Successful Transition of Family Wealth and Values, interviewed members of families with a net worth ranging from $5 million to over $1 billion. The research determined that the major causes of financial collapse in family wealth transition have more to do with psychological patterns in the family than with legal, financial, or business planning.

The primary causes for failure are the following:

• The lack of mission and governance (8 percent of 70 percent)

Distrust and miscommunication are high psychological taxes on a family system and business and are emotional hazards for fathers and sons managing the business of being a family business. When trust and communication break down, the expense of doing business goes up. The extra steps needed cut into the profitability of the enterprise. Everything takes more time, creates costly detours, and adds to the emotional distress. Understanding the issues and taking pro-active steps to avoid problems is always more profitable than fixing what is wrong. The cost of fixing a psychological problem, at minimum, is a five-to-one ratio.

A study by Dr. Dennis T. Jaffe and his associates at Wise Counsel Research found seven core qualities among successful families with a net worth exceeding $200 million in U.S. dollars. These families fruitfully transitioned significant business or financial wealth through at least three generations, or over one hundred years, by sustaining the following merits:

• Commitment to Give Back to the Community

Much creative and constructive effort can be directed at crafting sophisticated trust documents, elegant business plans, and family constitutions, but the keys to implementation are locked up in the family psychology. The unresolved interpersonal issues between a father and son can rain down heartbreak on the most successful family business. The goal of MAPS is to help fathers and sons navigate the “Great Gatsby Curve,” avoid the “Shirtsleeves to Shirtsleeves” phenomena, and preserve relationship and wealth capital.

“MAPS for Men is a must-have resource for any and every family business.”

“MAPS for Men is a wonderful book full of superb insight and information.”

“I read MAPS for Men today, I should say that I devoured it – very interesting and helpful model for all of life.”

“MAPS for Men is a gift to all fathers and sons.”

“MAPS for Men is one of the most comprehensive guides to families in business that I have ever seen.”

“The transition of wealth concepts described in MAPS are immensely dynamic, relevant, and applicable!! It is a must read for all entrepreneurs!”

“What a wonderful piece of work. I found each chapter and the whole book incredibly meaningful.”

Dennis Jaffe, PhD, Author: Working With the Ones You Love: Creating A Successful Family Business.

Stewardship in Your Family Enterprise

Past President, Association of Humanistic Psychology

“The guidelines in MAPS will bear fruit for many years and generations to come.”

“Edgell and Thomas have created a book that will impact families for generations.”

“MAPS is truly a masterpiece!”

Past Member, Board of Managers, University of Virginia

“If you are a woman who wants to understand men better, MAPS is all you need to know!”

As a pastoral psychologist, Edgell has lectured internationally on father–son relationships. He consults with family business leaders concerning the psychological dynamics and strategies in a family business, especially succession. He is a Fellow at the American Association of Pastoral Counselors and Institute of Coaching Professional Association and a member of the Family Firm Institute, Inc.

With an undergraduate degree in Business and a Master’s in Psychology, Tom is an executive coach and fitness trainer. He works with health and sport organizations as well as individual clients. He is a member of the Institute of Coaching Professional Association, International Society for Coaching Psychology, and Corporate Health and Wellness Association.