War in a Bottle 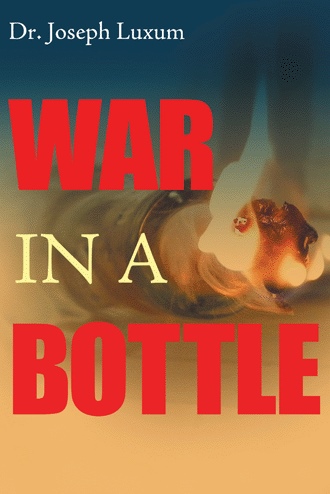 Preface
This book is about the supernatural peace of which Jesus frequently spoke. “My peace I give to you not as this world gives.” (John 14:27; 16:33) What’s so special about this peace since He made a point by emphasizing His kind of peace? He made still a much stronger case when He said that in the world we have tribulations and turmoil, but He had overcome this world. So how did He overcome this world?
When the angels proclaimed the birth of Jesus with words like, ‘Peace on Earth and good will toward man’ (Luke 2) and yet we have no lasting peace than what sort of a peace did the angels proclaim?
Jesus stated in Matthew 5:9 “Blessed are the peacemakers for they shall be called sons of God.” In Luke 13:20-21 Jesus compared God’s kingdom to a leaven that causes expansion of the lump and in turn the rising of the baked bread. The Son of God being the chief peacemaker said that He is the ‘bread of life that came down from heaven.’ Therefore, ought not the body of Christ be rather busy with that one particular peace ingredient rather than with the supposed heavenly wars?
Apostle Paul spoke of God’s sons in Romans 8; and that the entire creation longs for the appearance of the sons whom Jesus named as being the peacemakers. The popular theology gives us the idea that Lucifer rebelled against God and took with him one third of the angels suggesting that wars and upheavals came to us from heaven, but this is not clearly written in the Bible. Is it possible that the natural thinkers have interpreted the supernatural through just the physical faculties of cognizance? Wars on earth are quite frequent. Plots and intrigues need time and the obscurity of darkness. Dethroning and overthrowing of monarchs we find on earth, but can anyone plot in the realm of no darkness and of no time? Therefore only a mind accustomed to these earthly dimensions would naturally assume that heaven must go through the same?
In this book we will not even attempt to reconcile theology with the Bible—for it would take too many books to write—but rather attract our mind to logic, which is found in the heavenly peace.
Here is an example of my logic: if heaven once experienced war or upheaval then what guarantee do we have that the same heavenly sphere won’t succumb to it again? Therefore, what sort of a heaven are we preparing ourselves for? Or, what quality of a faith we ought to have? If the peace of which Jesus spoke is not of this world, but of His, then by contrast with the physical earth, the spiritual realm must be completely peaceful. In the same vain, our faith must not be self-produced, but rather be God’s gift, just as the scripture confirms it to be so. No one can come to Jesus unless it is the heavenly Father who draws him. (John 6:44) The faith in Christ the Messiah brings wholeness. Faith comes by hearing, yet it comes, for in 1st Corinthians 12:9 Apostle Paul declares that faith is indeed God’s gift to us.
Finally. Peace heals and restores while war divides and destroys.

The Supernatural Power of Peace

All people contain DNA. Recent studies have revealed that genes remember the past and to a certain extent can influence the present. The environment in which we live influences not only the development of our psyche but also the overall disposition in which genes play a larger role than previously thought.

In Matthew 5:9, Jesus declared: “Blessed are the peacemakers for they will be called sons of God.” Just as the Word suggests, it is not the war-makers that are blessed, but the peacemakers.

Whatever we scarcely pay attention to, as being unattractive and not dramatic enough to grab our attention, God chose to astound the world.

This book deals with the supernatural nature of peace, which actually heals and restores.

More than ever before, the modern lifestyle robs us of peace; as a result, people seek an escape from stress. Some find it in chemical substances; others in time off, relaxation, or meditation. But there is a peace that surpasses human understanding.

Like walking firebombs, which are bottles filled with petrol ready to go off, some people go through life without any purpose. As the title of this book suggests, the bottle must be emptied of all flammable substances; for only then one will find the much-sought-after commodity, which is the healing and restoring power of peace.

Dr. Joseph Luxum is a preacher and Bible teacher. For more than 22 years he lived in the Holy Land where he acquired a vast knowledge about Judaism and Christianity. As an author of many books Dr. Luxum opens your mind to things not yet considered and in that sense he reforms. His writing style is both academic and frank. He makes a blunt statement and then unravels a wealth of knowledge behind it. To the delight of those who are tired of religious redundancy Luxum combines science with logic and clear grasp of the world from which life emerged. He does not belong to any particular religion, he calls himself a child of God.