The Honorary Agents and the Mystery of the Rare Coin 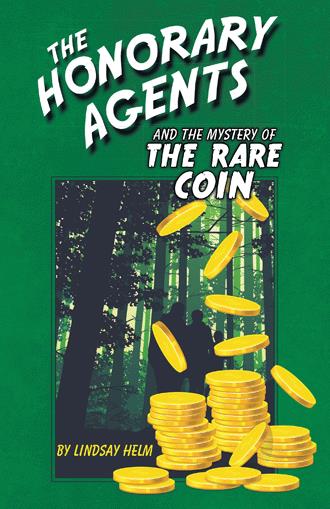 “Look!” cried David. “I think I see the Louisiana warbler!” Everyone looked upward on the line of the pointing finger. “See it?” David said. “It’s sitting on that branch. Right there!”

The group nodded in agreement and passed around a couple pairs of binoculars so all who wanted could get a closer look. After a minute or so, Mindy and Naomi walked down to the creek bank, and several others followed. They split up around the area, taking a little bit of time to explore before hiking another three miles to the campsite. Harm and Lynn took time to look around as well, showing their guests any of their finds. McCoy sat down on a rock outcropping several feet away from everyone else. His own strange discovery was one he wanted to keep quiet for now.

Feeling his tooth for the third time, McCoy was worried he would find it wobbly or bleeding, but he felt nothing yet. He looked down at the small, round coin lying in his hand. He had already wiped it off with a splash of his drinking water, and he wondered how in the world it had gotten inside his granola-rolla.

It’s just an old coin,he thought. It must have fallen out of Mr. Lendell’s pocket. It’s a little strange looking, but things that are old always seem a little strange looking. I can barely make out a date on it. Something like 1702. Wow, that is old! McCoy was looking at the coin, when someone called his name. He quickly got up and snapped the coin inside his pants pocket.

“Come here, and let me see if I got this right,” she answered as he walked up to her. She was bending over a small plant. “Is this poison ivy? I think I’ve only seen it once in my life, and I can’t remember if this is it or not.”

“Yep. You got it!” McCoy said. “It’s got three leaves coming from one stem, and one side of each leaf has a jagged or uneven appearance.”

“Cool. I’m going to look for some tree frogs. Catch up with you later.”

Drue walked off, and McCoy was again left alone with his thoughts. He wandered around but wasn’t really focusing on the nature around him. He was thinking about Mr. Lendell and hoping the police had been able to gather more evidence and information about the break-in.

The group slowed down their pace an hour before their campsite, so they arrived around 6:46 p.m., which was a little later than McCoy had hoped. He’d wanted to leave enough time for setting up, having dinner, and lounging before it got too dark.

“Okay, guys and gals,” Harm said, “our first order of business is to set up our tents. We have three tents and three people for each tent. The Cloak family, here is your tent. Chaz, David, and Lenny, your tent. And the three girls, here is yours.”

“We will tell you where to put your tent, but then we want you to work together to set it up,” Lynn said. “Girls, come with me. Cloak family, go with Harm, and the other guys will go with McCoy.”

Everybody seemed to work well together, except Chaz, who decided to sit by a tree to pout after Lenny and David told him that once they all got into the tent for bedtime, there was no talking—period.

“We’re on a fun camping trip, and you guys are treating it like some stuffy business trip!” Chaz said. “I want new tentmates.”

“Chaz,” David said, “we just want to get a good night’s sleep before our big hike tomorrow. That’s all.”

Chaz shook his head, but he was coming around. He couldn’t stay unhappy for long. He got up, helped push in the tent spikes, and then began unloading his sleeping bag. The rest of the groups were just about done as well, so McCoy whistled to get everyone’s attention.

“Once you have put your sleeping bags in your tent, I would like everyone to find dry brush lying around the forest floor. You will find a few other trees intermixed with the pine, so grab that up first. Pine is a softer wood and tends to burn quicker and hotter, but we only need the fire to cook a few things for dinner, so either way, it works.”

As the group busied themselves with the tasks at hand, McCoy called over Harm and Lynn.

“Hey, something a little strange happened today, and I wanted to show you what I found—or what found me.” McCoy reached for the coin.

“This isn’t one of your Sherlock Holmes moments, is it?” Harm said.

McCoy smirked. “No. It’s just one of those weird moments. I was popping a granola-rolla, when I bit down on something hard. I spit the glob of slobbery goo into my hand and found this.” He held up the coin.

“What is it?” Harm said, grabbing for the small object. “It’s an old coin. What? This was in your granola?”

“I know. Weird, huh? I can barely make out a date, but I think it says 1702. That’s pretty old. I guess Mr. Lendell dropped it into the batter by accident.”

It was Lynn’s turn to check it out. “Yeah,” she said, reaching for the coin, “but how would it just drop into the batter? Things like that don’t just drop out of your pocket unless you’re standing on your head.”

“Hey, Lynn,” Harm said, “look it up on your iPad. There’s got to be lots of information out there on old coins.”

“I can’t here. No service. Maybe tomorrow. I know of one spot heading toward Treasure Hook where you can pick up a signal.”

Dinner went smoothly. A few ate a concoction of corn, pinto beans, potatoes, and diced tomatoes, while others ate an assortment of snacks and small sandwiches they’d brought with them. Everyone seemed lighthearted, and conversation flowed easily. McCoy, Harm, and Lynn got to learn a little about each guest.

McCoy Saderly and his two best friends are preparing for a three-day hike in the Mark Twain National Forest when a thug breaks into a local candy store, attacks the owner, and snatches a mysterious black pouch from behind a wall. Now only one question remains: What is so valuable that someone would hide it in a store in Sherwood, Missouri?

As McCoy and his buddies make use of their status as honorary FBI agents once again, the mystery winds its way through the candy store, the lab of a zany scientist, the forest, and the seemingly long-forgotten annals of a historical community. When the mysterious pouch containing an odd pennylike coin with a smudgy residue is secretly put back, McCoy’s curiosity gets the best of him. Along with a new friend named Drue, who stirs up the mystery even more, the gang pursues the truth while a hidden foe tracks their every move. Will FBI agent Grady Frost get involved in time, or will the treasure hunt to the top of Bell Mountain be stopped before the mystery is solved?

Lindsay Helm loves taking young readers on mystifying adventures, which are inspired by her formal education and current work with children. Lindsay is the author of The Honorary Agents and the Mystery of the Stolen Artifacts and lives in Texas.