The Chronicles of Grace 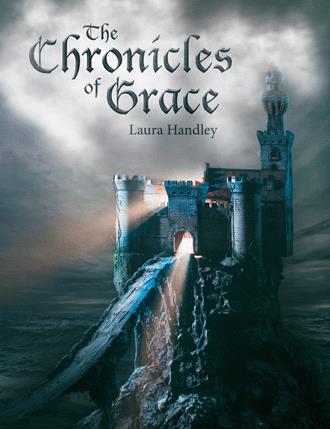 A torrent of frigid night air throws open the weathered shutters. An angry tempest reaches through the dark, overpowering me like a plague. Icy fingers attempt to strangle every molecule of warmth my body desperately clutches to.

Pulling my garment around me, I reach to secure the shutters as they continue to bang without mercy against the wooden frame, echoing through the solar chamber of the massive castle I call home.

The wind howls, striking my face with an arctic blast, as if in protest of being restrained and shut out.

“Ahhh,” I sigh as I settle back down into the familiar crevasses and comfort of my chair.
The heat radiating from the ancient stone fireplace chases away one last shiver from this old man-child’s body.

Listening to the crackle of splitting wood, I can’t help but chuckle as it reminds me of an ill-tempered woman on a rainy night, piercing the silence like a stinging whip.

I tip my head back, watching in amusement as shadows of firelight flicker on cracked wooden trusses, as if the shadows have come alive, laughing with exuberance and dancing like an innocent child without concern or fear of the future.

I reach for quill and parchment as I chronicle bygone times, my attention turning to my sleeping comrade. With a soft and gentle voice, I whisper, “We fought well together, didn’t we? Great battles, clanging swords, and mighty warriors. Dream on, my friend.”

Gazing into the blazing fire, I become a bit melancholy, remembering when light became dark and the children of Elyon traded their destiny for a lie. Such somber days those were.

“Mercy, mercy, mercy,” mimics the great griffin warrior. “That’s all I ever hear. You’re like a child looking at her reflection in a mirror, only to walk away, forgetting who you are. You will never be fit to fight in Elyon’s army as long as you remain self-absorbed.”

Grace strains her voice as her lungs thirst for a breath of air under the weight of the griffin’s unrelenting paw.

“Aloysius,” she whispers with a hoarse voice, “what kind of warrior could I ever be with only one leg? I can’t do anything. I’m like a discarded piece of cloth no one has use for.”

Releasing the pressure from around her neck, Aloysius shakes his head in frustration, broken feathers escaping into the wind like seedlings searching for fertile ground. He paces, carving another worn groove within the rocky summit. Abruptly he stops, kicking up dust beneath him as he turns to face Grace. Attempting a gentler tone, he clears his throat, wings tightly encased behind him.

Softening his voice and failing miserably at a smile, he speaks. “Grace.” He pauses. “Young novice.” He pauses again, as if to draw attention to his sad attempt at showing patience. “Your enemy will stop at nothing until he crushes your heart and rips your soul with his teeth. He will laugh as he spits you out and watches you shrink from all you could have been into nothingness.”

Unable to hold his frustration at bay, Aloysius explodes like thunder, enraged and exasperated. “Is that what you want, Grace? Eternal suffering?” Bringing his eyes a mere blink away from hers, he whispers accusingly, “I think you do.”

Tears well up in Grace’s eyes as she throws herself on the ground with flailing arms. “l can’t, I can’t,” she cries.

With a powerful rush of indignation and annoyance fueled by adrenaline, Aloysius soars into the sky, over the mountains, and through the valley—faster and faster until a streaming rainbow of color is all that can be seen.

Grace stands and wipes her tears, awestruck by the magnificent display of power and ferocity in this champion warrior.

With a forceful surge of wind and a rustle of feathers, Aloysius takes his stance once again before his charge. The dust beneath Grace swallows her whole as Aloysius hides his amusement.

Spitting sand out and wiping it from her eyes, Grace tries to focus once again on her mentor. Speaking softly with a hint of sarcasm, she asks, “Can I do anything else to make your day, Aloysius?”

Neria is always a welcome interruption. It is said of this beautiful and most tender of all creations that she carries the tears of broken hearts to the feet of the Creator.

Some say she loves and shows mercy as she herself has been loved and shown mercy.
No one could mistake her gentle voice, but today is different as she speaks with urgency, which is quite unlike her.

“Grace,” she beckons, “come along. We must make haste if we’re to make it back to the castle in time.”

Taking Aloysius into her confidence apart from listening ears, Neria
unfolds the horrific drama that has taken place in the lands of Elyon, their Creator.

Panic and dread fill Aloysius’s heart. He pauses for a moment, foreseeing the ramifications of such malicious vengeance.

Knowing his pain, Neria softens her voice. “Aloysius, I’m afraid there’s more. The Creator has summoned Grace to be used as his voice, placing her at the center from whence this atrocity came.”

“She is far from ready,” Aloysius says, raising his voice. “She is still governed by her emotions, does not concentrate, and wells up with puddles of water deep enough to drown in.”

“Perhaps what the Creator wills requires trust at times,” Neria confesses, glancing at Grace, “even if we don’t always understand. Elyon grows weary at the behavior of His creations. They have imprisoned our good king and lifted themselves up like a shrine. Their pedestal is built with pride, false humility, and self-righteousness.” Neria pauses, her eyes filling with tears. “They are looking to Prince Amoz to guide them.”

“War must be, while we defend our lives against a destroyer who would devour all; but I do not love the bright sword for it’s sharpness, nor the arrow for it’s swiftness, nor the warrior for his glory.
I love only that which they defend.”
—J.R.R. Tolkien

Born of the dust, overwhelmed with emotion and broken; can one girl learn to fight the forces of darkness in her kingdom and within?

Sophia Grace was adopted by an American missionary  and now resides with her mom  and author Laura Handley,  in the midwest.