Windows into the Third Heaven 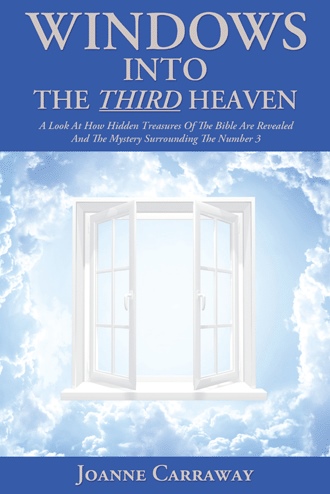 Did you notice that when Jesus said “It is finished,” it also said He gave up the “ghost”? The word scholars translated as “ghost” is the Greek word “pneuma,” which means “breath.” It corresponds to the word used at the very beginning in Genesis when man was created.

“And the LORD God formed man of the dust of the ground, and breathed into his nostrils the breath of life; and man became a living soul.” (Genesis 2:7)

Whatever God’s Manifest Presence or Glory was as It hovered between the cherubim above the Mercy Seat of the Ark of the Covenant, when Jesus exhaled the final time and “gave up the ghost,” it was as if He “exhaled” from the hovering place above the Ark of the Covenant the “Pneuma” or Life-giving Breath of God that had been manifest above that Mercy Seat. I want to say this in all reverence. Can you see what it is like when God leaves a place? He blows out of there. That to which is referred in scriptures as His “breath” is likened to the Holy Ghost. Look at what the resurrected Christ told His disciples just prior to Pentecost:

Days later the 120 would be gathered in an upper room to receive the Promise of the Father, the Baptism with the Holy Ghost. The “pneuma” or Life-giving Breath of the Almighty entered that room by “blowing in.”

“And suddenly there came a sound from heaven as of a rushing mighty wind, and it filled all the house where they were sitting.” (Acts 2:2)

“Being justified freely by his grace through the redemption that is in Christ Jesus: Whom God hath set forth to be a propitiation through faith in his blood, to declare his righteousness for the remission of sins that are past, through the forbearance of God...” (Romans 3:24-25)

Jesus Christ was the Mercy Seat from the foundation of the world. Again, the Mosaic form of worship was instituted by God with definitive patterns and incorporating the sensory level of human existence in order to communicate on a level that fallen mankind could understand. It was the “seen” explaining the “unseen.” The “physical” explaining the “spiritual” and closely interwoven within God’s communication of Christ as the Lamb slain from the foundation of the world was the number three.

Let us also be mindful that the inscription above His cross stated “King of the Jews” in three languages: Hebrew, Greek, and Latin. Yet, when He cried from the cross, there was confusion among the spectators as to what He said:

“And about the ninth hour Jesus cried with a loud voice, saying, Eli, Eli, lama sabachthani? that is to say, My God, my God, why hast thou forsaken me? Some of them that stood there, when they heard that, said, This man calleth for Elias.”(Matthew 27:46-47)

It is not without significance that He used another language in this poignant iteration—a language which, heretofore, He had not spoken in His public ministry. He used a Chaldean dialect, which is why many of the bystanders confused His calling upon God with the name of the Old Testament prophet Elijah. Here, on the cross, He further exemplified that He and He alone was the One to which all covenants had pointed and prophesied. God’s First Covenant of a promised “seed” was with a man named Abram, who later became Abraham. Abraham was the great patriarch and the very special man who hungered to know God in such a way that God became his friend and cut covenant with him. Because of Abraham’s faithfulness, we have all been grafted into the Tree of Life. Abraham was from Ur of the Chaldees. The First Covenant for the child of the Spirit, Isaac, that is, the child of promise, was with a man who spoke Chaldean! Abraham spoke Chaldean that day on Mount Moriah when he lifted his knife in obedience to Jehovah to slay his only son—the most touching and literal depiction of the sacrifice of the Son of God given in the Old Testament. Note the old patriarch’s statement of faith to his only son:

“And Abraham said, My son, God will provide HIMSELF a lamb for a burnt offering: so they went both of them together...” (Genesis 22:8)

As stated in a previous chapter, Abraham did not say: “God will provide a lamb Himself.” This point is so often overlooked. Abraham, speaking prophetically in his native Chaldean language stated that God Himself was coming as a lamb! Yes, The Lamb of God was upon that cross that day at Golgotha—the place where many scholars believe is the original Mount Moriah—and in fulfillment of all that He had faithfully promised throughout the centuries of time, He spoke in the language of the First Covenant and of His friend, Abraham’s Chaldean.

Also, there is prophetic correlation of the third part of the Mosaic tabernacle (temple) to the “third-part” work of Christ through his “free-will” offering of his body—that which veiled from the physical eye the fullness of the Spirit of God within him. Jesus was, indeed, “rent” upon that cross and though the physical suffering was great, it is not that rending to which I allude. His own words declare the indescribable “rending”—a rending that only the sinless, Son of God who had walked as a man in complete communion with His Father—could experience. His exquisite agony of spirit bears repeating:

“And about the ninth hour Jesus cried with a loud voice, saying, Eli, Eli, lama sabachthani? that is to say, My God, my God, why hast thou forsaken me?” (Matthew 27:46)

An examination of the Greek in this text shows us that this was no weak, barely discernible utterance from the cross but, rather, a mighty shout that could be heard for some distance. Little wonder, for the antithetical event of the universe was, indeed, transpiring upon that cross in a way that fallen, mortal minds can never comprehend—for we mortals were born in sin. We've become comfortable with the experience of sin and comfortable having the sin nature abide within us. We cannot know “forsaking” in the way He knew “forsaking,” since we are born alienated from God. Christ, on the other hand, having never been “separated” by sin from His Father, began experiencing the penalty of sin for every human being who had existed or ever would exist. This is incomprehensible to the finite, fallen mind and I believe that only when we enter Heaven and the higher level of existence can we begin to “understand” what He experienced that day. If is irrefutable proof of His Deity, since the “weight” and penalty of sin of innumerable souls could only be endured by the Divine Strength.

He bore it all and such was the conflict that nature “felt” the effect:

“And, behold, the veil of the temple was rent in twain from the top to the bottom; and the earth did quake, and the rocks rent.” (Matthew 27:51)

The Life-Giver, the Embodiment of Eternal Life, received the bitter cup of Death—not for Himself, but for me and for you! It was a paradox of unquantifiable proportions which could have “fractured” the physical universe and all of Eternity. The event of the Creator tasting death literally created a physically observable “disruption” in His creation, for it is Christ Who “upholds all things by the word of His power.”

“In that hour Jesus rejoiced in spirit, and said, I thank thee, O Father, Lord of heaven and earth, that thou hast hid these things from the wise and prudent, and hast revealed them unto babes: even so, Father; for so it seemed good in thy sight.” (Luke 10: 21)

The Bible is a book of hidden treasures purposefully designed so by our God. Many of these hidden treasures are complex, yet they can be understood by ordinary people. Jesus likened this group of people to “babes.” One of the meanings of “babes” in Greek is “simple-minded.”

God desires to open the windows of heaven and reveal the secrets of His Holy Word to you. If you consider yourself inept or too “simple-minded” to understand, then all the better! You are just God’s type, and yes, He’s looking for you. He will reveal to you “even the hidden wisdom, which God ordained before the world unto our glory” (1 Corinthians 2:7). Need more proof? Look at what God promises in Revelation 2:17:

“To him that overcometh will I give to eat of the hidden manna.”

May you begin to eat of this hidden manna as you read Windows into the Third Heaven, and may this book be graciously used by the Spirit of God to whet your appetite for more.

JOANNE CARRAWAY was named Miss Mississippi, International Country Gospel Music Association during her years of Gospel Music Ministry. As the duo Country Praise, she and daughter Bree were awarded the ICGMA Gold Cross Duo of the Year. Joanne was later inducted into the 1997 ICGMA Hall of Fame in Texas. She was honored to teach at the Christian Country Music Association Convention, World Baptist Center, in Nashville and at the Branson, Missouri-based Country Gospel Music Association Convention held in Brinkley, Arkansas. She also provided weekly Bible teaching programs broadcast over local AM and FM radio stations in Mississippi. Windows Into The Third Heaven was written in response to audience members requesting a book relative to these teachings.