At An Hour That You Think Not 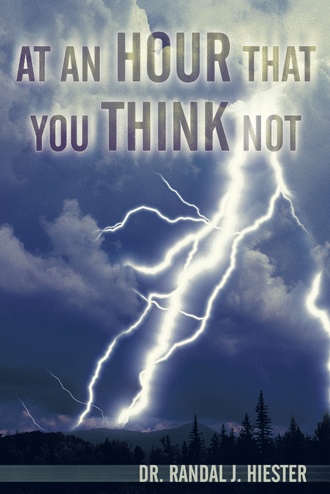 I was fortunate as a teenager to be part of what I would consider to be the finest youth program.  I recall in the eighth grade that the church I attended, Bible Baptist Church of Shiremanstown, Pennsylvania converted the youth program to a formalized program under the umbrella of Word of Life Club, out of Schroon Lake, New York.  The program was first class and was known for and continues to this day to involve and encourage teens to use their God-given talents for the glory of God.  The teens did so by competing with other Word of Life Club participants at area, regional, and national competition sites.  The areas of competition included: singing, instrumental music, creative writing, story telling, Bible quizzing, and preaching.  The latter, as you might assume, is the arena I competed for the next five years.
It was either the spring of 1980 or 1981, after I presented my sermon before the youth group, the well-loved mentor and youth pastor, Pastor Charles Cole, gave an assessment of my initial presentation. This was common as he did this with all participants for all categories of ministry, in order to help us fine-tune our presentation prior to the area competition.  That year he made just one comment.  I am certain he did not realize this comment would linger with me for many years, and bring me to a point of searching deeply into the subject that we are about to delve into.  The comment was this.  “Your message was great.  The only thing I need to caution you about is you used a Second Coming verse to reference the rapture.”  My response was a sincere pointed question, “How can you tell the difference?”
I cannot recall the youth minister’s response to that question, if indeed there was a response.  I do remember thinking; It shouldn’t be that difficult to tell the difference.  The verse I used sounded doctrinally correct and, with my limited knowledge, appeared to fit the context, so how could it be wrong.  No wonder so many people steer away from eschatology (the study of last things).  No marvel that things which are tough to interpret just through superficial reading, are not considered further.  It stuck with me for many years.  I have come to the realization--- through careful study and most importantly the Holy Spirit giving understanding to the truth in the Word of God--- that the reason I was confused as a teenager, is because there is no difference.
This reason gave birth to at least a dozen more concerns that I either had or through study of the Word, would become a question mark to me.  It is possible that the reader may find him/herself asking the same questions.
Not knowing who the reader is, I need to take a moment and define the difference between the rapture and the Second Coming of Christ for those who may be hearing these terms for the first time.  The Second Coming is defined in Scripture as the event where Jesus Christ returns to earth at the end of time in power and great glory to exercise judgment over the anti-Christ who has surrounded Jerusalem, and to bring an end to events of this earth.  He the Lord of Glory will exercise judgment on all mankind and usher in His eternal kingdom after separating His own (called sheep) and those who have rejected Jesus as the Messiah (goats).  The goats are exited into eternal damnation and the sheep into life eternal in heaven.
The heavily taught and touted  rapture theory is the teaching that 7 years prior to the Second Coming of Christ, a secret event where all believers in Christ will be “raptured” away from the earth, unknowingly, unexpectedly, with no sign nor eyewitness to the event.  The teaching is eagerly embraced among many fundamentalists because there is a good feeling to this teaching in that  you are taken away from the seven years of what the Bible calls “Great Tribulation” which will occur during the last seven years on planet earth.

A theological subject debated over and over again without resolution is eschatology. Although the study of last things involves several subjects, the all-important matter is the return of the Lord Jesus Christ as promised. For 180 years, fundamentalist teaching has touted a pre-tribulation rapture of the church. When a careful Berean style inspection of Scripture is utilized, of necessity you must acknowledge “the pre-tribulation teaching holds no water.” The words of Jesus and a close evaluation of the writings of the apostles make clear what many responsible “bearers of truth” have muddied. After reading this book, may you find yourself closer to understanding the truth of Jesus’ words and less inclined to accept without inspection of the Word, those who teach otherwise.

“Dr. Hiester’s rich heritage of faith and scholarship are represented in this work. His book engages some of the most difficult questions of eschatology. This is a refreshing and challenging exposition which will help the reader gain a richer understanding of the truths of Scripture.”

“Dr. Hiester demonstrates how eschatology can be understood by a child of God. Incredibly eye opening and life changing!”

“I think it is possible that your book may be the best and most comprehensive study on the matter presently available.”

Dr. Randal J. Hiester started teaching the Word of God as a seventh grader. He participated in preaching competition on an international and local level via youth group. He has an MMin in pastoral counseling, a ThM, and a ThD. Dr. Randal J. Hiester has communicated the Word of God for three decades, including pastoring the last eight years. This subject is a result of more than three decades of study, and a message for all to read. The focus is what Jesus said rather than what scholars through the years applied to His words.

Dr. Randal J. Hiester is a bi-vocational pastor residing in central Pennsylvania. He is married with three children and is privileged to preach the unsearchable riches of Christ each Lord’s Day.