A Compendium of Opinions About the Jewish State 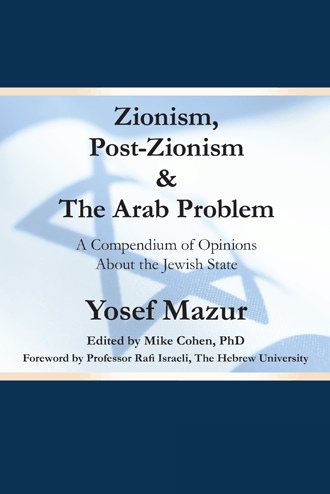 ”History is a myth agreed upon."
Napoleon Bonaparte

"No two historians ever agree on what happened,
and the damn thing is they both think they're telling the truth."
Harry S Truman


To whom does this country belong? Every other question is derived from this.

According to the Arab narrative, this has been an Arab Islamic state since the days of Omar, the caliph who conquered the country in the second quarter of the seventh century. According to Islamic oral tradition, he declared that the country between the Mediterranean Sea and the Jordan River was waqf land, meaning it belonged to Muslims all over the world, and no one else could ever have it. So how could the Jews come in the nineteenth or twentieth centuries and buy land there and establish an independent Jewish state, one that has no legitimacy to exist on Islamic soil? It was just like Spain, Sicily, and parts of the Balkans, which at different stages of history were lands of Islam. According to Islam, land can only go one way, to become Islamic, and it can never go the other way.

The wings of the Muslim Brotherhood believe that the Israeli state or the Jewish state has no right to exist to begin with. This is why Hamas and the Egyptian Muslim Brotherhood cannot even begin to consider recognizing the right of Israel to exist. A temporary peace of ten or twenty years can be given to infidels when Muslims are not powerful enough to conquer their lands, until Allah gives the Muslims the ability to do so.

The Muslim Brotherhood looks at the Jewish state in Israel as if the Jews occupied the country and removed it from the bosom of Islam in which it existed until 1948. When you ask to whom the country belongs, this is the basis of the Islamic perspective.

“Dr. Mazur’s book is a must read! It will serve to uplift the young of our generation and strengthen their confidence and trust in the righteousness of the Zionist way…”
Lt. Gen. (Ret.) Moshe (Bogie) Ya’alon
Vice Prime Minister & Minister of Strategic Affairs

“Belongs in the permanent collection of core books owned by every person who loves Zion and cares about the welfare of the State of Israel…”
Zvi Hauser, Cabinet Secretary, Gov’t of Israel

“Definition of the problem is half the solution. Dr. Mazur’s complete and comprehensive display of the core issues allows the reader to fully understand the Arab-Israeli conflict from the Zionist perspective and understand that world peace will not come from further Israeli concessions…”
Prof. Gabi Avital, former Chief Scientist, Israel Ministry of Education
Chairman, Professors for a Safe Israel

“With immense patience and the precision of a surgeon, Dr. Mazur allows the facts to speak for themselves – which makes a refutation of Israel’s right to exist practically impossible…”
Prof. Dan Meirstein, President, Ariel University Center

“Dr. Mazur’s book is the answer for anyone who wants to know the truth rather than the lies and distortions constantly hurled at the Jewish people and the Zionist enterprise…”
Dr. Yossi Achimeir, Director, Jabotinsky Institute

"Dr. Mazur has revealed the secrets and dangers of post-Zionism and his stunning conclusions will contribute to the life-or-death discourse of our nation."
Prof. Rafi Israeli, The Hebrew University

Yosef Mazur was born in 1919 in Ananiev, Ukraine and has been an active Zionist since age 11. Living in Israel since 1941, he has previously published Jewish Farmers in the Diaspora based on his PhD work at The Hebrew University and Beltsi, Basarabia: A Memorial to a Jewish Community. Yosef & his wife Shifra are great-grandparents many times over and dedicate this book to future generations.