Under the Thelián Sky: Beyond the Great Unknown

by "Frank ""The Christian Noob"" " Olvera 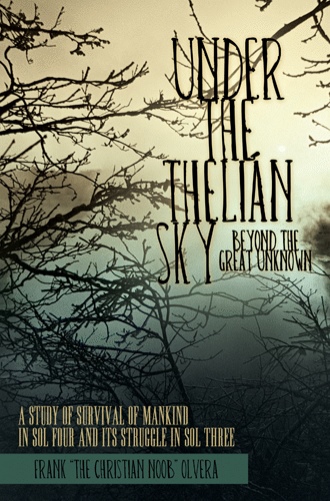 RESEARCH NUMBER 24B49A2E – INTRODUCTION
As a study of our ancestors, the honorable Department of Faith and Science of State University Number 11DE784A had commissioned an extensive investigation to determine the atmospheric deterioration, imminent death of the fourth planet in the system of Sol and how its inhabitants arrived and colonized the third planet of the same system in the year of Our Lord (YOL) 0D7F.0A.19.

Based on the findings that we were able to gather from the ruins of Sol Four several centuries ago, we cannot tell if the Christ ever came to Sol Four, as he did in Sol Three, but we do understand that its inhabitants knew of and believed in God – as noted in what we were able to recover from a copy of His Holy Book of The Good Word, often simply referred to as the Holy Book of God. The copy that we have is dated YOL 028A.0C.19.

“20 God made the heavens and the seas and the land and the animals,
21 which He trusted to man and woman.
22 Yet flawed man and woman were given the right to make own decisions,
23 which corrupted Creation.”
– His Holy Book of Creation 03:20-23, YOL 028A

We understand that it all began in the ancient city of Theliá, but some of the data has been lost. In this report, we intend to explain what we have found and/or deducted from our investigation as accurately as possible considering our limitations given by ancient ruins, books, logs, technologies and other sources that have survived, been recovered and/or reconstructed to the best of our abilities. In doing so, we will support our findings and/or deductions with the proper information.

As an important note, we must remind the timekeeping formats used by mankind in the three different periods this report covers – Sol Four, Soul Three and our present.

In Sol Four, a solar day (sol) is 24 hour and 37 minutes and a year is 686.98 days (1.88 times longer than Sol Three) divided into 24 months – values in comparison to those in Sol Three rounded off to the second decimal.

Sol Three divided dates counting backward from the coming of the Christ (YOL 1B67, “before the Christ”) and also forward after the coming of the Son of Man (“anno domini”) till the end of its history. In Sol Three, a day is 23 hours and 56 minutes and a year is 365.25 days divided into 12 months according to the common era (CE) calendar – the system used by most inhabitants of Sol Three at the time and used as one of the bases for our current time tracking system.

We do realize that, depending where humans have lived, a year has had different values. Nonetheless, from our perspective to avoid any possibility of confusion, we count the number of years lived by mankind in Sol Four (3,455) plus the years before the coming of the Christ (3,561) plus our present time (318). Hence this is YOL 262B indicating the existence of mankind for 9,771 years. Following our tradition, all dates in this report are in hexadecimal in the usual YYYY.MM.DD format preceded by the acronym “YOL” (year of Our Lord). As such, the present date is YOL 262B.06.0D.

Before we proceed, we must point out a major contradiction between science and faith. What we will see later as the Jewish faith indicated that mankind came to existence 3,989 years before the coming of the Christ (YOL 1B67) – as indicated in the previous paragraph. These “years” in Sol Three are not 365-day periods, but rather units of time referred and/or used by God. Each of these “years” may be an era or specific number of 365-day periods at a time. For purposes of this report, we will consider each year as an era with some unknown number of 365-day periods each.

Understanding the latter concept, dinosaurs and other extinct beasts could have existed in one or several “years” consisting of hundreds or thousands of 365-day periods. Hence we can assume that man arrived at Sol Three on a later moment of the same or later “year” making sense of the previous fauna and flora of the planet and its replacement with new species that arrived and were later bred on Sol Three.

Hence, we can affirm that a millennia for us could be a second for God. This is one of the foundations of what we understand as scientific faith. Furthermore we must emphasize that time is relative and calendars are man-made hence subject to error as well as not necessarily linear.

One last fact we need to point out a coincidence or omen from the Jewish tradition. Somehow they foresaw the end of Sol Three on YOL 2342 – 6,000 years after its creation – the exact time frame when mankind was forced to leave Sol Three. This was also regarded as the coming of their messiah.

On a final note regarding timekeeping, we need to emphasize that we do not take the teachings from some faiths into consideration like Oneism, which claimed that mankind came from an unknown planet called Ædîn before arriving at Sol Four as written in their holy book.

“We, children of the world of Ædîn, colonized this world several millennia ago. We do not know or care to understand who or what created us in the first place.”
– Book of One, Core Beliefs: 1, 632 (YOL 0278)

If we did, we would need to add an unknown figure in the thousands of years. As it is, our calendar system might be flawed in this perspective, but we have tried our best to accommodate the history of mankind. We need to emphasize the fact that there have been talks about including a random or specific number to accommodate Oneism, which we do not have any proof of mankind living in the planet of Ædîn or anywhere else before Sol Four, but such figure would be a guess with no scientific base as we have never found the planet of Ædîn as described in the Book of One in the systems of Via Lactea or Great Andromeda or as far as Triangulum.

For more information on Oneism, see the SOCIAL REACTION  and/or OBSERVATIONS: GOD & FAITH SYSTEMS sections of this report.

As everyone knows, God created mankind to his image (Genesis 01:27). What mankind does not know is that God did not create man on Earth, but rather on MARS! When Mars could not sustain life anymore, mankind had to escape the planet and colonized Earth. Many years later, a study was written about the survival of mankind in Sol Four (Mars) and its struggle in Sol Three (Earth). We proved to be a species that has survived wars, slavery and other forms of abuse -- always holding on to our faith in God.

"Overall Rating: 4
out of 5 stars. I will admit when I was first approached with the idea of this book it offset me. I am not religious. However, this book combines religion, science, and human nature and thought into a very lovely collection of stories and tales. I found that I enjoyed hearing about how human kind still holds principals so close to their heart. And it gave me hope for the future."

After struggling for decades with faith and manic depression, Frank Olvera finally decided to work on stories that remained dormant in various notebooks and disks.

He is the author of "Under the Thelián Sky: Beyond the Great Unknown" (WestBow Press, 2012, ISBN 9781449735920). He holds a degree in audio engineering and another in computer science. He has also been involved in other fields such as education and journalism. He has published several websites with information ranging from music to technologies to wrestling to religion, for which he received several awards and recognition from several entities in each of the different fields. He has also received several awards for poetry.

Growing up Catholic, he found many aspects that he did not understand or care for in Catholicism. Hence he strayed for about thirteen years. He finally returned to the Church in the fall of 2008 choosing a Presbyterian church. Nowadays he neither considers myself Catholic anymore nor Presbyterian for that matter – just Christian.