He chose to give birth to us by giving us his true word. And we, out of all creation, became his prized possession. James 1:18 NLT 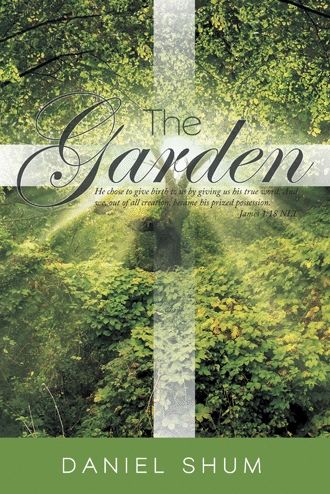 Spaz stopped suddenly, but not because of Adam’s objection. In the shadows of the thick brush at the edge of the forest were two glaring, red eyes that stopped him cold, causing the hair on the back of his neck to bristle. A frightening sound came from deep in the dog’s throat. Spaz had never growled before.
Satan jeered a sinister laugh and released his hold on the serpent as he had no further use for him. The serpent quickly disappeared, and for a moment, no one moved. Finally, Adam shuddered and whispered, “Let’s go,” and the three of them half ran back toward home.
As they neared their spot of sanctuary in the midst of the meadow, Adam looked up at the same bluff he had stood with the Lord and saw the silhouette of the male lion. He looked like a king, surveying a battle taking place below. In times past, Adam had called the lion to come to him so he could pet his mane and his heavily muscled shoulders. But somehow Adam knew he couldn’t do that now—at least the fear he now felt would not allow him to try.
Having reached their dwelling, they sat down. Breathing in heavy desperation, they looked at each other as fear pressed in on their hearts. They looked at the ground in frustration; they looked to the clouds for answers; they scratched at the itchy coverings they were not used to wearing. Finding no answers or any comfort, they simultaneously began to hurl accusations at one another.
“Why did you listen to that snake?”
“Why didn’t you tell me the serpent shouldn’t speak?”
“Why did you even go near the forbidden tree?”
“Why didn’t you stop me before I ate it? I know you saw me take the fruit. And why do you keep looking at me like that?”
Never before had the man and woman raised their voices at each other. Never had they been suspicious or accusatory with one another. They were angry at each other and did not understand what was happening to their world. As the sun dipped below the tree line, casting shadows across the meadow, the couple continued to argue as their sin cast its dark shadows of fear, frustration, and futility across their souls.
As the man and woman continued arguing, they heard a familiar sound. It was the sound of the Lord, coming to visit them. Without another word, they quickly hid in some nearby shrubs. When the Lord walked into the meadow where He was accustomed to finding them, He looked about for them, but the man and woman were nowhere to be found.
“Adam, Adam, where are you?” Such an innocent, simple question. But to the Lord, it was filled with sadness. Though He knew this day would come, it surprised Him how heavy the words felt coming out of His mouth. It had been easier to speak worlds into existence than to choke back the sorrow enough to speak the words without giving away what He already knew. “Adam, where are you?”

If Genesis is the book of origins, then the garden of Eden is the first grain of sand to fall through the hourglass of time. It is a microcosm of God’s intention for mankind. It shows us a passionate and creative God who desires someone like Himself, someone to relate to.

Parents adore their first child and fill scrapbooks and photo albums with “baby's first …” Have you ever considered that Adam was God the Father’s first child? Have you ever meditated on the kind of relationship that God desired to have with mankind or wondered what it means to be created in His likeness and in His image? Have you ever imagined what it would be like to walk and talk with the Lord, face to face, without the sin barrier?

The Garden explores that place, that time, where the most passionate heart in the universe prepared a garden as a habitation and a place of fellowship for His first son and daughter.

Daniel is passionate about studying and teaching the Word of God. Even from his youth in the farmlands of north central Kansas, he began writing daily devotions and teaching the Bible in youth group at the small Baptist church he attended with his family.

A perfect afternoon for Daniel is to be alone on a hillside or by a stream with his Bible, guitar, and notepad.

Daniel Shum resides in Springfield, Missouri, with wife, Alicia, and daughter, Rebekah. He has served as a lay youth pastor for seven years at Fountain of Life Christian Fellowship and has also served as the worship leader for fifteen years.