A Soldier's War with Recovery 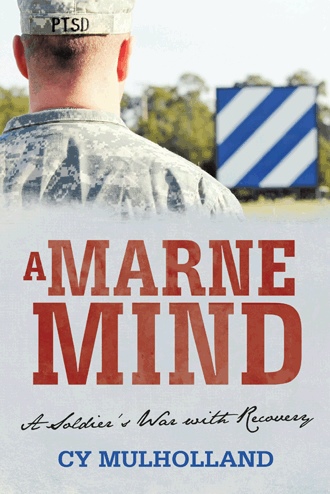 I was a member of the 3rd Infantry Division (Mechanized) for the first ten years of my Army career: also known as the Marne Division. The 3ID earned its nickname in the First World War following the Second Battle of the Marne, which was a major turning point in the conflict. The battle began with the last German offensive and ended with the first allied offensive, which began at the Marne River in France in the year 1918. That is why, to this day, the 3rd Infantry Division Motto is “Rock of the Marne.”

I am glad to have served in the 3rd Infantry Division, and I am very pleased that PTSD (Post Traumatic Stress Disorder) is drawing more and more attention all the time. There is a growing public interest and, because of this, it is becoming more possible and effective for those who are still suffering and those who are in need of skills that will assist them in sustaining and maintaining recovery to receive the help they need.

“A Marne Mind” began as a coping skill for me: a therapeutic means of allowing myself to put my thoughts and emotions down on paper, as I struggled mentally with Post-Traumatic Stress Disorder. Before it was “A Marne Mind” it was only poetry that I began writing while receiving treatment for PTSD, which I had developed early on during my childhood. My PTSD symptoms became more severe as an adult, due to multiple overseas deployments while serving in the United States Army. During my treatment, at about the two and a half year mark, I met a gentleman named Rich: a Vietnam Veteran who introduced me to the idea of writing poetry. Once I began writing, I never looked back.

Initially, I had no aspirations of writing a book, and even after sharing some of my poetry and being told by others that I had talent for writing and that I should consider writing a book, I still never imagined it would be possible. It wasn’t until I had written somewhere around twenty to thirty poems that I thought were decent that I began thinking I might actually be able to put something together and call it a book. The more I wrote, the better I seemed to feel. I discovered that I was making leaps and bounds in my recovery and most of my success was due to my spiritual reconnection and my ability to see how I truly felt about the things that were going on in my mind when they were directly in front of me, on paper, where I could read and process them whenever I wanted. Writing gave me the ability to sift through bad memories and figure out a more positive way to deal with them. I learned that by doing this, I was able to open up and talk about the things I had experienced in a much more positive manner. After making a great deal of progress, I was able to effectively begin my journey back to my roots: my Christian upbringing.

It was then that I realized what kind of book I was actually called to write. “A Marne Mind” is a book of repetition and growth, because it is my experience that the more I see something, the more I will become familiar with it and the more I will act on it. It is my hope that it can do the same thing for someone else struggling with PTSD. Too often, we see too much negativity, whereas this book draws something positive from something negative. The chapter titles coincide with the poetry, and much of my poetry is a reflection of who I was and who I am today because of my success with recovery.  “A Marne Mind” is probably different from what most people typically read; however, in this book are the things that have worked for me and how my mind operates.

There are two sides to every war, and therefore there are two sides to the war that goes on inside the soldier or any other militant or civilian who has experienced a traumatic event. In a different aspect, there are two sides to recovery until eventually victory is achieved by learning and acquiring the skills necessary to be successful in recovery and getting as close to a normal life as possible. Throughout the contents of this book, it will be made clear that the poetry reflects my real thoughts of the things I have experienced from my darkest times, as well as my hopes for the future, while the narratives shine light on the details of my experiences and explain my growth and views on my personal recovery as a Christian. I know the details of this journey will be beneficial to anyone.

As you read through the contents of this book, you will be able to see that, as I grew more successful with recovery, the poetry developed from a dark and worldly view into motivational and influential poetry. These join the narratives to become a combined positive outlook. I hope anyone who reads this book will find something helpful in it for his or her life: something that will help in the journey that is recovery. It sure helped me. I hope and pray the war within will be won for those still fighting.

Many who suffer from post-traumatic stress disorder do not realize what is going inside themselves. Unfortunately, those who return home from combat or who have experienced any other type of traumatic event remain in the battle, the war within. Could it be that PTSD is merely physiological symptoms related to trauma, or is it so much more than that? A Marne Mind explains the advantage of coping skills and the relationship among physical, mental, emotional, and spiritual ruin and well-being while constantly pointing to the greatest source of healing and recovery. Search for A Marne Mind: A Soldier’s War with Recovery on facebook to become a part of the Marne Mind Mission of raising awareness about PTSD and recovery. 5% of all proceeds will be donated to Operation Resilient Warrior, a nonprofit organization dedicated to helping soldiers and their families. For more information about ORW visit www.operationresilientwarrior.org.

Cy Mulholland is an armored crewman (tanker) in the United States Army. He has served for thirteen years and deployed five times, three of which were combat tours. He resides at Fort Knox, Kentucky where his goal is to raise awareness of Post-Traumatic Stress Disorder (PTSD) and recovery.