Biblical Christianity in the Culture of Religions and Secularism 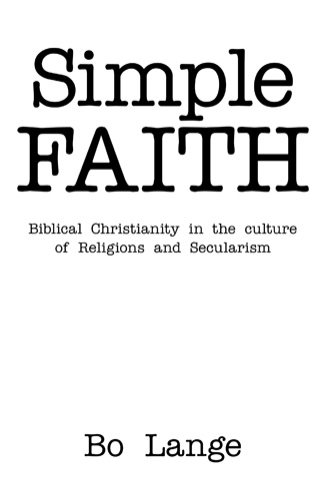 Bo Lange’s Simple Faith offers a look at the Christian Faith as represented solely in the Bible. The author states that his book is not one about Christian religion but about having confidence in the Bible as being God’s word. His concern over how religion and secularism is dominating our culture led him to write this book to reintroduce the Bible to readers. Simple Faith stands apart from other books in that it breaks down all the arguments about Christianity to the most basic yet powerful aspects of the Christian faith. The author reveals God’s love for humanity and how Christ brings salvation to us. Most impressively, he reveals the prophecies that verify that Jesus Christ was the Messiah, and he provides supporting evidence that the Bible is the authentic Word of God, historically and scientifically true in its statements—and it will prove itself true again when its prophecies about the future are fulfilled. Simple Faith, you will rediscover the Christian faith that inspired the early Christians, that changed the world they knew, and still has the power to change the world today.


The book, called "Simple Faith," touches on Biblical Christianity, in the culture of religions and secularism, as noted in the book's subtitle, and stemmed from a book Lange wrote in his native Sweden.

"Simple Faith" offers a look at Christian faith "as represented solely in the Bible," according to an overview of the book on publishing company WestBow Press' website. Lange said "Simple Faith" is essentially about having confidence the Bible is God's word, as he is concerned with secularism and religion dominating our culture, which has led him to reintroduce the Bible to readers.

The book breaks down arguments about Christianity "to the most basic yet powerful aspects of the Christian faith," according to the overview.

"I have the preconceived idea that the Bible really is the word of God, which means you can still trust it," explained Lange, adding, if the Bible truly is God's word and "it is the revealed word of God to man," that makes it no ordinary book. He said the word "simple" helps define the concept behind faith, and also represents his own mind.

"I have a simple mind," said Lange. "Some people, especially those who are more sophisticated, they have a hard time with me, because I'm so simple. So I decided to write the book about simple faith by a simple mind."

By simple, Lange does not mean simple in the way of "easy believism", where if you believe, then you're a Christian, but "simple," as in the concept of faith itself.

"First of all, one of the chapters has to do with 'How does a person reconcile with God', or how is a person, like they usually say, 'saved'?," said Lange. "And I say, it's only by faith. Very simple."

"Coming from a secularist society and humanistic parents, I have gone through all these issues," he explained. "You wonder how in the world did you come up with an idea like that if you grew up in a very liberal, progressive country? And I still believe it, so that's why I decided I'm going to write it and say, 'You can still believe this.'"

The process for getting the book published this time was different from what he did on his first two books in Sweden, he said.

"The two first ones I wrote in Sweden, I went to the printer and said, 'This is what I want you to print,'" said Lange. "So this time I did a lot of web searching, and I found this WestBow Press, which I had heard a little bit about before. And they do all the publishing."

WestBow is a Christian book company, with all books published having Christian messages, said Lange. Though he had a friend from Marquette edit the book, he said WestBow has cut out a lot of the work he had to do from the first two times he was published.

"The second book in Sweden I printed 1,000 copies and I had to distribute them and it was so hard, so they (WestBow) do the distribution on Amazon.com and Barnes and Noble, and it's an eBook." He said the company will print the book according to needs, and keeps 50 percent of proceeds from each book, which costs $9.95.

Lange will be requesting 100 copies from the company, and the book will be sold locally at Canterbury Bookstore, he said. There will also be a book signing coming up at Stones Cafe when copies of the books arrive in approximately two to three weeks.

Lange comes from an Evangelical Covenant Church background and said he has been a confessing Christian since his childhood. He also has served 38 years as a pastor, serving both denomination and non-denomination congregations.

Currently he resides in Escanaba with his wife, Diana, and has recorded Scandinavian music on both cassettes and CDs. He has also helped organize area Scandinavian festivals, teaches Swedish classes at the University of Wisconsin in Marinette, and also teaches Swedish online.

For more information on "Simple Faith," search for the it online at westbowpress.com.

Bo Lange, a native of Sweden, became a Christian in his early teens. By accident, he ended up at Florida Bible College in Florida. After studies there, he married his wife, Diana, and they both went back to Sweden to serve God for thirteen years.

While in Sweden, among other things, Bo planted a church. He then went through seminary training to be ordained into the Evangelical Covenant Church of Sweden. Later, Bo and his wife went back to the United States where he was pastor at the Evangelical Covenant Church of America. He also studied at seminary to become a full member of the United Methodist Church of America. Altogether, he has served in various churches in Sweden and the United States for over thirty-eight years, as well as serving several evangelical congregations in the areas where he has lived.

During the last twenty-five years, Bo and his wife have lived in the Upper Peninsula of Michigan. Their home is in Escanaba at the very northwest point of Lake Michigan. Bo has made numerous Scandinavian musical recordings and is an avid painter. He is often asked to organize the local Scandinavian ethnic festival. He has also conducted several international tours.

Bo is a charismatic preacher and Bible teacher who is in love with his Savior and Lord, Jesus Christ. Through his book, Simple Faith, he desires to make the Lord known to a wider audience.