Beyond the Shades of Gray

Because Homosexuality is a Symptom, not a Solution 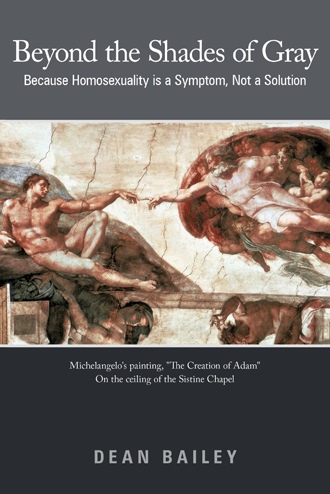 Many years back, I remember opening a newspaper to glance at the political cartoon. The cartoonist had drawn his own rendition of Michelangelo's painting, "The Creation of Adam," which is pictured on the front cover. In the cartoon version, however, the cartoonist included a caption with God speaking to Adam, that read, "Sorry son, you're gay."

The message being sent by the cartoonist that day was somehow a familiar one to me, long before I had ever heard any real discussions about the subject of homosexuality. But homosexuality is certainly not an issue that will ever be solved via cartoons and politics.

Homosexuals want desperately to believe that they are "normal," and to be accepted by their society. And what person wouldn't want that? But the tragic fact is that homosexuality isn't normal. And yet it is something that a small group of normal, everyday people have been forced to deal with inside of themselves. Their choices have been that they can either accept it, or try to suppress and ignore it. Yet neither of these is a completely viable option to so many who've had to deal with it, and never wanted to. So, what if there was another option open to them; one that offers them the very real hope of change?

Over the years since that cartoon was published in my local newspaper, I think I have probably heard just about every discussion and debate over the issue of homosexuality that can be conceived. And in all of the fallout over the choosing of sides that has occurred, I am certain of this: Our society still doesn't understand it. But perhaps even more tragic is the fact that most of the homosexuals themselves really only pretend to understand it. Because they do so out of their own ill-conceived notions, and within the strong emotions felt amid this controversy they've found themselves entangled in. And so the debates will rage on.

This current state of confusion leaves neither those who oppose homosexuality for the sake of opposing it, nor the homosexuals themselves, in a position that qualifies either group to shape our societal views on the issue. And yet these are the people shaping it! There is, however, another view that both camps attempt to silence and/or discredit, for reasons of their own. The first group (those who support open homosexuality) does so, because of the very spiritual aspects and moral accountability that is involved, due to the fact that those views stand firmly opposed to their message and cause. And the second group (those who ignorantly attack homosexuality) does so, because of the moral accountability that those same views demand of their own flawed reasoning and hatefulness. But it is this very matter of fact approach toward the subject of homosexuality that you will be exposed to throughout this book.

In the chapters that follow, I am going to present some very pertinent information about this complicated and very emotional issue. My scope of expertise to do so is built around this simple fact: I use to be homosexual, but I am not homosexual any more. In fact, I am living quite happily as a heterosexual person today.

"Now wait a minute," you might say. "A homosexual can't change their sexual orientation! At least that's what I've always heard people say about it… Can a person's sexual orientation really change?" Yes, it can! In fact, I'm living proof that it can. But I should also clarify something that is very important to understand here, as I speak about "change" throughout this book: "Restoration," I believe, is a much more accurate term and description of the transformation I am speaking of here, than the word, "change," actually is. Because I found that something vital was restored back to me during this journey and  process, rather than some manipulation of my sexual orientation taking place, in order to bring about a “change” in my sexuality. So, continue reading, and I'll share with you exactly how I got from "there" to "here."

You've probably heard the familiar saying, "perception is reality?" I hadn't given much consideration to it before sorting through all of this. But give that cliché some thought, and you'll find it to be very true of the way people tend to form their ideas, opinions, and world views. One's own perception is indeed that person's own sense of “reality”, even if that perception is false. And the world's perception of homosexuality right now, especially in America, has hidden the tragic reality of it by turning homosexuality into some sort of fairytale, "civil rights" plight, where the homosexuals are supposed to live happily ever after at the end of the story! But the sad truth of this tale is that it will never happen that way. Because the end of their story is based upon flawed information and lies! Still, they'll keep right on believing in their fairytale ending anyway. Because, until a disillusioned person faces and accepts the truth, their false perception will continue to be a dominant force within their reasoning. People are all the same in this regard.

With homosexuality, a person who desires freedom from such behaviors must determine to look beyond their own perceptions, and realize that sexual intimacy with someone else of the same gender is not the legitimate answer to any of their distorted inward feelings and desires, which often do long for a more fulfilling intimacy, and a closer connection with people of their same gender. Such a person must instead begin to discover and address the real reasons why it is that they began to feel so disconnected and alone, in trying to relate to other people of the same gender, in the first place.

This self-evaluation process becomes the place of "ground zero" for the person who desires to be free from homosexual behaviors. And from there begins the often difficult process of learning how to satisfy those unfulfilled places of our soul, in more legitimate and non-sexual ways. Because any kind of sex, when it is used in this manner, is really only serving as a pleasure-substitute for what we've actually sensed was missing. So, homosexual behavior will only cover up the inward pain of the actual voids for a brief moment in time. It can never truly fill them up or heal them.

Such misconceptions are not only prevalent with regard to homosexuality itself, but they are also commonplace in the many pre-conceived notions that lead so many people in today's "Brave New World" to reject a biblical approach toward homosexuality, as nothing more than a worthless, religious bias. And they'll do so while having little to no first-hand knowledge of the Bible and Christianity for themselves. Instead, as is typically the case with homosexuality, they base their knowledge entirely upon what other people have told them, rather than thoroughly investigating each matter for their selves. But this type of attitude is presumption feeding pure ignorance, plain and simple! Our perception does not always equate to truth! And so we must move beyond mere presumption if we ever hope to grow up spiritually.

Over 10 years in the personal journey of its writing, the author uses practical applications of Bible scripture throughout the book, without religiosity. Scripture is used to confront various aspects of this very controversial subject—head-on. Therefore, the author makes no apologies for the portions of this book that may seem to be more graphic in nature than your average “Christian” book. Homosexuality is a subject that absolutely needs to be dealt with truthfully, and without religious avoidance of difficult topics.

If you are a person who has ever had doubts or questions about your sexual orientation or behavior, then what the author has written here is for you. The work contains a wealth of practical, biblical principles, and also includes information for women. But the book is otherwise a work written by a man, for other men who also desire freedom and heterosexual restoration from their own unwanted homosexual behaviors. "What we long for is a deep and heartfelt sense of brotherhood," and the author proposes that the real issues behind homosexual behaviors are not about sex!

God’s love (agápē love) always has both a balance of truth, and a responsibility that goes along with it. In this book, I take the same agápē love approach toward homosexuality, as Jesus did in the Book of John, Chapter 8, with the woman caught in the sin of adultery. Jesus showed great love and compassion toward the woman, both in the way that he dealt with the hypocritical crowd that had brought her to him, and in the way he spoke to her as he sent her on her way, and told her, “Go, and sin no more.”
- Dean Bailey

Dean Bailey was born and raised in the east San Francisco Bay area, and remained a resident of California until he graduated high school at the age of eighteen, and began his military career in the armed services, where he traveled to many different places across the United States, and around the world, including: Germany, Belgium, France, the Sinai of Egypt, Israel, South Korea, as well as combat tours to Saudi Arabia, Kuwait, and Iraq. Dean continues his close ties with the U.S. Military, and he remains a strong and outspoken advocate of the truth concerning homosexual behaviors, speaking out against the Obama Administration's aberrant and forced repeal of the Department of Defense "Don't Ask Don't Tell" policy.

Dean met his wife while attending their local church in Texas, and she has been a constant source of support, encouragement, and inspiration to the author in his life journey, ever since.

If you would like Dean to speak at your church or event, please send your inquiries to dean@beyondtheshadesofgray.org

Dean is a member in good standing of the American Association of Christian Counselors.