Exposing the Betrayal of the Christian Faith in Church and Government

by Curtis A. Chamberlain 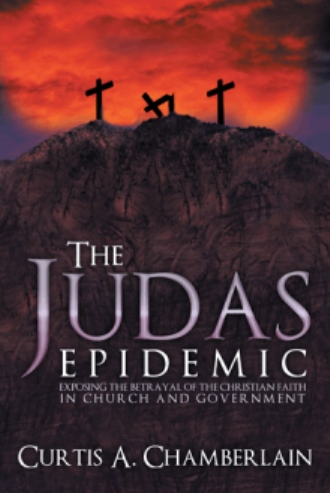 "There has been, down through the ages, a very real and "purposeful" conspiracy to thwart the plans of God. This conspiracy started in the Garden of Eden, when the Serpent (Satan) tempted Eve to question what God had commanded, by asking her, "Yea, hath God said, ye shall not eat of every tree in the garden?" This was Satan's very first attempt to thwart, or circumvent, the plans of God. It was this attempt that resulted in Man's fall from the grace of God, and ended in the whole of Creation being cursed. What a punishment! To be separated from God because of sin!

Satan's first attempt, however, was not his last---no, Satan has been hard at work since the Garden, trying to convince mankind that we, too, can be as gods---that is, that we can know better than God what is good for us. Satan has had great success through mankind's history with his subversive techniques of deception---appealing to our baser instincts of pride and self-worth, in order to convince us that our Creator didn't really mean what He said---doesn't really know what's best for us---doesn't really have our best interests in mind. Satan's deceptions have only resulted in man glorifying and deifying himself---placing himself above his own Creator as the master of his own destiny. This is a sin of PRIDE; which,by the way, resulted in Satan's own fall from heaven!!! What better way to cause the demise of mankind, than to employ the very means of his own downfall?!?!?

Have you ever wondered why today’s “postmodern church” seems to look so different than the church of years gone by? Have you ever wondered what has happened to that “old-time religion” that was good enough for your parents and grandparents, but doesn’t seem to be good enough for people of today? The Judas Epidemic will answer those questions for you. It seeks to explain why the church and world governments are running down the “wide path of destruction” mentioned in John 7:14; who it is that is leading the way down that path; and why you should beware of their deceptive doctrines.

“I have read Curt Chamberlain’s new book, The Judas Epidemic, with great enthusiasm. The contents are helpful, informative, and interesting. To my knowledge, concerning books, The Judas Epidemic is unique in that it defends the Word of God and the Lord’s people by exposing the satanic emergent church and the contemporary movement sweeping across America today.”

A born-again Christian for forty years, Curtis Chamberlain has been led by the Holy Spirit to begin a writing career at age fifty. His written works will focus on Christian apologetics and discernment. He and his wife, Linda, are avid Harley riders and enjoy evangelizing the biker community.