The Flute, the Feather, and the Drum 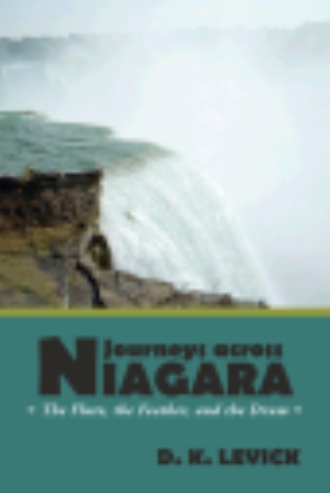 The river began necking down, like a large funnel lying on its side. The closer the shores got to one another the faster the current became, rushing into the funnel. A change occurred, not only to the river’s width, but also to its depth as the bottom rose up. The result was one of utter chaos, as all the surging energy of the racing river attempted to occupy the same space at the same time. The river turned into a white, foaming monster spewing its vengeance into the air with fury and abandonment, crashing down on the boulders and icebergs. The sight stopped us dead. It was exciting and beautiful to see, from a distance. Up close, it was the most terrifying thing I’d ever seen in my life.

A faded picture sets in motion a perilous journey for five young men, who not only encounter harrowing adventure in the forbidden Niagara Gorge, but are forced to confront the swirling illusions of the world and the God they knew—changing their lives forever.

Journeys across Niagara brings together a series of historical events, in a twist of mystery and revelation, with a group of 1962 teenagers caught up in a changing world around them.

The ice-bridge of Niagara Falls—steeped in history, fraught with tragedy—lures them from a world they know into the mysterious Niagara Gorge. As in a time machine, they enter an exhilarating world of massive ice sculptors, impassable rapids, and unassailable walls of ice. Coming face-to-face with the mighty falls, they emerge in a struggle of life and death with a Niagara they never knew existed.

Peeling back time, you will meet the hermit living on the falls, achieving his quest to become one with it. Experience the day the falls stopped, exploring a riverbed never before exposed—until the water returns in a frenzy. Witness slavery through the eyes of a runaway girl riding the Underground Railroad. Cultures clash when the path of a young soldier converges with a young Iroquois brave at Devil’s Hole massacre.

More than a simple tale of camaraderie and adventure, this is a fascinating tale rich in both historical fact and stories of visitors journeying through Niagara into the tapestry of Kevin and his friends search to find what God really is in their lives. Journeys across America is a kaleidoscope journey of adventure and history exploring the questions confronting people of all ages.

Raised as a ‘river-rat’ on the Upper Niagara River, I grew up, not in awe, but in fear of the mighty Cataracts, viewing them as a threat to my Upper river escapades. More than once, I found myself and my fellow ‘rats’ barely escaping the swift current while tubing down the river or fishing off of Navy Island in a rubber raft. Niagara Falls was not to be marveled at or held in great esteem but was held in great fear – to be avoided at all costs.
That changed the first time I went into the gorge and “discovered” a new river. There, I was in wonder of the great canyon and consumed by the mystery of it. I saw there were two rivers, the “Upper” and the “Lower” Niagara; as different as night from day. One an open spigot, empting out the ‘Great Lakes’ in a roar and thunder, the other a life-force, craving across the earth, leaving a trail of beauty and attitude. Much has been written about Niagara, most about the mighty cataracts; little about the Gorge. Truly amazing, when one considers the extensive and exciting history that engulfs the lower river. My heart remains in the gorge, watching—listening to the "water".
I spent some time in the military, serving in Southeast Asia and then earned my college degrees from New York State University while raising a family in Western New York. Spending over 40 years in Environmental remediation, starting with the infamous 'Love Canal' in Niagara Falls, I currently reside in Michigan.
Always enjoying a good read and with a love for writing, this story is for you and to honor our Lord’s promise to protect those who put their trust in Him.as David stated in Psalms 23. It is my fervent wish that you found something of value in it. I would like very much to hear from you.
I give this story to you and hope you enjoy reading it as much as I did in writing it.
Connect with DK LeVick On-Line:
Wordpress: http://dklevick.wordpress.com/
Twitter: http://twitter.com/#!/dk_levick
Email: duanelevick2011@gmail.com
Face book: http://www.facebook.com/pages/Bridges-DK-Levick/157243617667780