The Rambles of a Wandering Priest 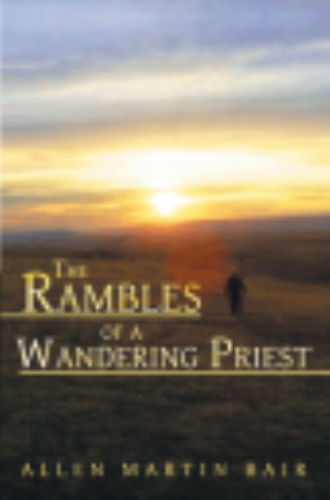 I just went for a walk today. I live near Disneyland and the Anaheim Resort. The walk from my apartment following the major streets constitutes probably at least a square mile. My neighborhood is separated from the resort area by the I-5 freeway which divides the two halves of the square down the diagonal.

In order to reach the resort area from my neighborhood you have to walk all the way around the freeway. There are no paths or shortcuts across or under it. The freeway exits for the resort area lead straight into it, with "no right turn" and "no left turn" signs posted right as the exit meets Anaheim Blvd. What's odd about this is that the exit terminates at a traffic light, and a right turn or left would be no more dangerous there than at any other traffic light. The entrances to the freeway from the resort are also just as singular in purpose. They lead straight out of the resort and do not permit any side trips into the surrounding city and neighborhoods.

As you walk along Harbor next to the Disneyland resort's main vehicle entrance you are surrounded by immaculate hotels suited to nearly every budget, restaurants and eateries ranging from McDonald's to Denny's, the Jolly Roger to Bubba Gump Shrimp Co. All of these places are staffed by very friendly, even perky, young adults and teenagers. There are people who are obvious tourists everywhere. The atmosphere is friendly, inviting, upbeat, and in constant motion. All of it is watched over by both armed and unarmed security who stay mostly out of sight, and work tirelessly to blend in with the rest of the background, until a problem arises which calls for their intervention. And there is also the Anaheim police officers who make regular patrols on foot, bicycle, and patrol car through the parks and resorts.

As I walked through it all and somewhat blended in, several thoughts occurred to me. Most of the people who come here will only come here once in their lives. They will have saved up thousands of dollars to come here, spend a few nights in a hotel, and escape into the carefully orchestrated and sanitized world which this half of the square mile presents away from their "real" world wherever "back home" may be. They don't want to remember their bills, their employers, their schools, their real lives. They want to leave them, if only for a few days out of their entire lives, and be able to forget that they exist by immersing themselves in the family friendly illusions and dreams which the Resort Area offers.

On the other side of the freeway is my neighborhood. We live there because the rent is inexpensive... for Orange County at least. It is a predominantly Spanish speaking neighborhood. On one major street corner is a supermarket in which it is almost a requirement to know a little Spanish to purchase anything. The produce is fresh, ripe, and cheap. There's a real butcher, a real bakery, a small "Deli" of sorts which sells tacos, burritos, rotisserie chicken, menudo, chorizo, and other dishes of which it would be redundant to say they are authentically Mexican. I don't think those preparing them would know how to prepare anything else, and you're on your own if you can't say at least part of your order in Spanish. Nearby is a book and music store which proudly proclaims "musica, libros, peliculas" with no English translations anywhere on the signage. There are also a few fast food places as well.

My apartment complex is one of several along my street in various stages of disrepair. As you walk down the street on a Saturday, it is common to see people holding yard sales and trading their old things for someone else's old things. I'm not sure if any of it actually ever leaves this neighborhood after being sold. Young Hispanic mothers play with their babies and watch their young children play. Older kids chase each other around. Boys strike up impromptu games of soccer in their yards, or in the school playground which is behind my complex. At night, they play street hockey in the school's parking lot.

As I have come home from work late at night, I have often found several of the men who live next to and near us surrounding an old barely working television in the mailbox area, watching a soccer game or a boxing game and being just as raucous and celebratory about it as if they were actually there. At other times, they just stand or sit with each other, drinking a few beers, swapping stories, insults, dreams, hopes, fears. One of my neighbors washes cars and fixes bicycles out of his garage. As far as I can tell, they work when they can get work, and share in each other's lives when they can't.

There are police who watch this area as well. They watch it like hawks, waiting for the kill. I see them patrol it several times a day, and supposedly with good reason. I have on more than one occasion caught the distinctive odor of marijuana wafting through my windows, or around the stairwell. I have see strangers simply sitting on the bench out front as if they were waiting for someone. A few times, strangers have come to my door with the shakes looking to acquire what I think was cocaine judging by the colorful names they were giving what they wanted. I have also often come home to find police units parked in the middle of the street. The officers were out with guns drawn on teenagers lying on the ground with hands on their heads. The man whose daughter we were babysitting for a time stopped coming when an undercover officer drew his gun on him as he was getting out of his car. His pregnant girlfriend who was in the car lost their child from the shock.

Illusions and realities. As human beings we fight, scrimp, strive, and spend everything we have saved to achieve the illusion and hold on to it, even if only for a few brief moments of our lives. We guard that illusion and even that hope of illusion jealously, and like the security in the background, when it becomes in danger of being invaded by reality, we strike back with ferocity to force reality back into submission. But in the end, the illusion must fade when the money runs out. That's what illusions do. And when the money or resources run out, it doesn't just fade, it throws you out as though an unwelcome vagrant, without kindness, without pity, without remorse, and without compassion; all in the name of maintaining it's image. And we are left again with the shock of reality as it is, all the more painful because of the lost sweetness which we have so freshly tasted.

Reality isn't sweet. It isn't well manicured. It's life lived in the here and now with all that goes with it. Reality demands that you look at the present, and doesn't have time for illusion. Reality lives, loves, laughs, cries, shouts, gets angry, bleeds, and dies; sometimes all in the same instant. It demands your full attention and makes you pay for it. It sets the consequences of your actions in front of you and demands that you deal with them in the here and now, and will not be put off until tomorrow. Reality is the hardworking older man who lives by washing cars out of his garage. Reality is the group of kids who can't afford any more than just enjoying being with each other and playing soccer together. Reality is a boxing match shared on an old T.V. with gusto and joy, or a game of pool played on a table rescued from a dumpster. Reality is the kid who can't find love or acceptance at home and so joins with others like himself to compose a new code of friendship, honor, and loyalty, even if it means doing so at the expense of other's peace and security. Reality is the young mother who hides her bruises as well as she can, and hopes her husband doesn't come home drunk again.

This is a book about the path of Jesus Christ and one man's observations while trying to walk it. It is not for the faint of heart, or of faith. It is written to Christians, primarily about Christians and the Church in general. At times, it is brutally honest. It challenges modern "Christian" teachings with the faith of those Christians who came before us. It speaks with the voice of the ancient Church within the language of psychology and today's pop culture. It shouts for a return to the core principles of what Jesus taught. It cries out that the first person who needs to be discipled is one's own self.

Allen Bair began as a non-denominational Bible Christian, seeking to enter ministry as an overseas missionary. After a twelve-year journey through different mission boards, schools, jobs, churches, and denominations, he was ordained as a priest in the old Catholic church in 2005. Born in 1975, he grew up in Orange County, California, with undiagnosed Asperger's Syndrome, a form of autism.. He has served as a pastoral associate at a parish in Huntington Beach, California, and briefly as a co-pastor at a parish in Clarksville, Tennessee. He has been married even longer to a wonderful woman, and they now live in Northern Idaho with their three children. Currently without a parish, he sees himself as a "search and rescue pastor" ministering to all those hurting and broken, whom the Lord brings his way, and he has made a commitment to refuse to turn any aside.