Seeing The Blessings Through The Pain 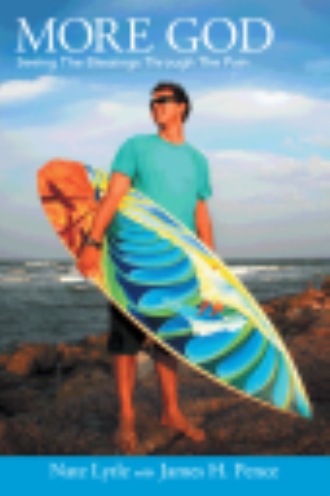 For Billy, the accident happened so quickly, it was as if Nate had simply vanished. One second, he was on the ladder only a few feet away, and the next he was gone. Billy looked over the edge of the shelf and saw Nate lying on the floor cradling his hand. He quickly clambered down the ladder and went to his son. “Are you all right?” Nate lay there groaning, “Oh Dad. My hand. My hand.” Nate’s left hand and wrist were a sickening sight. If it weren’t for the skin and muscle still holding Nate’s hand onto his arm, the hand could simply have dropped off. It hung there grotesquely. Billy knew they needed to get to the hospital immediately. “Don’t move. Hang in there,” he told his son. “I’ll go get the truck and take you to the hospital.” On his way, Billy pulled out his cell phone and called his wife Tammy. “Nate fell and hurt his wrist,” Billy said. “I’m taking him to the hospital.” Billy jumped into his pickup truck and drove back to the warehouse. He helped Nate walk out to the cab of the truck and lie down in the back seat. Then he got in front and drove as fast as he could to the emergency room. As Billy drove, he noticed something very strange and disturbing. As Nate tried to talk, a mixture of gibberish and Coast Guard commands came out. Billy drove faster. * * * Tammy Lytle was on her way to work when she got her husband’s call. She drove straight to the hospital and was walking toward the emergency room when she met Billy, on his way out to park the truck. “Where’s Nate?” she asked. “He’s inside, sitting in a wheelchair, waiting to be signed in,” replied Billy. Tammy went into the ER waiting room. When she saw Nate’s hand dangling from his wrist, it was all she could do not to look away. “Mom, my hand.” Nate said, trying to lift his hand. “It’s okay Nate,” said Tammy. “Just be calm and wait for the sign-in nurse to come to the window.” Like most hospitals, this one had a registration procedure for walk-in emergency patients. If you don’t come in by ambulance, it can be a long wait. As Tammy and Nate waited for the sign-in nurse, Nate tried to say something, but it came out as gibberish. “What did you say?” Tammy asked Nate. Nate tried to speak, but only meaningless syllables came out. Seconds later his head began to loll to one side and his body began to go limp. Concerned that Nate might slip out of the wheelchair, Tammy called out to a nearby security guard, “Can you please come help me hold him in the chair?” The security guard came over to help, but quickly realized that Nate was in trouble. “Let’s get him to the back,” he said. As they rolled down the hall they met Dr. John McNeill, the ER doctor who was on-call that day. “What are you doing back here?” he asked. “My son fell and hurt his wrist,” Tammy replied. “But he started talking weird.” “What do you mean he’s talking weird?” Dr. McNeill said. “I don’t know,” Tammy said. “He’s trying to talk, but it’s just gibberish.” A look of concern came over Dr. McNeill’s face. He knew that if Nate was talking funny, his injury could be far more serious than a broken wrist. “Let’s get him back to the trauma room,” Dr. McNeill said. Billy caught up with them as they wheeled Nate back into the trauma room. As Tammy and Billy watched the trauma team get Nate onto the bed, Nate kept apologizing for all the trouble he was putting everyone through. Then he began talking in gibberish again. When the trauma team began to ask Nate his name, he began to call out his name and Coast Guard ranks. * * * As Tammy and Billy sat outside Trauma One, Billy recounted for Tammy the story of their rush to the hospital. Suddenly, the door to Trauma One opened and Dr. McNeill came out. Something about the expression on his face told Tammy and Billy that the news was not going to be good. “We think your son has a severe head injury,” Dr. McNeill said. Tammy and Billy were puzzled. “What?” asked Tammy. “We lost him. We lost vitals. We lost everything. He’s been intubated and sedated, and he’s on life support.” Tammy couldn’t believe what she was hearing. “No, he just hurt his hand,” she kept repeating. “When we got his cap off,” said Dr. McNeill, “there was a soft spot on the left side of his head. If there’s been head trauma, it’s very serious and he will require surgery, but we need to do a CAT scan first. We’re waiting on a room to become available now.” Dr. McNeill paused and said, “You need to come in and talk to your son.” “Will he understand us?” Tammy asked. “Well…” Dr McNeill hesitated. “Why do we need to talk to him?” “You need to talk to your son,” the doctor repeated. “We’re waiting on a CAT scan, but we don’t know…” Dr. McNeill’s voice trailed off and he looked down toward the floor. A horrible realization swept over Tammy and Billy. “You don’t think he’s going to make it through the CAT scan. Is that what you’re telling me?” “Mrs. Lytle, you need to come talk to your son.” Tammy and Billy Lytle followed Dr. McNeill through the door into trauma room one. They learned later that, without surgery, Nate would have had less than fifteen minutes left to live.

On June 3rd, 2007, right after competing in his first surfing contest, Nate Lytle sensed that surfing may have become a distraction in hearing from God. As he drove home that night, Nate made a commitment to God that he wouldn't surf for a whole year.

The next day Nate fell from the top of a ten foot ladder, shattering his skull and leaving him with a severe brain injury. Nate was not expected to live, and even if he did survive, the doctors said he would never walk, talk, or communicate again. As word spread about Nate’s condition, his surfing buddies urged one another on with the phrase "Pray for Nate."

More God tells the compelling story of how God brought back Nate from the brink of death and put him in the very unique position of speaking truth into the lives of those who cannot speak for themselves.

Nathan (Nate) Lytle lives in Corpus Christi, Texas with his wife Brianna. After thirteen years of ministry with youth and four years military experience, Nate had an opportunity to move to Tallahassee, Florida and serve as a young adults’ pastor. But God had bigger plans for Nate. After Nate's injury, God took him in a new direction. Now he speaks to those who are enduring struggles, sharing that God brings blessings through pain. You can learn more about Nate at his Web site: natelytle.com.

James H. Pence is a performance chalk artist, singer, speaker, published author, and ghostwriter. Jim has been called a “Renaissance man,” but he prefers to be known simply as a follower of Jesus Christ and a storyteller. Jim is the author or co-author of nine books, including the recently-released The Encounter, a collaboration with bestselling author Stephen Arterburn. http://jamespence.com.