A Study In The Book Of Revelation 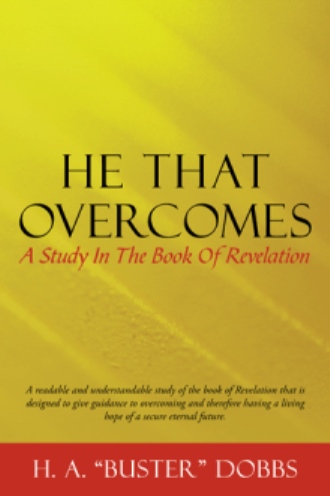 This book explains who we are and where we are going; it tells us in glowing terms what the future holds for the men and women of faith.

The book of Revelation records an immense struggle between good and evil, truth and error, God and Satan. Throughout Revelation and this study there is the great concept of spiritual warfare, with its demands for courage and faithfulness, and with its promise of great reward to those who overcome. The gist of the book is revelation, persecution, victory.

H. A. Dobbs, affectionately known among his many friends as Buster, was born in 1926 in the Panhandle of Texas, but grew up and received his schooling in Houston. He has lived there most of his life -- married Martha Jean DeWoody there, and they raised their family there, three children, eight grandchildren, and fourteen great-grandchildren.

H. A. Dobbs has preached the word of God more than 50 years. He spent 17 years with the Memorial Church of Christ in Houston, bringing it from a small group to becoming one of the largest and strongest churches in that fellowship. His incisive thinking, his courageous proclamation of the truth of God's word, and his ability to teach and encourage Christians has resulted in revival meetings and lectureship participation in most of the states of our nation. He has been a guest speaker at many of the colleges and universities associated with churches of Christ. He has preached in the Far East and Russia.

Dobbs has served as Editor-in-Chief of the Firm Foundation for 23 years, writing many editorials and articles of important religious significance. He has contributed material to more than 20 books.

H. A. Dobbs has made a special study of the book of Revelation over a span of two dozen years. His insights are important. His call to stand steadfast in the awesome battle between good and evil is relevant in this secular age. He is, himself, committed to "fight the good fight of the faith."