The Chronicle of Christ 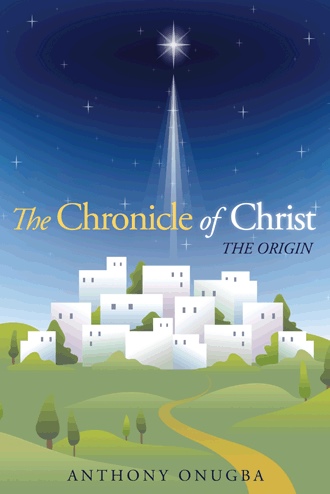 Chapter one Zachariah It was a very cold and windy morning in the hill country of Judea. A man walked hastily towards the temple with a walking stick as his companion. The stars ruled over the sky at that time as the sun had not risen yet and the moon had gone into hiding. The presence of the stars, blinking at almost every second, made the sky a beautiful sight to behold. Gazing at them, one would hardly realize that the moon was not present as their presence in such great multitude had a soothing effect on the eyes and gave calm to the mind. Only those who cared to look really saw the magnificence of the sky which was painted with stars but for this man, he fell into the category of those who didn’t care to look at the sky because that was the least of his worries at that time. Even so, the stars were not bothered as they continued their performance waiting to flee at the rising of the sun. The man made his way through the darkness without a torch towards a destination which was familiar to him. He was going to the temple. He had served at this same temple for many years now and knew his way there even with his eyes closed. This was why he didn’t bother taking a torch. After all, unlike the moon, the road is always on hand to be trampled on. As he approached the temple, he stopped for a brief while and took his time with the support of his stick to climb up the stairs. The stick had been his companion for some years now but even though the stick was strong enough to carry his weight, he treated it with care as the stick was actually older than he was. It had been passed on from one generation to another until it got to him with the hope that he would pass it on to his son who would keep it until his grey days and then begin to use it when his legs became weak just like his father and others had done before him. The only problem was that he had no son to pass on the stick to. In fact, he had no child of his own. He had tried so hard and often offered sacrifices to God and has also embarked on fasting and several prayers but to no avail. This was one of the things that ran through his mind. In fact, this was the one that had built a house in his mind in the last two decades. This was why he had no time to look at the sky or notice the absence of the moon. He had other things to deal with. When he had climbed up the stairs of the temple and walked between the pillars towards the sacristy, another thought that raced through his mind was a question. He kept asking himself why a meeting would be called so early in the morning. He had several guesses but couldn’t lay his hand on any as the tenant in his mind was taking all the attention. As he drew closer to the sacristy, he could hear voices which got louder as he approached. He slowly opened the door and suddenly, the voices vanished. All there was now was silence and various pairs of eyes staring at him. The room was lit with two torches of fire which made it fairly visible to see the faces which housed the eyes which were staring at him. As he entered and closed the door, he began to feel somehow warm and it was then he realized that his journey to the temple was actually in the cold. There were six men there all dressed in priestly robes. One of them, the high priest, walked up to the man with arms outstretched. He placed his arms on both shoulders and said cheerfully, ‘Ah! Zachariah, we have been waiting for you.’ ‘I am sorry for the delay in getting here, your Holiness,’ Zachariah said, ‘I had to finish my prayers and was only informed of this meeting late yesterday night.’ The high priest nodded in agreement but remained silent as the five other priests now fixed their gaze on him, waiting for him to state the reason why they were all gathered there so early in the morning. He didn’t say anything and this made Zachariah a little more curious as he said, ‘May I ask the reason for this meeting?’ ‘Zachariah,’ the high priest cut in, almost immediately, ‘you are the reason we are all here.’ Zachariah drew closer. Now that he was the reason for the gathering, it was only appropriate that he hears every single word of whatever it was that they had to say. ‘I am listening.’ ‘Well, you see,’ the high priest continued, ‘we are all men of the most high God and we follow the laws as handed over to us by Moses and the prophets of old. We are all holy in this service and as a result we are also holy in the sight of God. He has bestowed upon us everything that we ask for and has denied us nothing.’ He turned to face the other priests and said, ‘Am I speaking the truth?’ ‘You are,’ they echoed in agreement

The Chronicle of Christ details the life of Jesus from birth to his baptism. It features some of the hidden moments in his life and also brings to the forefront the plot by Lucifer and his army to avert the birth of the messiah and plunge the world into chaos.

Anthony Onugba is a Nigerian-born writer who has a flair for writing. He has published two previous books, Mixed Emotions (2006) and Reflections (2010) and has countless unpublished works. He currently resides in his home country.