It Will Stand: Student's Book

In Home Bible Study for Teens 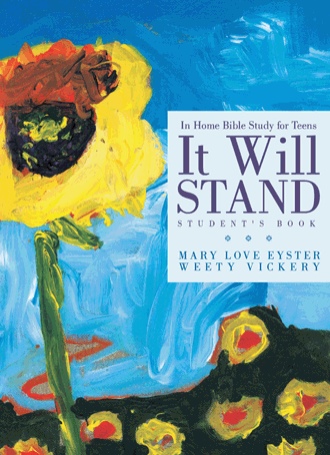 Jesus – The Centerpiece of the Word

Suppose a man were to walk in here right now and claim to be God in human form. Would you believe him? Don’t you think we would ask him for proof? After all, in this era of identity theft, our credentials that prove who we are have become very important, and we are required to tell or show them on certain occasions.

What are some credentials that can be shown to prove who you are?

When God sent Jesus into the world, he knew people would be very skeptical. After all, nothing like this had ever happened before. He wanted people to recognize Jesus as who he really was, God in the flesh, so God gave Jesus some important credentials that would authenticate his claim. Think about it—if God became man, what credentials do you think he should have? What would we expect him to be like?

If God became a man we would expect his birth to be different. And Jesus’ birth was.
What was “not the norm” concerning Jesus’ birth?

If God became a man we would expect him to be without sin, to be morally perfect.

What did Pilate say about Jesus at his trial? Luke 23:4

When Jesus asked his enemies what sin he had committed, they were unable to name a single one.

If God became a man we would expect him to have an acute sense of his difference from others:

Remember the 12 year old boy Jesus when he accompanied his parents to the temple in Jerusalem and Jesus stayed behind. When his parents questioned him, Jesus said, “Do you not know that I need to be about my Father’s business?”

How can an ancient book make a difference in the life of a modern teenager?

It Will Stand is a new approach to teenage Bible studies that focuses on the root literature of Christianity, the Bible.  Many teenagers know parts of the Bible but do not realize that it tells one story from cover to cover. They might also ask how the Bible can be understood and applied to their own lives.   It Will Stand addresses these questions: where did the Bible come from, and  how do we know it is real?

The second half of the book shows today’s teen how to apply biblical truths to everyday living.

Upon completing this study, teenagers will have a greater depth, understanding, and application skills of the greatest book ever written.

Elizabeth "Weety" Vickery is a native of Decatur, Alabama, where she has lived, married to Mike Vickery for thirty-two years.  Together they have raised three daughters, who have multiplied to a family of fourteen.  She has led in-home Bible studies for the past seven years.

She says, “I am constantly amazed at the dedication of my teenagers to attend a weekly Bible study (especially since the last four years we have met at 6:30 a.m.).  The same Living Word that has spoken to individuals throughout the ages is still touching hearts and changing lives.  My husband, Mike, thinks they come for his good breakfast, but we know it is their hunger to hear the truth of God's mighty Word.”

What a joy it has been to work with my mother on this book.  This was a particularly difficult year, as we were grieving the loss of my father and her own battle with cancer.  Her sweet attitude during both was evidence of her close walk with God for many years.

Mary Love Eyster has been teaching Sunday school and various Bible studies, including Community Bible Study and Friendship Bible Coffees for over thirty-five years.  She and her daughter, Weety, provided three teenage Bible studies, one for each of Weety's daughters, and taught each one from the time the girls were in fifth grade until they graduated from high school.  The pair generated most of their own curriculum, all the while wishing they could find just the right material they needed for this age group.  Other people around them have expressed this same need, so the lessons found in It Will Stand have been written to encourage and assist those who would like to teach a teenage Bible study.

Mary Love has lived in Decatur, Alabama, for fifty-five years and spends much of her time enjoying her family of twenty-three, all of whom live within twenty-five minutes of her house. She also writes a weekly devotional which is posted on her blog, mlovenotes.blogspot.com.