A Devotional Study of the Lives of Peter and Paul 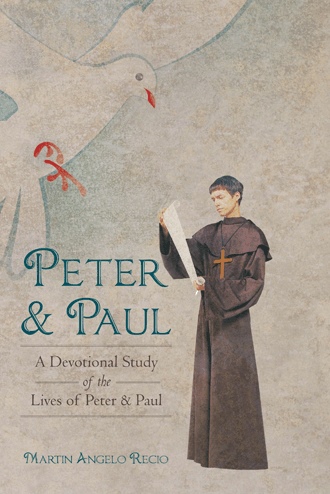 PETER AND PAUL
CHAPTER II
PETER: THE ENCOUNTER WITH CHRIST

The story of Peter's encounter with Christ is found in the Gospel of St. John:

Andrew first found his brother, Simon, and he brought him to Jesus.

...Jesus looked at him and said, So you are Simon the son of John.

When Christ, the long expected Saviour of men walked by John the Baptist and two of his disciples, John the Baptist proclaimed: "Behold, the Lamb of God." His chracterization of Jesus touched the hertstrings of John's disciple, Andrew. His response to John's words came immeditely, for faith in Christ was born in Andrew's heart. Both he and his brother, Simon were John's disciples.

John had appeared as a voice crying in the wilderness, the harbinger of the Kingdom of God. And Andrew understood the spiritual meaning of his mentor's words.

Jesus of Nazareth, who was beging his ministry, was the promised Messiah, the Redeemer come from the heart of God. This was he of whom Moses in the law and the prophets did write. Andrew knew his teacher in these things, John the Baptist. He knew his truth, his courage, and the depth of his spiritual perception. Andrew had found the Christ of God and wanted his brother, Simon, to find Jesus also. So immediately, he first found his brother and brought him to Christ.

1. THE FIRST ENCOUNTER WITH CHRIST

When Andrew told his brother, "We have found him," we can believe that Simon, rash, impetuous, and quicker to react than Andrew, wanted to meet Christ face to face. Like his brother, Simon also had been a diligent disciple of John the Baptist. The Baptist called for a heartfelt repentance, for men to turn toGod, to flee from the wrath to come. John had proclaimed the Kingdom of heaven to be at hand. And John's spiritual teaching had filled Simon's heart with faith, hope, and desire. He longed for the day of Christ's appearing, and now that day had come. The day came with the appearance of the Lamb of God, and Simon would see him face to face.

Simon would remember always, when his hope in the Kingdom has been inflamed by his first meeting with Jesus of Nazareth. He wuld recall when God the Father, in Jesus Christ, had touched his soul. He would rememer that first moment of grace, when the love of our Lord Jesus Christ had warmed his

heart. It had left him with desire as a bush aglow with the fire of God. Simon Peter would remember because Jesus of Naareth had baptized his soul withthe Holy Spirit and with the flame of God's eternal love.

And is it not so even with us? We may not remember the exact day, or wven the moment, but we remember the experience. We remember the feeling of grace and love shed abroad in our hearts at the first meeting with the Lord Jesus.Although the circomstances may be different, we have our own personal relisious experience that our soul has gone through. We experienced the awakening to spiritual realities. And our hearts responded with faith and hope in Christ Jesus.

Still with some individuals the sense of the spiritual encounter may last only a day or two, because they have not permitted the experience to penetrate deeply within. Others become careless and neglectful, and over the passage of time, the glory and memory of that moment fade away. But in the measure of the gift that has been given us, the afterglow of our Lord's glory can remain with us, like a slow, eternal flame. It pervades the soul, overwhelming the heart, and eventually takes possession even of our minds. In his gentle way, without our being aware of it, the Spirit of Christ plays out his role, working in our lives the wonder of his grace. The world may wonder at it, and we wonderat it also.

> When Jesus and Petrer met for the first time, Jesus looked steadily at him. And in a strange and mysterious way, Peter felt compelled to stand stone still. He was unable to speak, for in the presence of the Lamb of God, he knew not what to say. Simon sensed that it was the look of The Eternal, the look of himwhose eyes are as a flame of fire, sounding the depts of his soul. Like theFather of our spirits, Jesus saw beyhond the mere outward appearance. He to whom nothing was hid saw beyond the grooming, the dress, and the manner of walking and speaking. Looking not as men look, the Savior, in sounding the depths of Simon's soul, scrutinized the big fisherman's heart. Our Lord Knew that here was a man who would serve the Kingdom of Heaven.

Still, the Master of earth, skies, and ses revealed non of this to Simon Peter. The proper moment would come later on, when Simon was ready. The Lamb of God, under whose shelter he had come to trust, would give Peter grace sufficient for all his endeavours. And thie unlettered fisherman woulde become a fisher -of-men and cast the Gospel net for the Kingdom of God. When the fulness of time came for Simon Peter, he would speak with the eloquence and power of the Spirit And men who will have heard Peter speak, would marvel--tht upon flesh and blood, they saw the outpouring of the Spirit. They would see also the grace of our Lord Jesus Christ in the big fishermnan. And those who believed would experience the transforming power of the Spirit.

The spiritual development of Simon Peter was slow and gradual. He loved the kingdom of our Lord, but always spoke before he thought. He abounded in energy, though at times it was misdirected. As he stood by the side of the Master, his spiritual perception grew. Slowly and surely Simon Peter grew into a man of the Kingdom. And at Pentecost, there was no voice proclaiming the coming of the Holy Spirit louder than that of Simon Peter. He became a rock of the Kingdom. From common clay, he became a living stone, an builder-up of the Kingdom of heaven. So it may be for all who turn to the Lord Jesus.

The conversion of Saul of Tarsus, otherwise called Paul, was sudden and dramatic. In one encounter with the risen and glorified Christ, Paul was turned to the Lord Jesus. The acceptance and peace with God, which he had sought for so many years, was his at last. And he found it through simple faith in Christ Jesus. The love and grace of Christ overflowed for him; and he was elevated to an apostle for Jesus Christ.

Rev. Martin A. Recio served thirty years in the pastoral office. His degrees include an AB in history from Northwestern College; a BD from San Francisco Theological Seminary; and a JD from Lincoln Law School, Sacramento California. He and his wife, Lorene, have one daughter, two sons, and seven grandchildren. He and his wife live in Ashland, Oregon.