Lessons on How to Walk Through Life's Emotions. 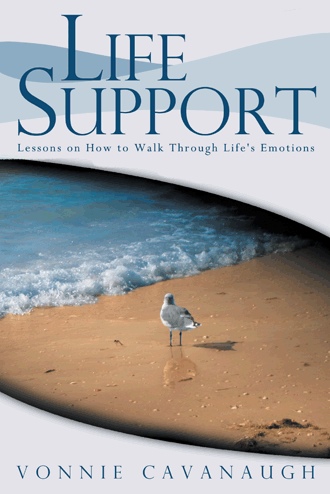 The first visit in January with Gary to the doctor’s office was the shock of a life time. It was the day the doctor told me my husband was very ill. “Terminal kidney cancer”, he said so very quietly. I sat there listening in dead silence as he went on to say; I can’t guarantee you will get him home alive. I can’t even guarantee you one more day to have him with you.
Horrified, I looked at him, then at my husband. I turned back to scream at the doctor, “He’s not sick! He’s still working! Do something! Don’t just sit there! You are wrong!” Gary got up from his chair and came over to where I was sitting and held me, saying, “Hon, we all have to go sometime.” How could he be so calm? He wanted to go home. Of course he would come home. He was not going to stay at the hospital!
We went from the doctor’s office to where he worked so he could tell them he wouldn’t be working anymore. There wasn’t a dry eye in the office except for Gary’s. He didn’t cry. He knew long ago and had already accepted it. He just didn’t tell anyone.
After arriving home, I needed to be alone with my thoughts. Walking outside the house in a daze, I looked at my pitiful yellow rose bush through tears. I thought how short life was. Just like this rose bush. It was all dead except for one bright stem of green. It’s not fair. He’s too young. He’s only 48. Why? I remembered how the two of us so carefully planted this rose bush so long ago.
With tears streaming down my face, I could barely see the big yellow bud on that one lonely stem. One bright spot in an ugly day. Two days later it was a magnificent huge yellow rose without a blemish anywhere on it. I cut the rose, put it in a vase and filled it with water. I set it next to where Gary always sat, next to his favorite chair. As I looked at Gary, he didn’t even look sick. The doctor was wrong! But I knew I had to accept it. I saw the x-rays.
For the next three weeks I pasted a smile on my face. I walked around as if nothing was wrong; telling no one my wonderful husband was leaving. I did just what that beautiful yellow rose did. I didn’t wilt. I wondered how I was supposed to hold up for my son and not cry for Gary’s sake. He didn’t want any tears, “Just remember I loved you.” As the days went by, I would look at the yellow rose. It was already 2 weeks old and still not one blemish appeared on it. I thought why can’t life be like that. I knew I had to do just what that rose was doing. Keep on living.
Then Sunday morning came and looking at Gary, I knew he wouldn’t be here tomorrow. I went outside and for the first time in 20 years I prayed. I prayed God would come here and put his arms around Gary and take him home. ”Please don’t let him suffer”, I whispered. I didn’t know until later my son was saying the same prayer in the front yard.
God answered both our prayers late that evening. Our home seemed to become so peaceful and warm even though the house itself was cold. For some strange reason – all of a sudden – I didn’t feel alone. There was someone else here. My son got up from his chair and said, “We can go to bed now, mom”. I went to check on Gary for what was to be the last time. I came back and told my son, “I think he’s sleeping, but I don’t think so”.
We called the fire station as we were instructed to do. After opening the door to let them in, I asked them not to wake him if he was only sleeping. They came back and said, “I’m sorry, he’s not sleeping”. After awhile they all left, taking my whole life with them.
I looked at the yellow rose next to Gary’s empty chair. It was still a perfect yellow rose without a blemish on it. I asked, “How long are you going to live rose? The bush you came from is already dead.” The rose seemed to answer my question,”You cut me off my dead rose bush and brought me into your home. I’m perfect without a blemish even though my bush isn’t here. Just like God took your husband to His home where he is now perfect without blemish.
That beautiful yellow rose was perfect for one more week. I then left for Minnesota. When I returned a week later, the yellow petals were lying on the table and so was my life – made to start over.
Then God put me on a roller coaster ride which hasn’t stopped yet. At this point in time I didn’t know I was going to become a believer in Christ. I didn’t know then I would marry again and my new husband’s name would be Garry also. Same name, just spelled different. I didn’t know then that Garry would be in a motorcycle accident. I didn’t know someone would run a stop sign and hit Garry only a few blocks from home.

DO YOU WISH TO KNOW GOD’S LOVE AS HE COMFORTS YOU?
DO YOU WANT TO KNOW HOW GOD HAS HELPED OTHERS
THROUGH THEIR TRIALS AND TRIBULATIONS?

In Life Support, the author has approached a multitude of topics: aging, anger, pride, changing your attitude, learning to be content, dealing with guilt, finding joy, and knowing God more as you walk with Him.

In God’s comfort, we find He has all the same emotions you do, and one should derive a sense of joy from this knowledge, even when facing harsh realities such as death and loss. With the help of God, you have the ability to make your life all it can be! You may look back at the window of the past or look forward to the door of the future! Which will it be? It’s your choice!

The questions presented in Life Support will allow you to start your own Life Support Class, where you and others can learn how to make better decisions and have more faith than you ever had before.

VONNIE CAVANAUGH grew up and lived most of her life in Minnesota, where she graduated from high school. Having worked many diversified jobs, she is now retired and lives in St. Petersburg, Florida. The author has two children and is twice widowed. Her first husband died at the age of forty-eight from cancer and her second husband passed at the age of seventy-one due to a motorcycle accident.

Vonnie’s favorite pastimes include making slide shows from all the pictures she has taken, and writing short stories about life’s events.

Vonnie found the inspiration to write Life Support after creating lessons based on the different emotions we experience on our walk with God. She has effectively taught classes at her local church based on these principles.