Grace Through Every Trial 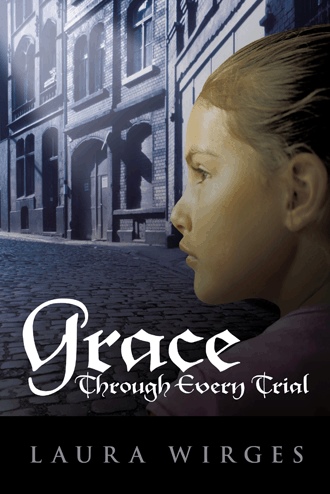 It was one dimly lit night that I wandered unseen by most but not all mankind. Three men miraculously took notice of my indistinguishable form in the shadows. They were all dressed in fine, expensive suits that would make anyone stare while I, only covered by filthy, torn rags, was not fit even to spit upon.

“What is that thing?” one of them pointed.

Another one stepped closer. “It is a…girl!” he gasped and stared in horror and unbelief.

The last one who did not appear interested in the others’ discovery stood annoyed tossing his red apple up in the air and catching it again as it fell down. I could not force myself to stop staring at it. It was so big, and it looked so juicy. In my wonderful imagination I had already enjoyed and consumed every tiny bite of it.

“She is staring at your apple,” the first one noticed.

The man suddenly became interested in the situation, no doubt, looking for some amusement in his extreme boredom. “Want it?” he offered holding it out to me, but as I reached for it, he pulled it back to himself lifting it to his mouth. He looked at my disappointed expression and smiled with satisfaction as he took a large bite. He chewed it for a moment then spit it out in front of me. I had no sense of pride or dignity; I only had hunger. So in desperation, I licked it up from the ground. Even with my revolting behavior, I had shown more manners than the beast who stood before me laughing in his arrogant pleasure. However, I was tempted to use whatever force necessary to rip the rest of the apple from his hand, but even in my anger, I was not ignorant of my weakness. I would not have had the strength to fulfill my wishes, no matter how hard I tried.

“That is no girl!” the man with the apple laughed, “It is just a stray dog.” He was extremely proud of his cruel demonstration that had revealed my true nature or instincts, whichever you prefer to use.

I growled as he and his heartless friend walked by continuing to laugh. I knew I was proving his claim of me was correct, but at that moment, I did not see a point in caring. I displayed my most horrifying, animal-like behavior and hoped that it would give them nightmares later. I turned to see the man who was kind enough to identify me with my original species still staring in unbelief.

“Poor child,” he finally spoke. His words hurt my ears, for I had not heard the sound of sympathy in a long time. “What has driven you to this existence?” his eyes did not show disdain nor his actions hate. He reached into his pocket and pulled out an apple wrapped in a clean white cloth. This one was more appealing than the one I had seen before. It was much larger and cleaner, or maybe that was just my imagination trying to make me feel better. Whatever the case, this apple had not been pre-chewed. He sat both the cloth and the apple on the ground in front of me. I did not care if he had only given it to me to mock the way I ate; I enjoyed every fresh, juicy bite. Sadly, the pleasure only lasted for a few minutes before the entire fruit had been devoured.

“I’m a doctor,” he kept his voice low; “I can help you.” He stepped closer, but I only jumped back keeping the same distance between us. Then, he knelt down and held out his hand to me. I studied his expression trying to understand, trying to uncover his true intentions. I crawled closer and sniffed of his hand like some kind of dog. I was very cautious; if he made any sudden movements, I would dash back into the shadows. However, he remained still just as if he had become stone. I growled and hissed at him just to see his reaction. I acted more like a deranged cat than any part human. The only human quality I possessed was my looks, and even that was distorted to look more beast than girl. I had stayed away from people so long I had forgotten how to react to compassion. I was confused and uncomfortable, so with one last look into his caring eyes, I ran back into the darkness.

Driven into an animalistic existence, Victoria struggles to survive each night as she lives on the streets; however, when she is rescued by a compassionate doctor, she faces new challenges as he tries to help her become human again. Victoria fights with a past she cannot change, a present she tries to change, and a future she's scared won't change. Interrupting her repetitious cycle, one act of compassion transforms everything. With their hearts full of love Victoria can't understand, a doctor and his sister voluntarily take on the challenge of helping her and becoming her closest friends. They face heartache, trials, and multiplied sorrows, but realize and strive to teach Victoria that the One who brought them together has a grace that is always sufficient.

When Laura Wirges began classes at the Missionary Baptist Seminary six years ago, some of her professors suggested she pursue a writing career. She had an article published in the Seminary’s paper, the Searchlight, and upon graduation, she was hired to help proof read that paper. She has always enjoyed writing and can remember writing several short stories when she was younger. When she was fifteen, however, Grace through Every Trial became her permanent project for the next seven years. Laura continues to write and still enjoys her job at the Missionary Baptist Seminary in Little Rock, AR.