The Adventures of the First Lollards 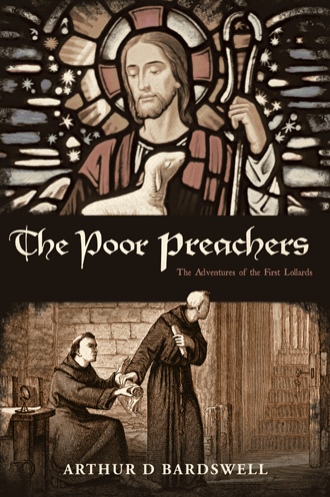 ‘Do those in the high places of Holy Church follow thy lead? Answer me that, John Wycliffe!’
Wrath flashed in the sunken eyes of the other man. ‘Nay! They do not so!’ he roared in return, breathing heavily in his anger. ‘Long have I laboured and in vain, that ye all would hearken – not indeed unto me – but to the warnings of Holy Writ and the doom and reproach that hath come upon this land for its iniquity! The poor become poorer! Many lords of the realm do oppress them and the profligate and orgulous princelings of Holy Church do naught but bathe in her riches! Indeed, more oppressive yokes they lay upon the backs of the people also! Methought that either pontiff – whosoe’er he be – mayhap would right the gross sin that aboundeth within the church! But nay! Rather do they embolden their bishops to bleed dry the people, whilst they themselves live in profligacy! So be it, then! If the guests invited be indurate and cometh not to the feast of the King of Kings, then go we forth into the highways and byways and bring in the poor!’
The students were on their feet applauding thunderously, and cheers broke forth. There were repeated shouts of ‘Amen!’ and ‘God save thee, Doctor Evangelicus!’

After suffering the Black Plague, the Great Famine, and ongoing war with France, the common folk of England didn’t need a corrupt ecclesiastical system that bled them dry.

Into this dark time came Doctor John Wycliffe, the "Morning Star of the Reformation", who raged publicly against the abuses within the Church of his day.

Doctor Wycliffe engineered the first English translation of the Bible for all to read, and he inspired his followers, commonly called Lollards, to go into the English villages and towns to preach the gospel according to the Scriptures. The impact these men had upon the ordinary folk was almost as amazing as the adventures they experienced. Men from humble beginnings — like William Shephard and Thomas Plowman — rose up to shake the Church to its core and change the course of English history.

The Poor Preachers is an epic tale of courage, faith, and the right way to swing a scythe!

Arthur D. Bardswell lives with his wife, Anne, and one of his three grown children in Melbourne, Australia. He has been involved in a number of interesting areas, from teaching gardening in a women’s prison to minding Reg Ansett’s indoor plants. He also teaches computer skills to technophobes and acts as door warden to two super-spoiled cats.

He has had many years of experience in writing, mainly for pleasure. His mother wrote scripts for the ABC, and it was she who first inspired him to write. Since then he has joined the FaithWriters writing community, risen to Master Writer level, and had some of his short stories published in their quarterly publication.

His enthusiasm for history, combined with his faith, inspired him to write the Poor Preacher series.