Prelude to a Constitutional Renaissance 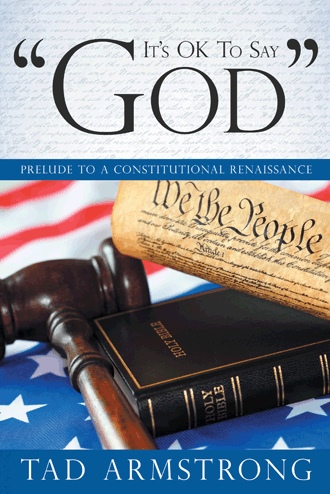 Harken back to Christmas of 2008. The scene was the State Capitol building in Olympia, Washington, where the governor okayed the annual Christmas tree and nativity scene to be displayed. After an atheist group requested their display to be erected, apparently the governor yielded and that lit Fox News’ Bill O’Reilly’s fuse.
The atheist display was a placard that read:
There are no gods,
no devils,
no angels,
no heaven or hell.
There is only our natural world.
Religion is but myth and superstition
that hardens hearts and enslaves minds.
For what seemed at least three weeks, O’Reilly gave the atheists some of the best free advertising they could have ever hoped for. He berated Governor Gregoire for “allowing” this to go on. It seemed like the atheist creed was displayed every night on national cable television.
I do not for a moment doubt his sincerity, but Bill, if you read this, I hate to tell you that you were wrong. Why? Because you…were ignorant of the law on this topic.
Although I believe the Supreme Court got it wrong in Lynch v. Donnelly, that made the Seattle caper perfectly legal. As I predicted, when that majority allowed the shabby nativity scene to be displayed by local government in Rhode Island, the Pandora’s-religious-symbol box was opened in Washington State and around the nation.
Eventually, Washington’s Republican Attorney General and Governor Gregoire put out this statement:
The U.S. Supreme Court has been consistent and clear that, under the Constitution’s First Amendment, once government admits one religious display or viewpoint onto public property, it may not discriminate against the content of other displays, including viewpoints of nonbelievers.
During the ensuing days and weeks following O’Reilly’s initial tirade, I believe additional displays began appearing at the State Capitol building including a Menorah, a Kwanzaa display and, eventually, a display celebrating Seinfeld’s Festivus. Nothing wrong with a sense of humor. This parade of religious symbol displays was caused by the Lynch v. Donnelly decision.
God is on time every time! As I was completing this chapter, I ran across a second true story. You will never guess where it originated - the real Berkeley, California.
With Christmas 2006 only weeks away, there was trouble brewing from factions that wanted the city to display a nativity scene and those that wanted to block it and even those Christians who didn’t want any part of it if the only way it would prevail would be to commingle it with plastic junk.
The display in question included three wise men, animals, an angel, a wooden manger and scattered piles of hay. Get this! When the ACLU threatened a lawsuit, the city moved Santa’s mailbox closer to the nativity scene. No doubt, the city fathers had read Lynch and knew they would have more success if they junked up the display that seeks to honor the birth of the Lord Jesus Christ.
Ultimately, the Berkeley City Council felt they had two choices: (1) to secularize the display enough to make it acceptable to the ACLU or (2) get it out from under City control in some fashion. In a 6-1 vote, they chose to give it to the Berkeley Clergy Association to display on church property.
This used to make me sad, but anymore it makes me angry. Christians, please, honor God and stay away from mixing our sacred symbols with government. In my opinion, you are playing right into the hands of the opponents of Christianity.
***
“Self-governing begins at age 18. Education to prepare for life ends there for many. Education to live life begins there for all – and never ends unless and until defeat finds a home at your house.”

***
“Have you noticed that just when every unimaginable human activity is coming out of the closet, we seem to have put God in the closet?”
“I would like to encourage you to discuss these powerful topics with your teenage children and friends. Many enemies of this great nation likely know our Constitution better than we do. Knowledge will forever rule ignorance, so we must gain the knowledge necessary to, once again, govern as intended by those who designed this marvelous document. The stakes are very, very high. We cannot possibly preserve freedom unless we teach our children our history. I wonder how many young citizens understand the meaning of America.”
***
“In order to avoid strife between various faiths or within various faiths and, therefore, in order to help religion flourish and prosper, there should be at least a “short fence of separation” between Caesar and God. If the divider falls, government will strong-arm religion.”
***
“Words like ‘God’ are not vulgarities for which the shock value diminishes with each successive utterance…” Van Orden v. Perry, Justice Thomas in concurrence.
“The wall that separates the church from the state does not prohibit the government from acknowledging the religious beliefs and practices of the American people…Nor does it require governments to hide works of art or historic memorabilia from public view just because they also have religious significance…The state may provide its schoolchildren and adult citizens with educational materials that explain the important role that our forbears’ faith in God played in their decisions to select America as a refuge from religious persecution, to declare their independence from the British Crown, and to conceive a new nation.” Van Orden v. Perry, Justice Stevens in dissent.
***
Our Constitution very definitely does not use the word “wall” or “separation,” and, hold onto your seat, it does not, therefore, use the phrase “wall of separation.” You probably knew that. You may also believe all of the hoopla over this metaphor actually matters.
The “wall of separation” is the phrase used for understanding “establishment.” It is not something we need to climb over, go around, crash through or tear down. Rather, it is a metaphor (and nothing more) that we need to “get over,” as in “accept.” Christians see red when confronted with what they have been led to believe is a wall constructed solely by Thomas Jefferson, but it is my considered opinion that Christians need to see it for what it is – a red herring.

“Our Founders would not recognize today’s America. Christianity is under attack as never before. My career as a Baptist minister and as chaplain of the Texas House of Representatives has, in a sense, taken me to both sides of Jefferson’s metaphorical ‘wall of separation.’ Mr. Armstrong puts it a bit differently: ‘There should be at least a short fence of separation between Caesar and God. If the divider falls, government will strong-arm religion.’ Instead of relying on sound bites, headlines, and e-mails, he takes you straight to the Supreme Court opinions that have shaped the religion clauses of the First Amendment. You will likely be very surprised at what you find. It’s OK to Say ‘God’ brings the Constitution back to Main Street where it belongs. His commentary is both eye-opening and refreshing. His suggestions of how Christians should respond to the culture war focus more on fulfilling the mission of Jesus Christ than on whether a nativity scene or a Menorah should win the favor of the courts at Christmas. Whether you decide to implement his suggestions in your life or not, Mr. Armstrong is most concerned that all Americans stop living in ignorance of these most important laws of our land. Learn as a family—discuss these truths with your children and grandchildren—and start living your faith out loud, for contrary to false rumor, it really is OK to bring God back into our culture and back into our government. Tad will show you the way.”

A product of the Universities of Illinois and Texas, Tad Armstrong practices law, writes a monthly op-ed column for the St. Louis Post-Dispatch, teaches constitutional law at Greenville College, and is a frequent guest on talk radio. He founded ELL Constitution ClubsTM and has written a three thousand-page treatise on the subject. Tad and his wife, Melody, reside in Edwardsville, Illinois.