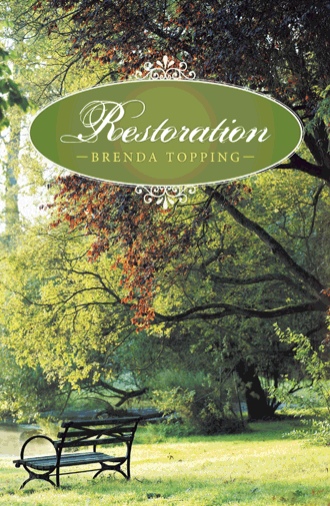 Elsey flinched as the hot tea touched her lips. She gently placed the cup on the saucer at the edge of the coffee table to cool. She always enjoyed drinking from those delicately fragile cups; a set of fine china her mother had given her a few years ago. She curled up on the soft, brown, leather love seat in the den, covering her legs with the beautiful dark blue cashmere throw that she had recently purchased. The silk pajamas that she was wearing did not keep her warm, but it was too early in the season to turn on the heat in the house. She lazily looked through the large, shiny, glass bay windows, her mind drifting from her thoughts. First, she gazed at the cloudless blue sky, and then diverted her attention to the squirrel sitting on the rail of her deck, cleverly eating a nut while skillfully balancing on its two back legs. It turned its head around as if it knew she was watching and then quickly scampered away. Elsey’s gaze fixed on the trees that skirted deep into her backyard. The once green leaves had turned into spectacular shades of magnificent orange, stunning cadmium, and boisterous vermeil. The combination was breathtaking. Fall was once her favorite season. She sighed deeply, opening up her lungs and inhaling as much air as she could, then, slowly deflating them to relax her body. Sadly, she thought of how the wind would later arrive, unclothing the tree by stripping the leaves from its branches. The trees left naked and desolate to face a possible long, bitter, and brutal winter in hopes of an upcoming spring of wonderful budding of new life. Once there is life, there is hope. Comparing the seasons to her own life, she thought about the times that left her heart feeling barren and the times she felt rejuvenated. Her heart pounded and her palms sweat just thinking of the memories. She picked up the cup and slowly sipped her tea. She tried to repress the memories of that cold and unforgettable night, the night that changed her life. It was as if it had happened yesterday. *** She remembered waiting patiently for the sliding glass doors to her office building to open. Elsey always thought they needed to get those doors fixed, which would sometimes have a delayed opening. Outside of the warm building, the wind was stinging and cold, sending chills up her spine. The October temperature was at its record low with strong winds that blew September right off the calendar. She tightly closed her beige trench coat closer to her body and dropped her head as she fought against the wind while walking down Washington Street. Hoboken was known for its nightlife and spectacular view of Manhattan. She passed by the bustling, brightly lit restaurants that she inadvertently walked by every night after work. That night, however, Elsey thought of stopping in a local bar to have a quick drink. She wanted to treat herself for the recent promotion she received, an accomplishment that she well deserved. She often thought that the idea of Happy Hour was pointless and simply an excuse for alcoholics to drink, but that night she decided to join the Happy Hour crowd. The wind picked up and almost blew her off the sidewalk. It announced itself with a chill that made the bar that she quickly entered feel warm and cozy inside.

Elsey recalled the explosively loud heavy metal music blasting as she opened the heavy door of the local bar called ‘Nine’. How creative, Elsey thought. For once, she enjoyed seeing the plethora of happy faces that surrounded her. Usually, she spent most of her time at work, listening to her co-workers whisper about the latest office gossip. Tonight, though, Elsey felt liberated and delighted as she sipped her sophisticated cosmopolitan, a drink she rarely ordered. As she sat at the bar by herself, she looked around at the different groups of people, wishing that her friend Renee was there to celebrate the special occasion with her. She was just envisioning how good her nameplate was going to look on her big oak desk, “Elsey Manchester, CPA,” and the arrangement of her brand new office when he tapped her gently on the shoulder. “Is anyone sitting here?” he asked, removing his jacket. “No,” replied Elsey, looking at him from head to toe. “Can you believe the weather outside?” he asked, easing himself onto the bar stool next to hers. She did not reply. Instead, Elsey pulled her skirt down and shifted her weight away from him, hoping he would get the message. “Can you believe the weather?” he repeated in a louder tone, practically screaming in her ear. Elsey rolled her eyes, directed her attention toward him and replied, “No.” “I can barely hear you,” he yelled while moving his bar stool closer, his face inches away from hers. “I agree,” shouted Elsey, pulling back. She had an anxiety about personal space. The last time she was at a concert, the guy behind her continued to push himself against her, and her sweater changed from a light pink to a dark pink from all the sweat. She was traumatized from the experience and she promised herself she would never get that close to a complete stranger again. “I can’t wait for the summer to come…” The bartender interrupted his sentence, pointing at him to take his order. “Vodka with orange juice.” Elsey noticed his handsome features: his strong jaw line, his beautiful lips, and his brilliant brown, curly hair. The light from the bar illuminated his features in the dim room. As he turned to Elsey, she quickly looked away. “Can I buy you a drink?” She shook her head. “No, thank you. I’ve had my max. I’m about to leave actually,” said Elsey quickly trying to finish her strong Cosmo. “Oh c’mon. One more drink won’t hurt you.” The bartender waited, impatiently looking at the both of them, and then at the long line of people awaiting service. Sternly, Elsey repeated to the man and the bartender, “No.” She explained, “For me, more than three drinks can cause serious side effects. So I think it’s best if I get going.” Grabbing her trench coat and her purse, she elegantly lifted the glass, pouring the rest of the pink liquid in her mouth, burning her throat as she swallowed. “Aw, side effects could be fun.” Elsey caught the smirk on his face and was disgusted by his perverted mind. “… or dangerous. I know my limit.” As she was about to get off the stool, he gently touched her shoulder. “Don’t let me scare you away,” he said, “I am just trying to be nice. Good company is so hard to find these days.” His big grin exposed his white perfectly even teeth that made him look even more handsome.

Elsey, a naive, young, and beautiful woman, is victimized in a terrible crime and ends up beaten and raped. She is horrified when she finds out that she is pregnant. Her dream is to be a mother, but how can she keep this baby? Her parents are outraged and insist on her terminating the pregnancy. The thought of that horrible night gives her chills and leaves her wanting revenge. For Elsey, abortion is not an option. Her only choice is to put her future in the hands of the Lord.

From birth, God gives everyone gifts and talents, and if one does not use it, then it will be a waste. A gift from God is something Brenda Topping would like to keep and forever cherish. She has a passion for writing, and believes if she can inspire even one person and make a difference in their life, then she knows she has accomplished something.

Brenda lives in Doylestown, Pennsylvania, with her husband and family. Growing up in St. Elizabeth, Jamaica, her dream was to become a writer.