Please God, Let There Be Another Boom

Faith and Hope at Work in Lean Times and Good Times 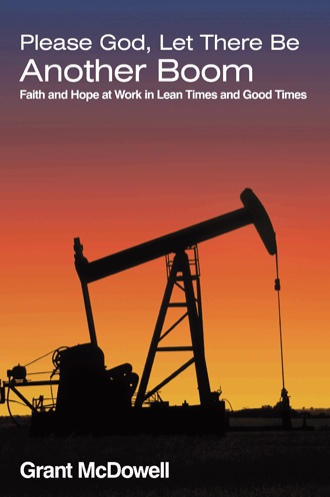 God calls workers to community with each other; he calls them to be the church. The church consists of those God has called to declare his glory everywhere, including the job site. Scripture declares, “But you are a chosen people, a royal priesthood, a holy nation, a people belonging to God, that you may declare the praises of him who called you out of darkness into his wonderful light.” (1 Peter 2:9) As God’s priesthood, Christian workers infuse community into their work world, bringing an attitude of reconciliation to their work.
Christian workers are God’s priests in the workplace. But rather than lead ceremonies, they bring God's presence into their work by participating as servants in their work communities.
We are called to peoplehood, not to point to ourselves, but to show forth the wonderful deeds of him who called us out of darkness. To be God's priestly people is to give our lives to the service of the needy and oppressed. To be a holy nation is to aid in delivering prisoners from their captivity. To be a chosen race is to refuse to claim any 'purity' except the purity of Jesus' blood.”
Priestly work is usually subtle. For example, a church member, whose work includes welding and drafting, shared how he was able to serve his boss and fellow workers, because the manager placed him in a position where he could maximize his gifts and bless the company. While some church officials might not view welding as priestly service, this Christian is known for caring about co-workers as well as caring for his work. He does so because he is aware of his calling as God’s worker.
Closely related to the priestly function of Christians is the ministry of reconciliation. God called those who were once far away in order that they will help others toward reconciliation with God and people.
The ministry of reconciliation, however, is not limited to bringing men to God, but extends to the reconciliation of workers with workers. Moreover, all economic, social, and political ideologies are to be captured for Christ. Paul was ready to meet and to take 'every thought [ideology] captive to obey Christ' (2 Corinthians 10:5). For in Christ 'all things were created, in heaven and on earth, visible and invisible, whether thrones or dominions or principalities or authorities – all things were created through him and for him' (Colossians 1:16).
Reconciliation is a vital aspect of priestly ministry at work because conflict is a regular occurrence in the workplace.
Christian workers bring community to the workplace. They do this as God’s representative priests whose liturgy is their consistent, humble service. And they offer community at work through modeling the ministry of reconciliation. 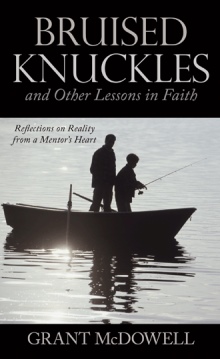 Bruised Knuckles and Other Lessons in Faith
Grant McDowell
$11.95

Do you feel that taking your faith to work is as welcome as driving a truck through a living room? Please God, Let There Be Another Boom is a reasonable and helpful guide, showing foundations for integrating faith with work, and exploring the practical impact of faith at work. In an era where workers change jobs or move from city to city in order to sustain themselves and their families, hope to continue will be found in these chapters. After pouring solid footings for faith at work, the author presents ten important areas where workers balance belief with business. These areas include: …
• authority
• relationships at work
• verbal witness
• pay and its problems
• rest
• meaning at work
• prayer at work
• and more!
For over thirty years, author Grant McDowell has shepherded people who live with the impossibilities and rewards of the workplace, and he has engaged in their world via his blue-collar background, his involvement in the local business community, and by seeking ways to encourage those who refuse to pretend spirituality is reserved for wooden benches in quiet sanctuaries.

Grant McDowell has a deep appreciation for the business community and is a past president of the local Regional Chamber of Commerce. He has been a pastor for over thirty years, and believes one does not have to park faith outside the workplace. His doctoral work at Gordon-Conwell Theological Seminary was in the area of Christianity in the workplace. He and his wife, Donna, live in Alberta where they love spending time with their adult children, and visiting the mountains when they have opportunities to do so.