Eight Weeks with No Water

A Testimony of a Sustaining Miracle 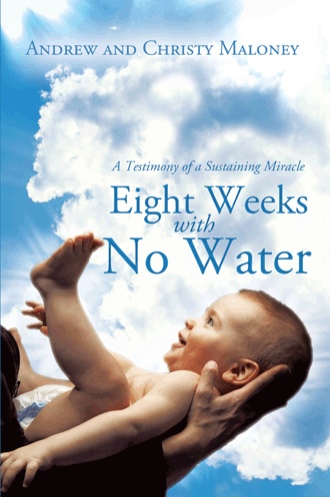 June 21, 2010. Christy was barely eight weeks pregnant. She had been trying to take it easy (as one can with a two-year-old!), so we were taking an afternoon nap, when suddenly she jumped out of bed and raced into the bathroom, bleeding heavily all over the floor and cramping to the point of tears. She screamed out, and I blindly leaped into the bathroom, bewildered and bleary-eyed. Seeing all the blood, I was dumb-struck. What’s going on? Not knowing what to do, she clambered into the bathtub, panicking, but the water immediately turned red from so much blood loss. It was like a crime scene in our bathroom; there was that much blood. I had no idea what to do except pray in tongues. It was scary, and I’ll be the first to admit in those first few moments, I felt no physical presence from the Lord; but He was there, that still, small voice whispering that all would be OK.

Christian Maloney almost didn’t make it into this world. Two miscarriages tried to send him into the Lord’s arms without him ever seeing his parents. Andrew and Christy Maloney thought they were losing their baby. She would miscarry, and he would die. No! That can’t be right, that’s not what God would want. He’d raise the child up, stop this bleeding, sew up her womb. They believed in that kind of God. But the baby wasn’t making it. They couldn’t accept that—not after feeling him kick in there, not after seeing his little face on the ultrasound, not after hearing his heartbeat. “He can’t die,” they said, “we won’t let him!”

That proclamation starts Eight Weeks with No Water, an emotional, true tale of the Lord’s sustaining grace working through faith to go against the odds and bring a remarkable little boy into the world for God’s glory and honor. It is a testimony of fiery trials with compelling insight that proves the walk of faith is worth the reward of faith!

Andrew and Christy live in the Dallas-Fort Worth area with their two sons, Connor and Christian.