Volume 1 The Dancing Hand of God

Unveiling the Fullness of God through Apostolic Signs, Wonders, and Miracles

by James Maloney & With Bill Johnson 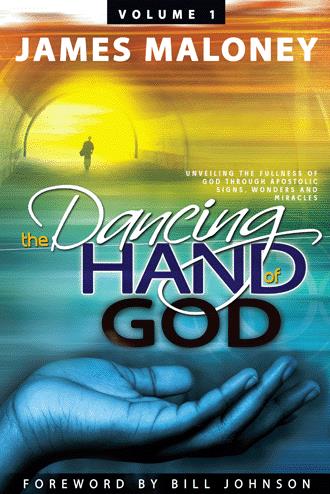 All apostolic miracles deal with the veilings of deceptions. They are gifts given as extensions of who God is to overcome the distorted views of deceived people; they are given to unveil the Personage of God. The enemy attempts to veil Jesus as the Christ. It attempts to suppress the revelation of the breaker anointing and limit an experience in Him. It tries to convince the people that Jesus has changed. That He is another Person. But “Jesus Christ is the same yesterday, today, and forever.” (Hebrews 13:8)

Verse 9 goes on to say, “Do not be carried about [away] with various and strange doctrines….” Thus implying it is strange and variant to say Christ has changed. Beware of this doctrine! Any doctrine that tells you Christ was one way in the past but is not that way now is a strange doctrine you are not to be carried away with. If He healed 2,000 years ago; He heals today. If He cast out demons 2,000 years ago; He casts them out today. It’s as simple a premise as that.

But that is the work of the enemy — the veilings of deception: that there is another Jesus, or another gospel, or another spirit. “But even if our gospel is veiled, it is veiled to those who are pe-rishing, whose minds the god of this age has blinded, who do not believe, lest the light of the gospel of the glory of Christ, who is the image of God, should shine on them.” (2 Corinthians 4:3-4)

“But I fear, lest somehow, as the serpent deceived Eve by his craftiness, so your minds may be corrupted from the simplicity that is in Christ. For if he who comes preaches another Jesus whom we have not preached, or if you receive a different spirit which you have not received, or a different gospel which you have not accepted — you may well put up with it!” (2 Corinthians 11:3-4)

It takes a manifestation of the truth — a truth that exhibits a vir-tue — to unveil this deception. Second Corinthians 4:2 states, “But we have renounced the hidden things of shame [iniquities], not walking in craftiness nor handling [adulterating] the word of God deceitfully, but by manifestation of the truth commending ourselves to every man’s conscience in the sight of God.”

A lack of the supernatural creates a vacuum wherein the truth is not manifested, and a wrong concept of God emerges — it is a “form of godliness.” (2 Timothy 3:5) But in reality God is not heard and seen as how He truly is. There is no proper demonstration of God — He is love, He is peace, He is joy, He is healing, etc. This form of godliness can potentially become idolatry, dear readers! Demons distort and change the image of God, so that the deceived worship it instead of Him.

“…Because, although they knew God, they did not glorify Him as God, nor were thankful, but became futile in their thoughts, and their foolish hearts were darkened… and [they] changed the glory of the incorruptible God into an image made like corruptible [perisha-ble] man — and birds and four-footed animals and creeping things… [They] exchanged the truth of God for the lie, and worshiped and served the creature rather than the Creator, who is blessed forever. Amen. And even as they did not like to retain God in their know-ledge, God gave them over to a debased mind, to do those things which are not fitting….” (Romans 1:21, 23, 25, 28)

This is the doctrine of the Pharisees, which is still prevalent today in the concept that somehow Christ has changed. It takes the signs of an apostle to present the truth in manifestation that Jesus cannot, will not, change! The glory of God is unveiled in the proving of His unchanging word through the miraculous. The glory of God is unveiled through the open-heavens that go wherever apostles and apostolic people go.

The Dancing Hand of God: Unveiling the Fullness of God through Apostolic Signs, Wonders, and Miracles combines two purposes in each of its two volumes. This first volume begins the journey that will unveil the qualities of God by telling the story of the life of its author, James Maloney, and by exploring the apostolic witness to God. He likens the approach to discovering “a balance between storytelling and teaching” that helps the reader “to turn the face of a hurting world toward God.”

This volume of The Dancing Hand of God explores God’s fullness, fatherhood, otherness, acceptance, burden, glory, rule, and availability. Each of the chapters concludes with an outline that lists the main insights offered by each of the sections in the chapter, making the book useful both for one’s personal reflection and for shared conversation.

When you take stock of your spiritual life, you might find yourself confronting a series of challenges, such as loneliness, anxiety, and a lack of godliness. The Dancing Hand of God proposes a remedy for these sources of spiritual sickness: a full-contact embrace in the strong and healing hands of God. By learning from James Maloney’s own journey and his studied explorations of the teachings of the faith, you will find the energy to play your part in unveiling God’s fullness through your working of apostolic signs, wonders, and miracles.