Where Angels Fear to Tread

One man's journey in starting his small business 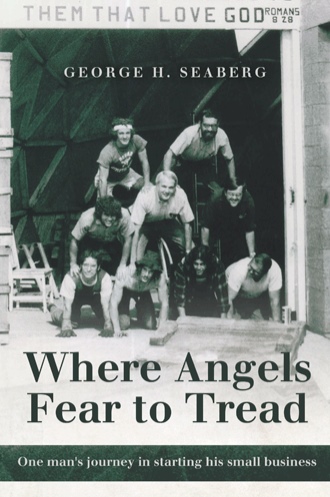 I made my purchase and when I was driving 1 ½ blocks away from the shop I spotted a young man wearing a dirty white T shirt and Levi’s with a ponytail and scraggly beard with a downcast, I-don’t-care look on his face. I had told the Lord I would pick up the next hiker, so without thinking I pulled over to the curb and asked him if I could give him a lift. There was something immediately charming about this polite and engaging twenty-something, so I invited him into our office and then decided to interview him for a job on the spot. This was my introduction to Craig Kinzer, eventually President of Seaberg Industries when I sold the company in 2006. In September of 1974 he was trying to become a house building contractor.

The author’s main reason for writing this story is to explain how a small manufacturing business succeeded in the late twentieth and early twenty-first centuries’ competitive world market. His research for this book came from the notes and diary he kept as he ventured through the launch and then growth of his small machining and fabricating company in the period from 1972 into 2006. The principles he used to start and operate a business are as pertinent today as when he first decided to become an entrepreneur.

He used the Bible extensively as a guide throughout his career. He also used the writings of eminent authorities in the business world, whose guidance he frequently referred to during his career.

If you are thinking of starting your own business, the author’s hope is that this book serves both as an inspiration and guide for you in pursuing your dream.

As a graduate engineer with post-graduate work towards an MBA, he was involved in management capacities for almost ten years before beginning his dream of starting and owning his own company in 1973. He started his business in the basement of his home as the only full-time employee and grew the firm to become a manufacturing company of 120 persons when he sold it in 2006.

His writing experience includes an article for Modern Castings, an article for the engineering school magazine, a story for a national building systems design magazine, and a monthly column for the Illinois Professional Engineer entitled Ecologic.

He was born and grew up in Moline, Illinois. He earned his way through the University of Iowa in the College of Engineering on a full basketball scholarship.

Presently, he lives with his wife of fifty years in Riverdale, Iowa, where they have lived for almost forty years. They have three married children and seven grandchildren.