Behold Now Behemoth: Dinosaurs All Over the Bible! 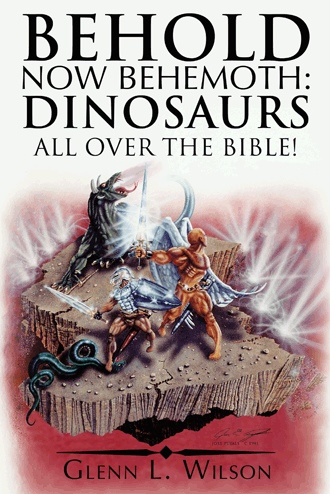 “Behold now behemoth! – which I made with thee!”  God is speaking to Job about this real creature.  This animal was made for an important purpose; not just to impress Job.

The creature being described by God: Is the chief, or greatest, of the ways of God!: He is the biggest thing God made that has ever lived on land.  The fossil record shows that animal would be a Brachiosaurus.
Behemoth has a large belly – strong legs – and a tail; but not just any tail!  “He moveth his tail like a cedar!” continues God.

God is talking to Job about an animal that Job is very familiar with; since neither Job or his friends got up and went anywhere; least of all to a swamp – for behemoth lives in the “covert of the reed and fens” – a swamp.  There is also no indication God transported the men millions of years back in time to see this critter - because there were no millions of years to go back to!  The millions of years idea is an un-provable religious doctrine of the evolutionist faith!

God is referring to a real creature that Job could identify by this basic description!  Yet Job did not have any museums with a skeleton of a Brachiosaurus.  It is preposterous to think that God is talking about a creature that exists only in a vision.  The most logical explanation is that Job would have seen a real, living behemoth to understand what God was saying to him!

The behemoth would also have had to be a very important creature in these ancient cultures to have impressed Job so much.  That is not possible if evolutionists are correct that man and dinosaurs never lived together.  Evolutionist religion – that the earth is billions of years old flies in the face of all real evidence that the earth is young earth {see Appendix II: The 95 Theses Proving Evolution is a Lie}.

Man living with dinosaurs like he does with cows and horses today is perfectly logical if creationists are correct that God made all the land animals on the same day He made man - as God claims in Job chapter forty.

Some say behemoth is an elephant or a hippopotamus.  This assertion cannot be correct for neither is the largest (chief) land animal.  The Brachiosaurus is the largest from the fossil record.  Neither elephants nor hippos have a tail like a cedar tree.  Also; in Hebrew – the word rendered in English as “moveth” means “to hold erect without bending” – the way sauropods are now depicted since someone pointed out that tail drag marks are never found with their fossilized footprints.

Before that point was made, dinosaurs were shown dragging their tails on the ground behind them – like on the old Sinclair gas station signs.  Now all dinosaurs are shown with tails held erect behind them – just as God said He made them.  Once again, modern, doubting men were wrong and God was right.

Have dinosaurs always lived with man? The Bible clearly shows the answer is yes! God created these great creatures and gave man dominion over them. Esau domesticated them. Nehemiah rode them. Ancient armies appear to have fought from them or along side them. People used them for labor and even ate them! Behemoth, Tanniyn, Yownah, Chamowr—the pages of the Bible in its original languages finally reveals the truth about dinosaurs and man  in some incredibly wonderful ways!

The lying doctrines of evolution claiming “billions of years” and “man never saw a dinosaur” are shown to be what they are—lies designed to deceive men into believing the Bible is not true. Men today see the bones of these creatures in museums and wonder, “If the Bible is true, why are there no dinosaurs found in its pages?”. After many centuries of the Bible existing in English, God gets the glory for His second-most magnificent creation next to man: the great dinosaurs!

Glenn L. Wilson has been involved in Bible research for more than twenty years. His primary research area has now been made into this book, which was peer reviewed by experts.

Glenn is an instructor of nuclear power technology with one of America’s most successful energy providing companies. He is the author of two other published books: Lumpy Oatmeal with Raisins and Cinnamon! and the political and religious novel The Write In (pen name Erik Aldon).

He makes his home in Columbia, South Carolina, where he lives with his wife of twenty-eight years and two daughters.