Memo From the Devil

Satan's Strategic Preparations For The End Of The Age 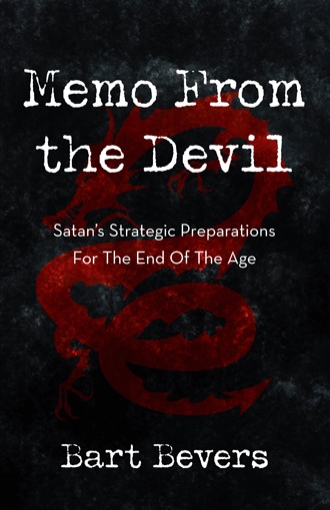 THE ORIGIN OF SIN IN HEAVEN:
Rebellion towards God began in heaven. In Ezekiel Chapter 28 the Bible uses two words to describe the “King of Tyre” (first “ruler” then “king”). The second Hebrew word melek is used in the passage to describe “king.” Ezekiel used the word sparingly. The only other time he used the word was in chapter 1 verse 2, when speaking of Israel’s monarch King Jehoiachin. The change from using the word “ruler” to using the word “king” is significant.
Ezekiel described this “king” in terms that could not apply to a man. First, this “king” appeared in the Garden of Eden, had been a guardian cherub, had free access to God’s holy mountain, and was sinless from the time he was created. Clearly Ezekiel was referring to Satan, the person behind the human king of Tyre. This was a dual reference to the human king of Tyre and the power behind him. Scripture supports this reference in other books of the Bible. Satan appeared in the Garden of Eden, according to the Bible his chief sin was pride, and he also had access to God’s presence.
Sin did not originate in the throne room of heaven instantaneously. There was a process that led to sin. It is that process that is described in detail in Ezekiel chapter 28. To fully understand what God refers to as “sin” we must analyze the process that led to its inception. This will provide us insight into how God evaluates the process of sin on human levels.
God described Satan as being created, beautiful, and perfect in beauty. Satan walked in the midst of the stones of fire. The Bible then says something incredibly important. The passage describes the specific activity in the process that led to the first sin. It describes what Satan was doing immediately prior to committing the first sin. The passage states, “By the abundance of your trade, you were internally filled with violence.” The Hebrew word translators used to describe “trade” is raka, which means ‘to go about from one to another’. It was Satan’s going about from one to another that led to his being internally being filled with violence.
Satan has continued this “going about from one to another” since the beginning. It is one of his trademarks because he still desires to be like God. In the book of Job God asked Satan from where he had come. Satan responded, “From roaming about on the earth and walking around on it." The Bible also describes his activity as, “prowling about like a roaring lion, seeking someone to devour.” He is constantly on the move. In the human criminal vernacular it is his modus operandi (MO). One of Satan’s distinguishing behavioral traits, is his “going about from one to another.”
According to God’s own words Satan was the most beautiful creature ever created because he was the only created being described in the Bible as being “perfect in beauty.” It is quite amusing that Satan is personified as a horned, red-tailed, pitchfork-bearing, impish figure. This is a far cry from God’s description. A couple of things that probably motivated Satan at the time was when he began to notice (1) he was not omniscient and omnipresent like God, and (2) how incredibly beautiful he was. If you are not omniscient and omnipresent like God (all-knowing and can be everywhere at once) what can you do to try and keep up? Answer--increase your activity. The likely reason why Satan was rushing around to and fro is quite simply he wanted to be like God. Satan decided he wanted to be like God and he wanted what God had. Some might say that he started to believe his own press. Satan may have walked about in heaven from one angelic being to another, while he heard compliments about his beauty and his privileges. He might have heard angels whispering about how they wish they were that beautiful. It’s possible that he heard one too many compliments. Satan obviously realized the only persons more beautiful than himself were--the Father, Son, and the Holy Spirit. The Trinity is one God revealed in three persons.
Sin is Satan’s goal. Sin is quite often the by-product of a series of decisions. These decisions are a process. Small decisions lead to larger decisions and the process builds upon itself until the series of wrong decisions produces the only thing disobedience can, quite simply sin. This violence turned into rebellion and Satan organized a coup d'état, which led to one-third of the angelic hosts being cast from heaven with him.

According to the Bible, the human heart is deceitful above all things (Jeremiah 17:9). Add to this formula the enemy, Satan, whom the Bible describes as a murderer from the beginning and as the father of lies (John 8:44). Introduce a body of Christ-following believers who often know very little about the Bible and even less about the 27 percent of the Bible containing prophecy, and you have a recipe for deception.

Fraud is an intentional deception or intentional misrepresentation made by someone with knowledge that the lie he or she just put forth will likely result in him or her receiving something of value. That something of value in the physical world is usually money or property. In the spiritual realm, your soul and eternal destiny are at stake. Fraud prevention (in both the physical and spiritual realms) requires familiarizing yourself with the fraud schemes being utilized and sometimes the red-flag indicators of those schemes. Nothing short of this knowledge will prepare you to stand against your enemy and the fraudulent schemes he employs (Ephesians 6:11).

Memo from the Devil is a nonfiction work that contains a ten-part fictional memorandum written in the first person as though Satan is speaking to his demonic forces. The book is designed to expose some of the fraud that is being perpetrated against the human race. The Bible does not say the truth will set you free; it says that you shall know the truth and that the truth will then set you free (John 8:31).

Bart Bevers is a lawyer in Texas. Mr. Bevers is the former Inspector General at the Office of Inspector General (OIG) in Texas, where he ran the largest state OIG in the nation. He served seven years at the OIG and nine years as an assistant district attorney. He has specialized in fraud and white-collar crime. As the chief prosecutor in five different courts and a civil litigator, Mr. Bevers has personally tried over 450 contested trials in criminal and civil courts.

Mr. Bevers was the recipient of the 2009 Public Administrator of the Year award in Texas by the American Society for Public Administration (ASPA) and was nationally recognized with the 2008 Sentinel Award by the Association of Certified Fraud Specialists in San Francisco, California.

Mr. Bevers became a Christ follower over thirty-eight years ago at age nine. He has been married to his best friend for sixteen years and has two children, a son and a daughter. He is an avid golfer and enjoys running—even in the Texas heat.