Frogs In The Loo

And Other Short-Term Missions Tales 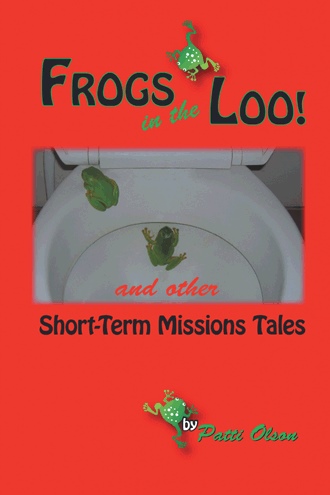 It was late at night, and the car’s headlights were just barely able to light up the road as we drove through the darkness of the farmland outside Santa Cruz, Bolivia. The roads were treacherous enough in the daytime as they are narrow, not painted to indicate lanes or shoulders, and pocked with deep, wide potholes. It was normal to see a car ahead of us weaving like a drunk driver, but he would only be trying to avoid the deepest holes in the pavement. But at night, there was the added danger of pedestrians in dark clothing, stray farm animals, unlighted bicyclists trying to get home after a long day at work, and horse carts plodding in the roadway, also without lights.

We were wary and taking it slow when an impatient driver careened around us, speeding ahead. Good, we thought; he can light the way ahead of us and make our drive safer. But he was traveling faster than us, and the gap between us lengthened. Then all of a sudden, we saw his red taillights swap for headlights, back to taillights, then headlights, then, whomp, his car skidded into the ditch on the wrong side of the road. We quickly slowed down, and as we neared him, crept onto the right-hand shoulder while asking each other what on earth was going on!

It’s good we pulled onto the shoulder, as right in the middle of the road were two huge black humps several feet tall and blocking the entire roadway. Dave turned on the four-way flashers and got out to investigate the roadblock and to check on the driver and passenger of the other car. The black blobs turned out to be two large and very dead cows left right in the road where they had been hit, most likely by the large tractor-trailer trucks that travel regularly between Santa Cruz and their supply houses in Brazil. This narrow, dangerous road was the main transcontinental highway that linked Bolivia to Brazil.

Dave ran across the road to the car stuck in the ditch and was relieved to see two men getting out of their car. Our Spanish was extremely limited, but he was able to tell that they were uninjured. By that time, other vehicles were approaching the accident scene, and other Bolivians were offering their help to pull the car out of the ditch. Some had flares that they lit to warn other drivers of the road block. We knew it would probably be morning before a farmer could come with a tractor to move the carcasses and there was little further help we could offer, so we continued on our way home, vowing not to try this drive again so late at night!

The next day, I received an e-mail from my friend many miles away in Washington State telling me that she’d felt prompted to pray for us the previous day and hoped all was well with us. When I worked out the time difference, she was praying for us at the exact time that we could have hit those cows blocking the highway! Wherever we travel in the world on missions projects, we ask people to pray for our safety and health, and this is why. And when we return home, we tell those who have prayed for us how effective their prayers are and encourage them to keep praying for us.

“...I will keep on being glad, because I know that your prayers and the help that comes from the Spirit of Christ Jesus will keep me safe.” (Philippians 1:18-19 CEV)

From a daily commute through Seattle rush-hour traffic to equatorial jungles, the Olsons experienced a radical change in lifestyle when they answered a call to serve God in Christian radio. Their travels over a nine-year period brought challenging and joyful experiences in cross-cultural living in the twenty-first century. Their stories range from compassionate to humorous as they relate their extraordinary adventures.

Travel along with the Olsons as they move from country to country across five continents. Author Patti Olson captured the sights, sounds, and emotions of new discoveries as they experienced them, allowing her to recount them in rich detail in Frogs in the Loo and Other Short-Term Missions Tales.

Patti Olson is a freelance writer, teacher, and radio broadcaster. Her passion for writing and broadcasting began with her studies at the University of Alaska–Fairbanks. To help finance her education, she worked as an all-night DJ at a radio station. She completed her bachelor's and master's degrees in education and spent the majority of her career working as an office administrator for engineering firms. For three years she produced and recorded a weekly Christian radio program for children. From 2002 until 2010, she and her husband, Dave, served as missionaries in Christian radio in nine countries. That experience was the inspiration for this book.

Patti and her husband, Dave, live in Lancaster, Pennsylvania, and have two grown, married children and four grandchildren. Patti copyedits two Christian periodicals and teaches a weekly women's Bible study at her church.