The Adventures of Trapper Jake 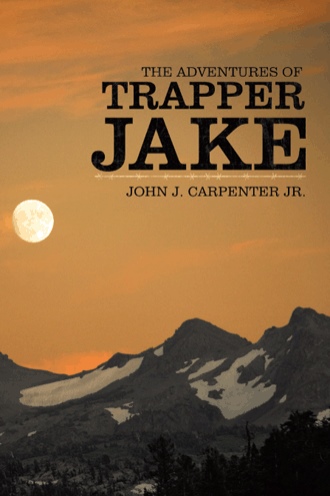 That night the fire was roaring as the two men reflected on what had just happened. The friends had never talked about each others faith before. It was at this time that Jake asked his friend if he believed in God. Jasper answered "how can anyone deny the existence of an all-powerful God," "Just look at all the beauty and majesty we live in, how could that not have been created by God." Jake agreed, and then he shared about when he lived in Philadelphia. He said" all his life he went to a Presbyterian Church, He learned how God sent his only son Jesus to save mankind from his sins, and that through him a person could have eternal life." The cabin was invaluable to the men.They spent months living in a small tent. There were many nights when the men were woken by howling wolves and growling bears.They looked forward to sleeping in the cabin, knowing that they would be safe from any wild animals. The tents were also cold. They enjoyed the warmth they had living indoors. Cooking on the fireplace was so much nicer. They rarely burned meals, because they could regulate the heat.They were now enjoying the fruits of their labors. The men had finished checking their traps and gathering the animals they had caught. They were walking back to their cabin. Suddenly they heard a lot of noise coming from the other side of the mountain they were on. The sound of gunfire and a lot of chanting coming from Native Americans caused them to want to see what was going on. They did not know how many men they would encounter, so the two men cautiously made their way to the noise. It was almost dark when they came upon a party of Cheyenne Braves harassing a young native woman. There were six men in this group and the two friends knew this woman`s life was in danger. Jake and Jasper set their sites of their rifles on two braves and fired. The church wouldn't` have a pastor. Each week someone from the congregation would preach a sermon. The whole body was made up of both tribes people and settlers.God was moving in a powerful way in this church. Every Sunday after the sermon they would have a large meal together. God brought love where fear and hate had been before. Jasper asked Jake how Mike got his nickname maniac Mike. He seemed quite harmless when they were there. Jasper said Mike was known to fight and kill large grizzly bears when he was younger. He did this with nothing more than a large knife. Mike would charge the bear with a knife in his hand chanting like an Apache warrior yea ya yea ya. The bear would stand and Mike would slam into it`s chest. before the bear could collapse its teeth and claws into the man, Mike would hurl the knife into the beasts heart.This killed the massive creature instantly. Mike got quite a reputation for this. Most mountain men thought he was weak in the head. Jasper and Mike had a run-in when Mike would put skunks into his traps.He did this when they were both trapping in the same areas. Skunks are very smelly creatures and getting them out of your traps is is a stinky ordeal. The horse that Jake was riding on wasn`t as fast as the wild horse. This made it hard for Jake to get close enough to rope the elusive stallion. They were coming around a grove of trees, and the stallion had disappeared. Suddenly out of the trees leaped the gray stallion. He was immediately on Jake and his horse. Jake felt excruciating pain as the stallion bore it`s teeth into his upper thigh. The blood gushed from the bite wound, but Jake instinctively reached for his rope. He tossed it around the massive stallions head.

The Adventures of Trapper Jake is a story of a man`s life. It details his life beginning in Philadelphia,Pennsylvania, and the adventures he has becoming a mountain man in Montana . It has adventure, action, love, and every emotion a man could feel. It is a metamorphosis of a man's life. Jacob Morrison is an honorable man with a pure heart for God. His adventure includes the life of a friend Jasper Cummings. They share many memorable experiences as they live out the life of mountain men in the mid 1800`s. Their life`s work is trapping, and they also mine and pan for gold. They meet many people and have a lot of different experiences with them. The story will seek to captivate you from the beginning to the end. A friend Pastor Stan Simmons of Faith Chapel in Billings Montana said "I read your book on the way to L. A. today. Quite an adventure. I bet you had a wonderful time writing it. It kept my attention all the way through."

This is an adventure from the beginning to the end, aimed at audiences from fifth grade to adult. I have found students from fifth grade on up enjoy it, as well as adults like my friend Pastor Stan. If you like to read about adventure this is for you. The story starts in Philadelphia and ends in Montana with many adventures through out the Americas. You learn of loyalty and honor as well as what it means to be self sacrificingal. They protagonists, two men who are trappers, miners, and mountain, men, are tremendous examples of purity and devotion. This is all done by two men of simple means. I think everyone who reads this will leave with a feeling of satisfaction. Their story will touch your heart. That what they just read touched many areas of their heart ,and they leave with a good feeling after finishing it.

John Carpenter moved to Montana in 1973 to attend college. He married his high school sweetheart, Meg Moorhouse, in 1974 and has lived in Billings, Montana, with her and his four grown children and five grandchildren .Carpenter always felt he was born 150 years too late, as he has always had a love for the outdoors and especially the Beartooth mountains.