Live by the Sword

Israel's Struggle for Existence in the Holy Land 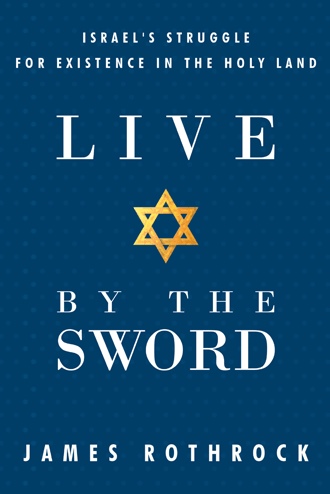 Chapter 1 If the Arabs put down their weapons today, there would be no violence. If the Jews put down their weapons today, there would be no more Israel. —Benjamin Netanyahu Dawn of a Jewish State Moshe Dayan, former Israeli Minister of Defense, once remarked that his generation had been condemned to live by the sword for the foreseeable future.1 The history of Israel since its founding in 1948 has been marked by one armed conflict after another with the Arabs. This has made living by the sword the way of life for the Israeli people. The late Prime Minister of Israel, Yitzhak Rabin, commented, “Even when it was not engaged in outright combat with the Arab enemies, Israel remained in . . . a ‘dormant war’ that, ‘like a volcano,’ could erupt with little warning into a major conflagration.” Chapter 13 Dangers on the Horizon Danger is nothing new to the people of Israel. Most have lived with it throughout their lives. The dangers were not always the same; for example, the threat of large armies invading Israel’s homeland is not as likely today as it was in the past. However, there are dangers that Israel faces today and in the near future that pose a serious threat to its existence. Iran’s quest for nuclear weapons is the greatest threat to Israel’s survival. In an interview on March 23, 2011, direct from Jerusalem on Israeli Television Channel 2 News, Israel’s Prime Minister, Benjamin Netanyahu, made these comments to a question about the biggest problem facing Israel: “The greatest mission we have is to prevent a militant Islamic regime from meeting up with nuclear weapons, and nuclear weapons from meeting up with a militant Islamic regime.” He added that the first comment related to Iran and the second referred to Pakistan, with its stockpile of nuclear weapons, being taken over by a militant Islamic group like the Taliban. He emphasized that we have to stop them from getting nuclear weapons, and this was the greatest mission for this and the next generation. Countdown to the Bomb. The main issue about Iran’s nuclear program is not if, but when, the development of a nuclear bomb will be completed. Among major Western military and intelligence agencies, there is little doubt that Iran has been pursuing a nuclear weapons program for a number of years. Iran still denies the existence of any nuclear program other than for peaceful purposes. If this were true, why has Iran gone to such lengths to keep secret most aspects of its nuclear program? Why do the Iranians refuse to fully disclose their activities to the UN International Atomic Energy Agency (IAEA)? It is obvious that Iran has much to hide. Experts have differing opinions about when Iran will be able to build its first nuclear bomb.

Live by the Sword portrays Israel’s struggle for existence in the Holy Land since becoming an independent Jewish state in 1948. Lieutenant Colonel James Rothrock draws on his military experience, travels in the Middle East, and academic background to present an authentic picture of the Jewish people’s quest for a home in Palestine, their fight for survival against multiple Arab invasions, the hundreds of indiscriminate terrorist attacks, and the ominous threats to their very existence today.

Colonel Rothrock identifies the immediate threat to Israel’s survival as the “Alliance of Terror,” which consists of Iran and Syria and their terrorist surrogates, Hamas and Hezbollah. These purveyors of terror all have the common goal of destroying Israel.

However, Rothrock warns that the greatest danger to Israel’s existence is Iran’s quest for nuclear weapons, coupled with the threats by Iran’s leaders to annihilate Israel. He makes a convincing argument that Iran’s nuclear ambitions are propelling the region toward a cataclysmic conflagration that could involve Israel, Iran, Arab states, and even major world powers.

Colonel Rothrock is steadfast in his belief that the United States must stand resolutely with Israel and take action to forestall military or political events that could lead to the destruction of our only true ally in the Middle East.

As a career U.S. military officer, Lt. Colonel James Rothrock followed Israel’s major military engagements with the Arab world and its day-to-day fight to protect the people of Israel from indiscriminate terrorist attacks.

He has traveled to many parts of the world, including the Middle East, South Asia, Far East, Pacific, and Europe. He served eleven years abroad with assignments in Athens, Paris, Tokyo, Saigon, and Stuttgart. These travels were valuable in his former civilian profession as a professor of world geography.

He holds BA and MS degrees. His professional military education includes Air War College, Air Command and Staff College, and National Security Management at the Industrial College of the Armed Forces. His military specialty includes electronic warfare, intelligence, foreign military advisor, information systems, and launch control of nuclear weapons. For a time, he also served as a special instigator for the US government.

His combat experience consists of a year in Vietnam, where he saw a major allied victory in the 1968 Tet Offensive turned into a defeat by the American media. In the early stages of U.S. involvement in Vietnam, he served on an aircrew that flew covert support missions.