Jackie and the Preacher 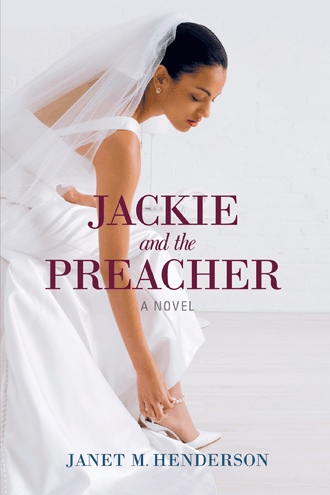 "We took in over two million dollars tonight," she said. It had taken them over an hour to count it all, and it had been placed in an overnight deposit

." "You can say that again." Jackie thought of the once-sick child and was flushed with happiness. "You look very beautiful," he said for the fourth or fifth time. "Your hair is especially lovely." "You like it," she asked, immeditately reaching up to touch it, glad it was still in place. "I've always liked your hair, but tonight it is extra lovely." "Selena's former hairdresser did a good job. We prayed for her, remember?" "Yes, I remember." He was standing very close to her, making it difficult for her to breathe, let alone carry on an intelligent conversation. "I want to thank you for being my wife tonight. It wasn't so bad, was it? You didn't have to cook for me or do my laundry." They both laughed. "No, it wasn't bad at all." Being with him had been like a fairy tale, like being Cinderella at the ball dancing with the handsome prince. She wondered if he would ask to see her again. Malcolm smiled, took her hand and kissed her knuckles. "That's good. Can we try it again some time in a different environment?" Could he date her? Was that what he was asking? When he moved closer, she closed her eyes as he took her face in his hands. "Jackie," he whispered, "can I see you again?" "Yes," she answered in a shaky voice. His face was just inches away. He stared at her intently. He's going to kiss me again, she thought. Just as she offered up her lips, his mouth came down on hers to prove she was correct. As he pulled her closer into his arms, she realized the evening had been an unequivocal success as far as she was concerned. She also realized that she was totally and completely in love with him. There was not point in denying it, and there was no going back. She was past the point of no return.

Jacquelyn Taylor, a freelance writer from Chicago, joins the House of Prayer Church in Harlem to write an expose` on the youth pastor. Though the New York Times calls Dr. Malcolm Irving “God’s hope for America’s troubled youth,” Real Life magazine wants to know if he preaches the gospel or promotes his own agenda.

Jackie doesn’t care one way or the other. A former call girl, fleeing an escort service, she feels the story about the preacher will hide her past, get her a promotion at the magazine, or a byline at the Times. She doesn’t know it will change her life.

When she meets Malcolm, there is an instant attraction. He is handsome, single, magnetic, and persistent. Can he help her with a missing brother, a murdered client, and an angry pimp who stalks her, eager for revenge?

has an unusual gift and can help more than Jackie realizes. He also has secrets that would shock the church. A lethally attractive, eloquent speaker, hounded by the media and in demand all over the world, he wants a wife more than anything else, and Jackie, with her provocative questions and guilty secrets, appeals to him at first sight. Could she be the woman for him? How can he get her to trust him? While ministering to gangsters, the homeless, and the bereaved, he sees the trouble ahead. Can he protect her from danger too? Set in Chicago, New York, Toronto, Pennsylvania, and Rio de Janeiro, and Europe, this heartwarming tale of a phenomenal preacher who falls for a “fallen” woman will delight you and inspire you from start to finish. Jackie and the Preacher is not like any novel you’ve read before. The characters are real and so is the message.

Janet M. Henderson teaches English in the City Colleges of Chicago and writes for helium. com. Her previous novels, Lunch With Cassie and The Assassin Who Loved Her both received excellent reviews. She is the daughter of an ex marine and ordained minister. She lives in Chicago.