From Manger to Manhood 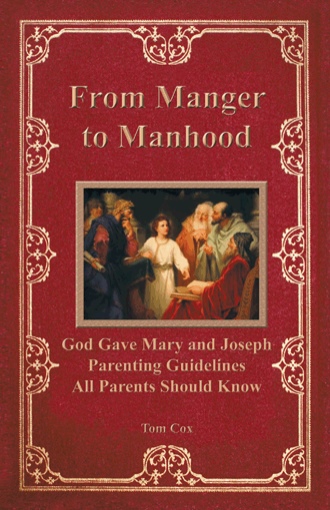 The first objective of this book is to invite the reader to consider that Jesus needed to be raised by human parents to complete His preparation to become the fully acceptable sacrificial lamb for the sins of all mankind.

The second is to learn why God chose Joseph and Mary. (And why He has chosen you.)

The third, and most important objective, is to learn how to cause your own children to increase and achieve success in the four foundational characteristics desired by God for His own Son and all our children.

I have “been around the block” attending Christ-centered churches most of my life, but through all of that, I have never found any teaching or training for parents and potential parents which addressed how Jesus, Himself, was raised. Why? Because most Christians (including me, until recently) believe Jesus was completely equipped and ready in every aspect of His mission to save humanity from their sins the moment He arrived as an infant. However, I am convinced that God chose to use human parents, Joseph and Mary, to “raise” His Son, because He needed Jesus to become properly human. The Godhead (The Father, Son and Holy Spirit) knew that, in order for there to be the once-and-for-all-time sacrifice for sin, that the sinless Blood Sacrificial Lamb must be not only the Creator, Himself, but a sinless, “Complete” human. God chose both Mary and Joseph and trusted them with the human upbringing of His Incarnate Son. A perfect Human sacrifice must pay the ultimate price for human sin.

I believe Jesus surrendered His Omniscience and Omnipotence temporarily, before He left Heaven, just as He gave up His Omnipresence and other God-attributes in order to become truly human with all its attributes and temptations’ tests.

If you can accept the premise that He became exactly like us without the fore-knowledge of “humanness," you can see why God gave human parents to raise Him. Since this revelation, I have come across once-puzzling passages, which now make sense. For example, when asked by His disciples when the end times would come, Jesus answered: “but of that day and hour, no one knows, no, not even the angels of Heaven, but, My Father only.” (Matthew 24:36) Surely, Jesus, the second member of the Trinity/Godhead knew the timing determined from the beginning. But Jesus, the human, had given up that knowledge to become one of us.

It follows then, that God gave Mary and Joseph knowledge of what He wanted for His Son to learn and to become. Then, doesn’t it also follow that our God would see to it that we knew and should use what they knew to raise our children? I believe this book will reveal the beginnings of that knowledge and give us guidance to raising our children as Jesus was raised.

My prayer: May your eyes, mind and heart be opened to God’s straightforward plan for raising your children to Him, and may God give you exceptional determination with physical, mental and spiritual strength to follow it, so that, finally, you will receive the reward: your children loving and serving God the Father.

Did God give Mary and Joseph a plan for raising Jesus? Can we find and follow the same plan? Will it make a big difference?

The Answer to all the above is a huge “es!” Come explore new evidence of Jesus' upbringing that will inspire you to follow God’s blueprint to raise your children as Jesus was raised. Author Tom Cox reveals to us God’s parenting guidelines for Jesus and our children today:

• A must-have handbook for new parents, grandparents, and caretakers

• A “weapon of faith” for when you encounter skeptics

Tom Cox Sr. accepted Jesus Christ as his Savior at the age of seventeen. He worked his way through college, earned his BA from Georgia State University, served as lead guitar player, singer and witness for Campus Crusade for Christ’s Music Ministry, “The New Folk,” before being called to active duty by the US Navy.

He studies biblical and other languages; he is an award-winning, nationally published writer and author; musician; Sunday school teacher and an energetic speaker, often incorporating humor.

Tom has said: “I believe this book is the most important thing God has allowed me to do. I pray He will use it to better equip parents, grandparents and all those who help raise children to ‘train them up’ as Jesus was raised.”

Tom, his wife, Denise and their son, Ty, live in the Appalachian Mountains.