Vignettes Of A Wonderful Life!

The Amalgamated Autobiographies Of Mary Maxine And Ralph Thomas Palmer 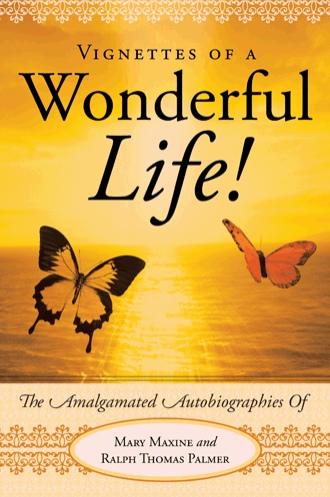 We Begin Life in Our Garage Home:
In September, 1953 we finally were able to move to Honjo. We
arrived by train. The population of Honjo was about 30,000. In
crowded Japan it was considered a town, not a city. Honjo was
clustered on flat fields along a wide, shallow river about a mile
east of the Sea of Japan. A group of picturesque mountains loomed a
few miles to the east. The most dominant, Mount Chokai, although
not as symmetrical as Mount Fuji, was fully as beautiful.

We loaded our hands and arms with suitcases and walked the half to
three-quarters of a mile from the train station to the property
where a house was to be built for us. From the moment we left the
station, we had a large following of curious Japanese people. They
stayed behind us but accompanied us all the way to our new home.
Americans were a rarity in that part of the country.

While waiting for the house to be constructed, our new home was a
garage. It was made for a jeep we might have someday. It sat back
from the road about 30'. The driveway was unpaved. As soon as it
rained it became a muddy quagmire. The inside measurements were
about 7' wide and 15' long, so it was very small. It had a garage
door at the street end and a regular door on the side near that
end. A sink and drain board covered with sheet metal crossed the
other end. It had a cold water faucet. The sink drained out onto
the ground behind the garage. Some high windows lined the sides.
Behind the garage we had had an outdoor toilet made of wood. Later,
I put up a small chicken house and pens behind that.

When our few items of furniture arrived I made a frame out of the
packing crates. Mary Maxine covered it with sheets to create a
closet. So, entering from the small, side door one immediately
faced this closet. Between it and the door was a space about four
feet square in which sat our only chair. To the left was our bed
with about a 10" walking space at its foot between the bed and the
wall. Later, we installed a kerosene stove with an oven in the
space between the bed and the drain board. It was quite crowded.

Sumi versus Tsumi:
We had a shichirin (shee-chee-reen) for Mary Maxine to cook on
until much later when we bought the stove. A shichirin is about
the size and shape of the medium sized clay flowerpots we have in
America. As it is used for cooking with charcoal, there is a hole
on one side for draft. Because of the possibility of carbon
monoxide poisoning, Mary Maxine had to cook our food outside.

When Mary Maxine was ready to cook our first meal in Honjo, I piled
a Boy Scout heap of paper and wooden scraps in the shichirin on
which I carefully placed some charcoal. I tried to light it. There
was, of course, no such item as charcoal lighter fluid available.
I couldn't get the charcoal to light. I tried again, several times.
I blew on it and fanned it and blew on it some more. But, I could
not get a fire going. It was frustrating. It also was
embarrassing. We were being watched. The teen-aged daughter of one
of our neighbors was standing at the edge of her yard some distance
away. Careful not to be obtrusive, she was watching the antics of
these strange foreigners. As charcoal was used by all the Japanese
both for cooking and heat in their homes, there was little doubt but
that she knew all the tricks of starting a fire in a shichirin . I
felt like an ignorant dolt.

Mary Maxine took over the fanning when I tired. While she stood
there outside the garage door flapping at the hole of the shichirin
with a fan hoping to ignite the fire a man walked up the driveway
pushing his bicycle. He introduced himself as Mr. Eizo Oda, a local
banker. Thinking all Americans were wealthy, he hoped we would put
our money in his bank. He didn't know how small a missionary's
salary was.

"You are using 'hard charcoal'," Mr. Oda exclaimed when he saw the
struggle we were having. "It is too hard for starting a fire. "You
need 'soft charcoal' to start your fire." He beckoned to the
neighbor girl standing near her house next door.

"Go get some soft charcoal for these people so they can start their
fire," he urged. The girl was a kind young lady. She obediently
went off to get the charcoal. The two of them showed us how to
start the fire.

We thanked Mr. Oda and the neighbor girl for their help and for the
sumi (soo-mee, charcoal) they had provided for us. The custom in
Japan was to thank a person for giving you something and also to thank
that person again the next time you see them. So, I thanked Mr. Oda
the next time he came to visit us.

Vignettes of a Wonderful Life is a true love story of the fascinating and exciting lifetimes of two Christians in love with each other and with God. It provides brief and often funny glimpses of the Palmers’ lives from adventures as children in the 1920s—involving rattlesnakes, bears, and pumas—to our present space age. It includes their romance and marriage, plus wryly humorous and profoundly difficult times during the Great Depression, military service in World War II, and mission work among Native Americans and Chinese immigrants, as well as time spent as overseas missionaries on the island of Jamaica and in Japan. Their stories include service as educators, speakers, pastoral ministers, executives in higher education, in regional work, and in the Disciples Mission Board.

Married in 1948, Mary Maxine and Ralph Thomas Palmer are bothordained ministers in the Christian Church (Disciples of Christ).  Mary Maxine (BA, MA) and Ralph (BA, MDiv, MS, and DMin) have served challenging and exciting lifetimes in ministry and education and as overseas missionaries. Blessed with two daughters, they reside in Fort Worth, Texas, where  Mary Maxine continues in ministry and Ralph in writing.