In the Shade of a Shadow of Reason

a Vlee of Twin Willows novel 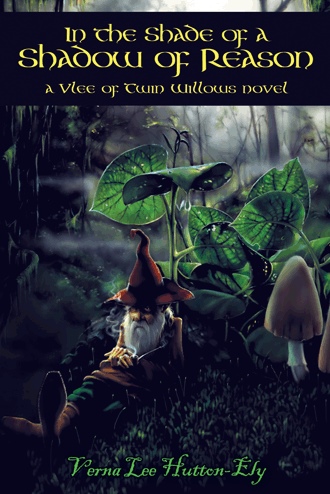 Lucy watched from the front window as the deputy drove off, and then she turned and hurried into the kitchen. She had a sick feeling growing inside her. She opened the back door and peered into the garden. Her eyes confirmed what her heart most feared: Lance wasn’t there. She stepped out into the chill of the night. Though her robe was warm and thick, her hair was still damp from her shower, and she shivered as the breeze danced around her. She took a long, deep breath. But when she exhaled, it left her body in short, broken spurts of silent sobs. The river that flowed just beyond the garden was a wide, black ribbon dotted with small orbs of light that traveled billions of miles to dance on its surface. She walked slowly toward the bank. She heard the rush of the water as it hurried past the rocks that hadn’t been totally swallowed up by the river’s rise after the winter snowmelt. They jutted up here and there along the bank, giving a voice to the waters that would have otherwise moved along in silence. Tonight the river’s words taunted her. Her mind was tired and her heart felt so heavy that she fell to her knees in the thick, damp grass that carpeted the flat land before it yielded to the power of the watercourse. As the wind ushered in heavy clouds to veil the stars, the dancing orbs blinked out one by one until only one or two survived faintly on the surface of the river. Across the river now Lucy saw black figures. They were darker than the night itself, and they were beckoning to her. She had seen them before. They were the captains of despair, and her heart had been shredded many times by their daggers. She knew what they wanted; they wanted her. The voice she hated disguised its vileness by offering her comfort: “There is rest in the black water. It will carry you to a place beyond all pain.” She rose to her feet and inched forward, stopping for one last breath before giving herself to the promise of the bourn. The wind blew against her, and the cloud that had been hiding the moonlight gave way to the crescent she had given to Lance just one evening before. It shined on the surface from directly over her head, dispersing the utter blackness. Its reflection penetrated her eyes and carried an elixir to her troubled mind. She raised her head to behold it. The wraiths left the far bank as if threatened by an approaching danger. Lucy turned away from the bank to make her way back to the garden. As she did, Lance stood before her. The moon was back in his eyes, and she rushed into his arms. The kiss they made was one of fairytales. It was a kiss that could have awakened a princess who had slept for a hundred years. It was a kiss that could have turned a cursed frog into a prince. It was a kiss that would seal their fate one to another until the end of all time.

Lucy Cavanagh has experienced periods of missing time since her childhood. They have estranged her from her friends and family, who are unable to cope with things out of the ordinary and who refuse to believe her explanations that she does not know what is happening to her. Once she shares her secret, even the people in the Christian churches she has attended end up judging her as insane, or worse, demon-possessed.

It is not until she finds herself in a meadow totally unaware of how she has gotten there—and comes face to face with a handsome stranger who claims to believe her—that she finds the love and acceptance she has been longing for. But this man has secrets of his own, secrets that she is unwilling to believe.

Can love conquer disbelief? A mixture of fate and fantasy pushes the boundaries of Lucy’s faith … until she questions her own sanity.

Verna Lee Hutton-Ely was born an identical twin and raised at Twin Willows, a small blueberry farm in southwestern Michigan owned by her parents. Despite holding many fond memories of her beloved woods around Spicebush Creek, she developed wanderlust. She was drawn to the San Francisco Bay area and arrived with flowers in her hair to experience the New Vibration of the Peace and Love Movement. Still a proponent, she has traveled extensively across the United States and to other parts of the world, seeking sacred places of power and enlightenment. She currently resides in Oak Park, Michigan.

This is her first novel.