Secret of the Laurel Crown 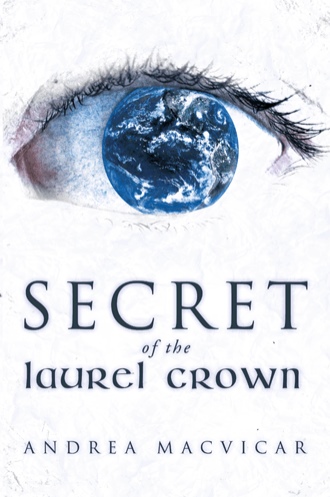 Carolyn swung her sword as hard as she could, striking it against his side, putting a dent in his armor. She felt the wind whistle past her cheek as his blade barely missed her, hitting her shield. But it did not penetrate. She darted left, right, striking him with a force she knew was not her own. Over and over she whacked at him with the flat of her blade; she swung, hacking at his armor with the sharp edges of her sword. She hit him everywhere she could---on the legs, on the thighs, at the waist.
Her size, her speed, her lack of heavy armor had a distinct advantage. She was light and fast. He was big and slow. Dodging, darting around him, she kept hitting him, hacking away until a dent opened into a large hole in his right thigh. She plunged her sword into it up to its hilt and twisted. She felt the blade go into nothing. The leg was hollow. She pulled the sword out of the hole.
From above, she saw his metal fingers coming at her like a giant claw. It clamped around her shield and chest piece. His glove squeezed. Her chest armor began to creak. He threw down his sword and with both gloves squeezed. Her armor began to buckle. She looked into his eye slits. Blackness.
Her chest piece and shield began to crush her ribs. Her lungs screamed in pain. Desperate, she thrust her sword into his left eye slit. And lifted.
The visor flipped up. And the sword was wrenched out of her hand. It sailed over his helmet and dropped somewhere in the bushes.
Her brain began to mist over from lack of oxygen. Jimmy's face swam before her. She groaned and touched the Crown. I've done everything I can.

<p>The note on the old shoebox read: “Carolyn, I bought this at a garage sale. I know how tough life has been for you these past months. I thought this might help a sad girl smile. Love, Gram.” Carolyn lifted the lid and dumped its contents. Five hundred pieces of the jigsaw puzzle tumbled out onto the worn yellow wool blanket. As she pushed the pieces aside, a folded parchment—its edges ragged with age—caught in a small hole. </p> <p>Picking it up carefully so as not to tear the creases, she unfolded it and read the words in faded black, handwritten script: “he agape nikai panta. The Laurel Crown shall choose the wearer. Be warned. Beware of the Baal Contract.” </p> <p>Was the secret message about the puzzle? Maybe the message had nothing to do with the puzzle. Somebody from a foreign country could've put it into the box later on. But why? And who? In seeking answers to those questions, Carolyn and her brother Jimmy's adventures begin on the planet of Double Suns. </p>

Andrea McVicar holds a doctorate from Kingsway Christian College and Theological Seminary and is a member of the American Association of Christian Counselors. She is also the author of Tales of Zoftic—the story of a black Labrador. She resides with her husband Mack, and Princess, their rescued greyhound in Coral Springs, Florida.