When I Am Weak, Then I Am Strong 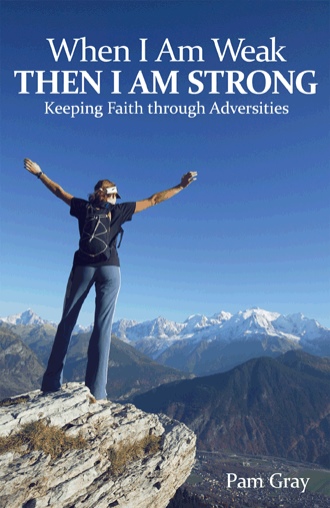 The Game of Life

In August of 1973, I left my home in Indiana for a Young Life camp in Colorado called the Frontier Ranch. It was the summer prior to my senior year in high school. I was a happy, healthy teenage girl, anticipating the time of my life with other campers who shared my faith in God. Little did I know that when I returned home, my life would be changed forever, and I would face the challenge of adjusting to a whole new way of participating in life.

Frontier Ranch was situated in a breathtakingly beautiful part of Colorado. Surrounded by mountains, the camp offered crisp, invigorating air; gorgeous scenery; and a chance for Christian teenagers to be themselves as they enjoyed each day’s exciting schedule. We participated in the usual camp activities of swimming, horseback riding, challenge races, and campfires. On our last full day at Frontier Ranch, we were going to climb Mt. Princeton. I was excited! Scaling a mountainside was something I had never done. After all, there are no mountains in Indiana.

We met with the guides to receive our instructions on how to prepare for the climb. We were to wear shoes or boots that had good grip, long pants, and jackets tied around our waists. There was a possibility of snow at the higher elevations, and it could get rather chilly, even in August.

I was ready. Nothing would do but to climb all the way to the top; besides, there would be a Rocky Mountain High trophy awarded to a camper that night after our return. At the beginning of our climb, I was at the front of the pack. I kept a pretty fair pace for the first half hour or so before I slowed down. Soon, others climbed past me. I stopped to rest. Why I was having so much trouble? I’d always been active in sports. This didn’t make sense. My legs began to ache, and it became increasingly difficult to breathe. I’d always heard that the air was thinner in higher elevations, but I never imagined it would be like this.

Eventually, my legs buckled, and I fell down. I was embarrassed, but I wasn’t going to let it stop me. I struggled to get up and continue the climb. I had a goal to reach! Wanting to resume my position near the front of the group, I picked up the pace, but I’d only climbed another ten feet or so when my legs collapsed again. Even though I kept trying, my legs weren’t strong enough to support me. Each step got harder. One of my fellow campers asked if I wanted her to notify the nurse who’d accompanied us on our hike, but I said no.

I wasn’t quite sure why all of this was happening to me. No one else seemed to be having any trouble. I didn’t want anything to keep me from reaching the top of the mountain. Several guys who were about to climb past me asked if they could help. When I told them what was happening to me and my goal, they took turns carrying me on their backs as they crawled up the side of the mountain. In spite of their help, my condition continued to deteriorate. My breathing became labored, and I could no longer keep my eyelids open. It was an effort to speak. I was fading fast.

The higher the altitude was, the colder it got. The boys put a jacket around my shoulders to keep me warm. They asked if I wanted to quit, but I wasn’t about to quit. They assured me that they would see that I reached the summit. And then I lost consciousness.

The next thing I remember was the nurse calling out my name and asking if I could hear her. When I opened my eyes, I realized I’d made it to the top. I didn’t know if I was dreaming or if I actually had reached the top of Mt. Princeton, but the other campers kept telling me to hang in there—that I had reached my goal.

It was an absolutely amazing and beautiful sight! I’d never seen anything so magnificent. The skies were blue, there was snow on the ground, and I could see other surrounding mountain peaks. It was even more spectacular than I had imagined. I breathed a sigh of relief as a true sense of peace and accomplishment came over me. Then I drifted back into unconsciousness.

The nurse sent someone down the mountain to get help. I’m not sure how much time elapsed, but I woke up once again to the realization that I was strapped to a blanket-covered stretcher being carried down the mountain by several paramedics. They kept slipping and sliding as we made the downward trek. Once we arrived back at the ranch, the men laid me on a cot in the nurse’s clinic. By this time, my breathing was stable, and I stayed conscious. I asked the nurse what was wrong with me. She didn’t know. She told me get some rest. I just laid there until I fell asleep.

Later that evening, I woke to the sound of clapping coming from the mess hall. The nurse told me they’d just announced that I was doing much better. The camp staff had chosen me to receive the Rocky Mountain High trophy because of my determination to make it to the top of Mt. Princeton.

I was ecstatic to hear that I’d won the award, but so tired that I just wanted to go back to sleep. While I rested, my cabin counselor had a fellow bunkmate pack my bags for the trip home to Indianapolis the next morning. The nurse suggested that I make an appointment to see my doctor as soon as I arrived home.

The next day, we said goodbye to all of our new friends and workers at the ranch. The campers exchanged addresses with each other so we could stay in touch. We loaded the bus for the long ride home. By then, I had a sore throat, and I felt like I was running a low-grade fever. I slept for most of the ride home, thinking I was coming down with the flu.

The twenty-four hour bus ride from the mountains in Colorado to Indianapolis gave me the opportunity to reflect upon my experience at the Frontier Ranch. I’d loved every minute of my Young Life trip. It was awesome to think how those boys had pitched in to carry me up the mountain to be sure that I reached my goal when it had to have been an excruciating experience for them. I met some very special people that week, had a great time, and saw some spectacular scenery. Those had been the best ten days of my life! Our bus pulled in the parking lot, where our parents were waiting for our arrival. From the moment my mother laid eyes on me, she could tell that I was sick. I told her about my muscles giving out while climbing up the mountain and how I’d started feeling sick on the bus ride home. She said she would call our doctor right away the next morning.

Little did I know that what lay ahead would alter my life completely. I’d gone to camp that August as a wide-eyed teenager with the entire world before me—a happy, healthy girl who led a very active lifestyle. Anything seemed possible, and opportunities were limitless. I had great expectations! The news I was about to receive would convert me from active participant to spectator. The plans and goals I had for my future would soon be distant memories.

Have you lived through a chronic illness or a tragic event in your life? Did you question how God could use such a horrific incident for his glory?

When I Am Weak Then I Am Strong is an account of the many varied experiences that Pam Gray endured and how God used each of these occasions to strengthen her faith. Later, God used these heartbreaking episodes to benefit others who were going through the same thing. Pam found that when she was at her weakest points in life, that is when God made her strong.

• How to cope during a traumatic event or devastating diagnosis

• How to keep your faith during adversities

• How to minister to others

• How to make your life count

God can use your tragedy so that others can see Jesus Christ and his wondrous grace, love, and mercy.

Pam Gray is an inspirational woman who has served the Lord with her husband for thirty-seven years. They currently reside in Huntsville, Texas, and have three lovely grown daughters and nine beautiful grandchildren.

Pam is a speaker, teacher, and ordained minister's wife who has served in six different states and on the Mission Field in the third-world country of St. Vincent.

Pam loves to encourage others to keep their faith as they face the many challenges of life. She herself endures several chronic medical conditions and has been through numerous traumatic events. She knows firsthand the struggles of standing strong in faith as the world around you seems to be crumbling down. Pam, Bob, and the girls have lived in times of plenty and times of need. They continue to grasp the concept of "learning to be content, whatever their circumstances."