The Death Experiences of an Average White Woman 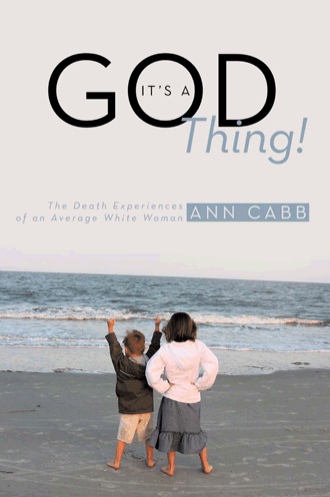 Chapter 25 ANGEL OF DEATH IN MY CAR In spite of Hal’s opposition, I continued to see Dr. Nan on a monthly basis. It was now eighteen months after my hysterectomy, and I was having severe abdominal problems. After extensive tests I was on my way to an appointment with Dr. Jack to get the results of my next challenge. I was tooling down Interstate 85 in my burgundy Monte Carlo for the short trip from Anderson to Greenville, South Carolina. I loved the way that car handled on the open road! With the car radio blaring and me singing off key, I looked over to see a bright, deep blue dot of light on the dash of my car. I did a double take--it was still there. I reached to turn off the radio—the blue dot did not move. I drove on, glancing to confirm the unmoving blue dot’s continued presence. Looking in my review mirror, I saw cars going westward as I proceeded eastward. I also saw an eighteen-wheeler ahead of me. Confirming the traffic flow was my reality check. Without thinking, I started laughing and said, “I do not know who you are or what you are, but kindly get out of my car!” The blue dot rose and went forward through my windshield and rested on the left front hood of my car that was traveling 65 miles per hour down Interstate 85. Breaking out in laughter, I thanked my visitor for obliging my request. After dutifully checking the traffic again, I looked back at my hood, and the visitor was gone. My appointment did not go as I had hoped. I was told I had to have more surgery because the wall separating my uterus and my intestines had weakened and was about to collapse. The surgery had to be as soon as possible. Unknown to me, Dr. Jack did not have a good feeling about the surgery; in fact, he felt it could be fatal. All I was told was of the normal risk involved with the surgery. The following happened during my appointment with Dr. Jack. I was asked to undress and put a sheet over me. Dr. Jack and a nurse came into the examining room, and he visited with me about the test results. He did one more examination. He then excused the nurse so we could talk privately. Covered in the sheet I sat up on the end of the examination table. I was securely wrapped in the sheet. As Dr. Jack talked, I intently listened, looking him in the face. Suddenly his face disappeared and a distorted, mean, black, blurry face appeared; it was an evil face. I could still hear Jack’s voice, but his face was gone. I blinked, pulled the sheet up to my chin, and then rubbed my eyes with the edge of the sheet. Shaking my head, I looked back at Dr. Jack. He stood there, bewildered by my actions. He asked if I had any questions. My response was no. The surgery was scheduled for the first week in May. I left Dr. Jack’s office angry and disappointed in my body. I wanted all the physical issues to stop! Little did I know--the blue dot in my car was the Angel of Death that would come to guard me and take me home during my surgery. It was several years later, in my hospice experience that a Catholic priest told me about the blue dot’s being the Angel of Death! It’s A GOD Thing! For he will command his angels concerning you to guard you in all your ways; Psalm 91:11

It’s a GOD Thing is a culmination of the death experiences I have lived. This book is to tell the world there really is more than this earthly life. It is imperative for people to be aware of what their choices will bring to themselves beyond this life.

“… I looked back at the elderly lady to confirm what I knew to be true—yes, she was dying—they were waiting for her… I watched the angels watch the elderly lady’s loved ones do what humans do to get prepared to lose someone they love. Their presence radiated feelings of peacefulness and love, feelings that had no words… “

“What did the angels look like? Any adult you see on the street, except they were in robes and were transparent. They, a male and a female, stood at the end of the elderly lady’s bed. I could see the wall behind the entities who were silently standing at the end of the bed, waiting. The entities turned and looked at me without showing any emotions or speaking, and I knew they knew I could see them. Relatives of the elderly lady milled around the bed talking to each other in low voices. Some of the relatives walked right by the angels with neither acknowledging the other.”

I am currently a high school English/ College Instructor of Writing, Psychology, Ethics, and Interpersonal Communication Skills. My Education: Bachelors in Psychology/English; Secondary Education Certification; Master’s in Social Science, and Counseling; Certified: School Counseling/ESL. My hobbies include quilting, knitting, reading non-fiction, and gardening. I reside close to my two daughters and their families. My greatest joys in life---my four grandchildren, the grandest GOD Thing of all!