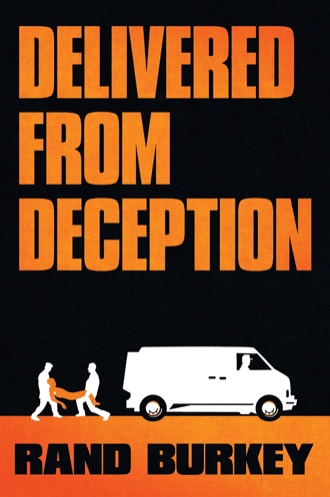 On that wintry day, ‘the kind that seemed perfect for kicking back in front of a wood-burning fire with a few friends’, I found myself not by a fire, but instead - curled fetal position in the corner on a mattress in strange white van, held against my will by some silent Neanderthal look-alikes. My father sat quietly in the passenger seat. He did not turn to look at me. A silent, blond-haired guy was driving. I made the decision to acquiesce, remain silent, and lay quietly on my side to decrease the probability that they would do whatever evil things they had in mind. I was thinking, “I must be one terrible person, so out of fellowship with God that I failed to hear and see His forewarnings of this abduction.” I chastised myself for being so out of touch with Him. I was enormously annoyed with myself that I didn’t detect this wicked thing was about to erupt. “I should have known, I should have seen it coming, I should have prevented this,” I kept thinking. Had I heard God’s words of warning, I could have outwitted this god-awful scheme. How could I have been so blind that I did not see, while visiting with them just the day before, my parents had been influenced by Satan, and arranged this despicable deed? Believers of The Way know with unwavering certainty that Satan will do anything to disrupt the truth and persecute Way followers. Therefore, if persecution were to befall us, we knew it would be at the hands of Satan. “Satan must be laughing,” I thought, because he seized a perfect opportunity to have me captured. If I allowed it to happen, he was also going to have me ripped away from the truth The Way had taught me. A short while after the van ride began; my religious and philosophical concerns gave way to a physical problem. My fear worked in concert with the coffee in my kidneys and the tank-like suspension system of the van. Each bump felt like I was being dragged over a pile of boulders. I wanted to ask for a restroom stop, yet I feared that my captors might think I was plotting an escape. Regardless, I politely asked if we could stop. Their careful preplanning was evident; they said not a word, just handed me a twelve-pack Styrofoam cooler in which to relieve myself. One of the guys was nicknamed Wookie, I suppose because he looked like the Star Wars character. His long hair and beard were distinctive and scruffy. He assured me that their only intent was to talk with me about The Way and to give me some important information that The Way leaders had kept from me. I didn’t respond; I believed that God was going to deliver me from this unthinkable situation in a matter of minutes or hours or at the worst – in a matter of days. I distrusted the motley crew because I was sure that besides trying to rip me from my beloved truth that these morons had conned my parents out of their hard-earned money. Regardless, I knew that to accomplish their evil intent, they would have to put on a great show portraying themselves in attractive ways. Over and again, I wondered, “How could a person as intelligent as my father have allowed himself to be suckered into a scheme concocted by such a low-life group?” The conversation was one way, except when I asked for the cooler. After a while, the conversation dwindled to nothing, and that was okay with me. I finally asked permission to sit up since the ride on the mattress was uncomfortable. It was apparent that the nurturing and nesting instincts didn’t come naturally to these guys. At some point during the trip, they decided to put me into my parents’ car. Both vehicles pulled over at a roadside rest and as the car and the van pulled along side, one of the Neanderthal-look-alikes, Dugan, spoke for the first time. A beret topped his stern facial tone and piercing blue eyes. His biceps were the size of my thighs – or larger. He crossed his arms, looked at me expressionless, and said: “We are going to move you into your parents’ car. We can do this the easy way or the hard way, and we have done it both. What’s your pleasure?” I chose the easy way and reassured him that he need have no worries about me doing anything stupid. Now in my parents’ car, Wookie was on my left and Dugan was on my right. At that moment, I felt like a toothpick being held in place by two bricks. I am not a small man, but everything is relative – and in comparison, they were much larger, stronger, and more muscular than I was. My mother was in the passenger side, and “Chuck” was driving. I realized that all the way to the rest stop, the two vehicles had been communicating via CBs. I was matter-of-factly, almost politely, informed that we were heading to a “safe house.” We arrived at the house in Cuyahoga Falls, Ohio in the afternoon. I could not wait to get into the house, since I had to go to the bathroom yet again. Before they led me into the house, however, I had to sit in the vehicle for a short while. Dugan and the others first made sure that all escape routes were covered. Having done that, they led me to the room where I would spend a considerable block of time rethinking my involvement in The Way

Why would a quiet Midwestern couple resort to hiring a team of people to kidnap and deprogram their oldest son from a group that seemed to teach “high moral values”? What signs did they see that caused them to take such actions? How could a person who was raised in a Christian home fall for a group that had at its core bizarre and dangerous beliefs? How is it that a seemingly normal young adult could buy into the idea that this group had the only truth and would do anything to protect it? Alarming in its content, and frightening in its suggestion that anyone could be swayed to believe and defend to the death the ultimate truth, Delivered from Deception is the unvarnished look at how someone could be manipulated to be a terrorist for his or her beliefs, and how the truth will set men and women free.

Rand Burkey resides in northeast Ohio with his wife. Having completed his bachelor’s degree, he continues to write, teach, and speak. He is actively educating people how to reclaim their lives, facilitating their movement from victimization to victory.