How to Manage with a Magic Wand

(No, Don’t Hit Your “Problem Employees” over the Head with It!) 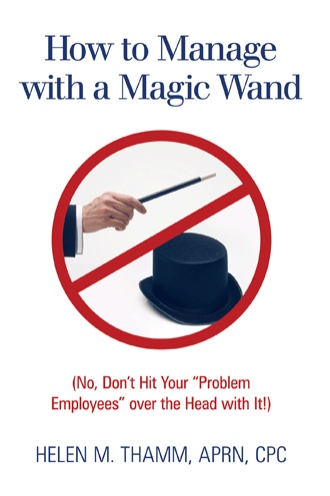 Due to her disastrous initiation in a nurse manager role, author Helen Thamm quit feeling like a failure after only eight months. She later developed her RESPECT TEAMS success process for new managers. The twelve chapters are a step-by-step how-to guide to help the neophyte female leader transform from a great clinician/technician into a confident and competent team motivator and developer, while simultaneously increasing life balance and satisfaction.

Chris, the new nurse manager, is the heroine of this story-form success guide. You’ll get a personal view of a developing leader’s progress as Chris reaches out to a knowledgeable and supportive mentor and gradually adds new techniques to her leadership toolkit.

Using the RESPECT TEAMS process, Chris is able to navigate the stormy seas of her first year in middle management, develop into what Helen was once called, “the manager with a magic wand—you can get them (staff) to do anything,” and learn Helen’s special leadership secret.

Helen Thamm is an Advanced Practice Registered Nurse (APRN), a Certified Professional Coach (CPC), and a career and wellness coach. Helen is the creator of NurseCareerSuccess.com and co-author of two books, Healing Hearts and The Gratitude Book: Best of Pets. Raised and educated in Chicago, she now lives in beautiful Thermopolis, Wyoming.