The Sacrifice of a King 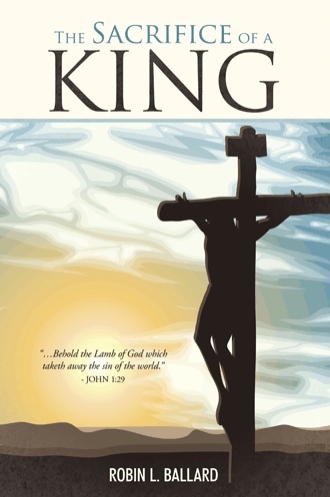 The Holy Spirit lives within us and he strengthens us so that we can be obedient to God. We cannot be obedient alone; we need God’s grace to maintain a righteous walk with Him. We are living in a day and time of great sin and apostasy within the Body of Christ, and true saints of God are not willing to risk loosing all for the pleasure of sin. Similar to the children of God in the Old Testament, we must hold onto the horns of the alter and allow God to prune us; which can be uncomfortable, but this process will allow the fruit of the Spirit of God to be revealed within us. We are not hopeless in this world, Jesus promised to never leave us nor forsake us; he is always willing to help in the time of need.

The Sacrifice of a King is a labor of love coming straight from the Throne of God. Author Robin L. Ballard believes that God has commissioned her to express in detail the love of Jesus Christ and the great depth He experienced to demonstrate that love. It is with heartfelt desire that she has written this study so that anyone who reads it would grow into a more intimate and deeper love relationship with Him. Now is the time for the Body of Christ to rise up and demonstrate their love for the Savior.

I am an ordained Evangelist and with the guidance and direction of the Holy Spirit, I was led to write this book so that Christians and non Christians alike would come to a better understanding of how and why Jesus Christ died for our sins on the cross.

As a child my mother, Willa Ballard taught all 8 of her children, as well as my Father Christian values and the importance of knowing and confessing Jesus Christ as Lord and Savior. Throughout my entire life, I've always had an awareness and respect for Jesus as God's son and as man's Savior. I have had personal experiences with many people during my lifetime that have not known or experienced a personal relationship with God's son. Therefore, knowing that I have enjoyed fellowshipping with Christ, it is my sincere desire to want others to share in the same intimate relationship with Him as I have.

I live in the New York City area, specifically the borough of the Bronx; I was born and raised in this borough. I have preached and taught in many churchs, soup kitchens to drug addicts and the homeless, as well as in women's conferences throughout the tri-state area. God has used me on many occasions to minister in the wokplace in bible studies and one-on-one; this has been fulfilling and satisfying as I watch God open His word and transform the lives of many.

My parents both died while I was a teenager, and I had to live on my own since the age of 21 years old. During the ages of 21-27 years old, I strayed away from Jesus and began making friends with many worldly and sinful people. Unfortunately, I got caught up in drugs and living a wild lifestyle that I realized was not pleaseing to God. Around the age of 25 I began to pull away from the crowd I was with, and searched for a better lifestyle; one that I had known when my parents were alive. Around this time, my god-mother became a born again Christain and little did I know that she was praying for my salvation. God answered her prayers and on Februry 25, 1982 I received Christ as Lord and Savior. My spiritual growth was slow at first, somtimes falling back into a sinful lifestyle, but finally in July of 1986 I received the baptism of the Holy Spirit. From that time until the present time, I have been faithfully serving God and have come to love ministering to people as I have witnessed the Holy Spirit fill, heal and deliver many from the sin and bondage of Satan. It's always a pleasure to see someone snatched from the hand of the enemy and the fire of hell. It' wonderful to see a person translated from the kingdom of darkness into the kingdom of light.