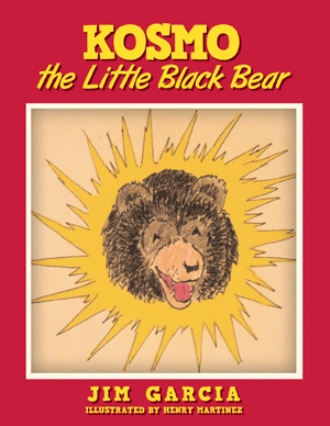 Just then, a bee zipped past them. A smile formed on Koso’s face. “I’ll be back in a little while. I’m going to follow that bee to his hive and get us some honey,” he told Kosmo. “May I go too,” asked Kosmo as he raised his head with an interested look? “Let’s go,” said his daddy. “Oh boy,” said Kosmo, excitedly. And the two ran off like bloodhounds following a scent, the motion of their bodies moving in unison like two fuzzy black caterpillars in a hurry.


At last they saw it. And it wasn’t very big, just a few honeybees were buzzing around, but the hole was rather large. The log was dried out and on its side, but it was dripping with so much honey. More honey than Koso had ever seen. Motioning to his son to come forward, Koso said, “Kosmo, this is a special treat for us bears. God has provided us with a sweet tooth which we can satisfy with this special treat called honey. We can get it, if we move slowly. A few bees will swarm about us, but they won’t hurt us because we’re specially equipped to withstand them. However, if too many of them swarm, we’ll be overwhelmed and that will hurt. So, we must move slowly and gently understand?” “Yes, daddy,” answered Kosmo. And so the two bears approached the log slowly and deliberately. They came to the log, lowered their heads into the hole, and began to lick the rich tasting honey. “Thunk!” “What was that,” asked Kosmo. Koso looked up and quickly rolled over onto Kosmo knocking him down as he yelled, “Look out!” “Thunk!” This time Kosmo could see what had made the sound. Two arrows and they had lodged in the log only a few inches from their heads.

Kosmo the Little Black Bear is a story for children, meant to teach them to think and observe. They will observe what happens when Kosmo’s father and the antagonist square off. They will learn the possible outcomes of such an encounter.

A word or two may be difficult for a child to understand. They have been deliberately placed in order to have the little ones go to an adult and ask for the meaning of the words. This is done to draw the family together. The adult may have to provide an example, thus helping to bring the family members together.

Along with the story is a lesson in the spiritual that a child will be able to grasp. Kosmo offers more than just an action story about a bear’s family. It offers positive life lessons that children will readily absorb.

Holding a ThB, the author is a graduate of International Bible College, class of 1973. He attended Pan American University, where his major course of study was mass communications.

Jim has served as an associate pastor at Sonrise Church and Lighthouse Christian Temple. Jim was on the men’s leadership team at Harvest Fellowship where he served briefly on the church board.

The author plays the drums and once opened for the Christian band Petra. Through the years, Jim Garcia worked as an announcer, newscaster, news and ad copy writer and technician at three radio stations.

A retired telecommunications manager, Jim currently works for a pharmaceutical supplier as a telecom analyst. He has been published in the International Yearbook, a periodical circulated in the United States and Mexico. Currently, Jim is co-writing a Christian sci-fi movie script and has more children’s stories in the works.