The Narrow Gate to Abundant Life 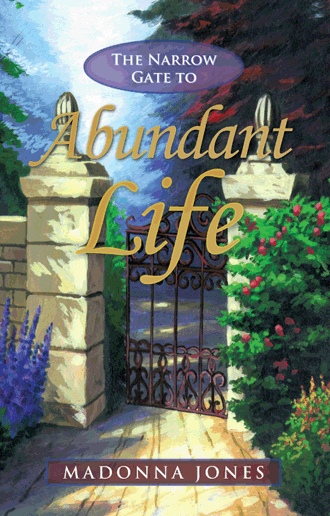 JESUS IS THE GATE

We have looked at the what , where, how and who of the KOG. Let’s look deeper into Matthew 7:13-14. “You can enter the KOG only thru the narrow gate.” Some translations say strait gate, when you look at the Greek definition it will say narrow, which according to the dictionary means, narrow from obstacles standing close about. We will talk more about these obstacles later.

Scripture goes on to say, “Broad is the way that leads to destruction.” Some think this destruction means hell. The Greek word for hell is hades, the place for departed souls. The word used here is, apoleia meaning ruin or loss, physical or spiritual. This isn’t talking about hell but a miserable life of ruin and loss, now. This gate to destruction is wide and many choose that way. The gate to life is very narrow and the road is difficult and only a few find it. People often think this means only eternal life, but if you will look in scripture when God meant eternal life, He said, eternal life, not life---like it is used here.

This life that Christians are living now is part of eternal life; eternal life is not only after death, but from the time you accept Jesus as your Savior on, into eternity with Him. The same word for life is used in John 10:10, Jesus said, “I came to give you abundant life.” He is talking about this life now; not just eternal life or as we think of life after death.

“Who has saved us and called us with a holy calling, not according to our works, but according to His own purpose and grace which was given to us in Christ Jesus before time began, 10 but has now been revealed by the appearing of our Savior Jesus Christ, who has abolished death and brought life and immortality to light through the gospel.” II Timothy 1:9-10 NKJ

Jesus brought LIFE and IMMORTALITY to light through the Gospel. Gospel means, Good News. It is good news that we can have abundant life now and then immortality (eternal life) with Him in heaven. Hallelujah—This is amazing. Jesus said, “I am the gate .” To what? Abundant life. He said He came to give life, not just ordinary existence, but abundant life. Perissos in Greek, meaning super abundance, excessive, overflowing, surplus, over and above, more than enough, profuse, extraordinary, more than sufficient. WOW!!! Not barely getting by, holding on until Jesus comes. Abundant life now, this life, not only in heaven.

He said he came to give life, not just ordinary existence, but abundant life.

“In the way of righteousness is life.” Proverbs 12:28 NKJ

Life, here in Hebrew means raw flesh. This is talking about physical life now not spiritual life in heaven. Back to Matthew 7:14 “The gate to life is very narrow and the road is difficult and there are few who find it” This narrow gate isn’t talking about getting into heaven, that only a few will find it.

“After this I saw a vast crowd, too great to count, from every nation tribe and people and language, standing in front of the throne and before the Lamb.” Revelation 7:9 NLT

Too many to count..that sounds like a lot of people to me, not just a few. So Matthew isn’t talking about getting into heaven.

God has and will continue to draw people to Him. I believe in these last days He is going to pull out all stops, His power released, signs and wonders whatever it takes so people will believe in Jesus and His finished work. Jesus said, “If you don’t believe Me believe the miracles I do.” John 10:38 NLT

He still wants to do miracles and He wants to use us.

Acts 4:13-14 NLT Peter and John had just healed a man through the Power of Jesus and they were teaching about Him. The teachers of religious law didn’t like it one bit and had them arrested. I want to encourage you to read the full account in Acts 3 & 4. The council members were amazed at the boldness of Peter and John for they could see that they were ordinary men, with no special training in the scriptures. This sounds like you and me.

Peter and John were enrolled in the Holy Ghost Academy. The Spirit of God gave them boldness, power, and wisdom and He will help us too. The boldness of Peter is amazing because the night Jesus was arrested he was scared to death to speak up for Jesus. He denied that he knew Him 3 times. What happened to cause Peter to do a 180? He saw the risen Savior and nothing or nobody, not even death, could make him back down from what he believed____ Jesus is our Savior!! He died and rose again. According to Acts 4:29-31 NLT this boldness and power is available to believers. All we need to do is ask and believe.

Christians have talked about miracles but haven’t seen them in the abundance that we could/should.The people of this world think they make their own miracles by hard work and being really smart. But there are times when something happens that only God can do. When this happens God gets the glory and people believe. It blesses God when we believe even when we can’t see the outcome. We just believe because He said so.

It blesses God when we believe even when we can’t see the outcome. We just believe because He said so.

How would you feel if the only time your kids talked to you was when they wanted something? And weren’t grateful for the last thing you did for them; not a pretty picture. But that is often how we treat our Heavenly Father. We are His body in this earth and He wants to use us to reach the world. We are blessed to be a blessing. People are attracted to abundant living. “Lifestyles of the Rich and Famous” fascinated us. Are people attracted to poor, sick, weak, miserable, mean, angry, sorry for themselves, depressed people? NO, that is why Jesus came to give us abundant life. But few will find it because the gate is narrow and the road is difficult.

Most of us have mediocre life, even Christians. ( Matthew 13:17) We are saved but still many are sick, full of fear, dread, sad, mad, offended, broke, busted and disgusted, full of anger, resentment, hold grudges, or full of pride, think it is all about them and what they want, addicted to _______________ you fill in the blank. This is not abundant life!

God has made a way to abundant life but it is narrow and difficult, so few find it, because they are on the wrong path.

God has made a way to abundant life but it is narrow and difficult, so few find it, because they are on the wrong path.

Are you sick and tired of being sick and tired? Are you fed up with being broke, busted and disgusted? Are your kids in trouble or is your marriage in shambles? Do you want to be free from every addiction or stronghold? Do you need some peace, love, joy , wisdom, deliverance or healing?

Jesus is the answer. He is the "Narrow Gate to Abundant Life". His amazing grace will not leave you in the same mess or misery that He finds you. Sound too good to be true? The Gospel means good news and by faith in His grace we can recieve all that God has provided for us in this life now, and then in heaven with Him for eternity. That is GOOD NEWS!!

Madonna Jones is a Sunday school and Bible study leader who believes that this life is all about grace, God’s unmerited, unearned, and undeserved favor.God’s grace has proven to be true in her life.She was born and still lives in Elkhart, Kansas, with her husband, Ray.