A Biblical View of the Local Church–Para Church Anomaly 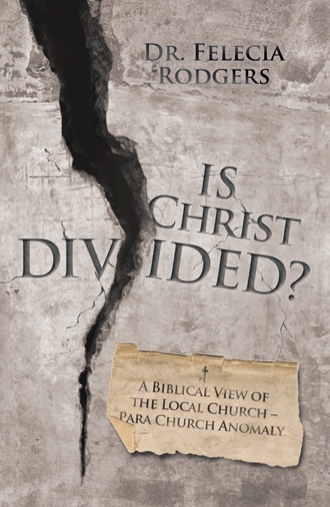 This text explores the controversy that exists between the local church and para-church organizations. It argues that the controversy continues because of perceptions surrounding the inherent roles and responsibilities of the local church. It also maintains that the assumed authority of the local church has displaced God’s authority and the universality of the Church. These arguments are predicated upon biblical theology and the historical transformation regarding the New Testament Church. Analysis of scholarly literature reveals sociological, theological and historical perspectives which elucidate this discord underscoring the need for Christian leadership to explore and devise methodologies to create an intimate link between the two entities. The universal Church, biblically described as an interdependent system must strive for synergy to accomplish God’s purpose. As it is written, “a kingdom divided against itself is laid waste; and a house divided against itself falls” (Luke 11:17). The church of the Bible is presented as a pattern of human life in marked contrast both to the values of secular culture and to the restrictive outlook that characterizes many religious groups. The Church is to be the manifestation of the philosophy to love God and neighbor exemplified in the life of Jesus who is the authority of every believer and demonstrated through the lives of the church. This research contributes to the body of Christian knowledge by presenting evidence of division and discord within the body of Christ, highlighting the rationale for antagonism between believers rather than the biblical rationale for unity and demonstrates the biblical perspective which supports cooperation between the local church and the para-church. The combined and coordinated actions of the individual parts of the universal Church, specifically the local church and para-church, can achieve more than can be achieved acting independently. The catalyst for reconciliation is comprehension of the relational intricacies advocated in Scripture regarding the body of Christ with subsequent practical application of this Scriptural intent relevant to the church and para-church. Jesus on His quest to complete His assigned task presented the epitome of the para-church being autonomous, independent, receiving His directives from the ONE authority, guided by the Spirit in spite of fierce opposition; and battling disproportionate interpretations and incomprehensible hindrances which threatened foundational truths. The title para-church is an official recognition of defiance by the church which refutes para-church membership as being its representative and commissioned according to Scriptural edict (Mat. 28:19). Mutual esteem and cooperation is certainly preferable from both a spiritual and a worldly perspective, to antagonism; and shared convictions promote a more promising foundation for progression in the purposes of God than divisive, contradictory beliefs.

The church of the Bible is presented as a pattern of human life in marked contrast both to the values of secular society and to the restrictive outlook that characterizes many religious groups. The church is to be the manifestation of the biblical instruction to love God and neighbor.

Is Christ Divided? takes a penetrating look at the identity of the local church. Is it comprised of believers with a passion to worship the God of Truth and live by His purpose, following His Holy Spirit that lives inside? Or is the church a group of individuals segregated by culture, class, economics and education, following the traditions of men?

Is Christ Divided? urges the original and philosophical concept of the church advocated by the Word of God. Each chapter reveals biblical support for cooperation amongst the brethren; the local church and the para church. Containing critical research of Scripture and analysis of church history, this book will provide proof that both populations have existed since the beginning without distinction. The intent is to bridge the gap between denominations, associations, local churches, para church organizations, missions and ministries.

Dr. Felecia Rodgers is a Christian who has devoted much of her time caring for the social, physical, and spiritual concerns of people with chronic lung disease. The founder of a not-for-profit charitable organization, she has a heart for spiritual restoration and the edification of the people of God; and conducts community outreach ministry throughout Greater Cleveland. Dr. Rodgers lives out her passion by sharing the love of God with the sick, shut-in, elderly, and poor in spirit within nursing homes and engaging young people in personal development, spiritual growth, and outreach. Dr. Rodgers is the author of Grafted Inn, a drama addressing the different perspectives people have regarding the message of the Bible.