The Children of the White Tree

Brady Barrett and the Firstlings Assignment 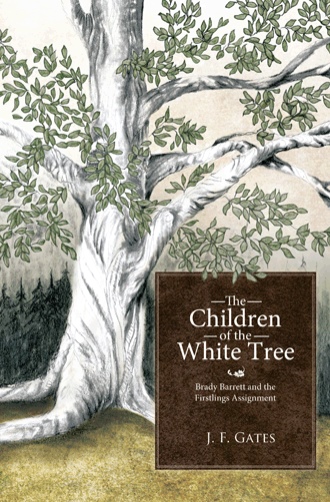 Seven children
Assigned to save the Earth
Ridiculous? Yes
Impossible? No
Not when the seven receive special gifts from the King.
Then, anything is possible!

An ancient evil has risen in the realms of the universe. The Dark Lord, Gribbain, the most feared sorcerer in the realms, has been released from his long prison exile to walk unhindered in his evil pursuit to rule them all. Long ago, Gribbain promised vengeance against his nemeses, Essais of Ken’rith and Ameth of Naveah. Above all else, he intends to fulfill that promise. He is Destroyer, and he will live up to his name.

But Ameth the Just, the Most High Ruler of the Realms, has chosen a peculiar army to overthrow Gribbain. He has chosen children. Brady Barrett and six others will join together in a quest to save the realms from Gribbain’s planned reign of terror, whether they want to or not.

Unbeknown to Gribbain, his top aide, Belthryd of Oricus, fancies himself as the true Dark Lord, destined to take Gribbain’s place. His plan includes the creation of the most hideous and fiendish monsters ever imagined. Creatures of incredible strength and intelligence formed in the dark belly of the Underworld.

The Seven, a nickname by which Brady and the other six become known, are caught up in a dangerous game of cat and mouse with an enemy they have never heard of, and from which they might not escape. Only the Most High Ruler knows the importance of convincing the Seven that their services are desperately needed in order for the powerful Navean Army to win the war.

The Seven have powerful gifts given to them by the Most High Ruler, gifts they were never aware of—gifts that, in the end, could destroy them.

J.F. Gates has six grandchildren, who inspired her to write her stories. Soon, it became a labor of love toward all children searching for heroes and heroines with whom they could identify, through the trials and tribulations of Brady Barrett and six friends. And, my goodness, secret portals, talking cats, dragons, friendships, adventure and danger...what more could a kid ask for? Her secret ambition for many years was to write stories that would let children know how much their Heavenly Father loves them. She feels her experiences from a childhood she remembers quite well, as a teenager, a married mother of three and then a grandmother of six and the lessons learned from those experiences well qualifies her to write books and books and more books for young people: books which tell of God's love and that He can be trusted, if they will stick with Him.

J. F. (Joan or Joni, to her friends) was born in Halifax, England, and at the age of two, she and her mother immigrated to the United States. She has always been a 'country girl', even though she's had to live in town part of her life. She loves animals, particularly cats, horses and (sometimes) dogs. She also enjoys visiting her children and grandchildren, writing (of course), camping, and craft fairs. She gives all the glory to her Lord Jesus for any success she may have in getting her books into the hands of children, and, yes, adults. We live in perilous times, and everyone needs a hero or a heroine whom they can trust to show them the way to Jesus and God's Kingdom.